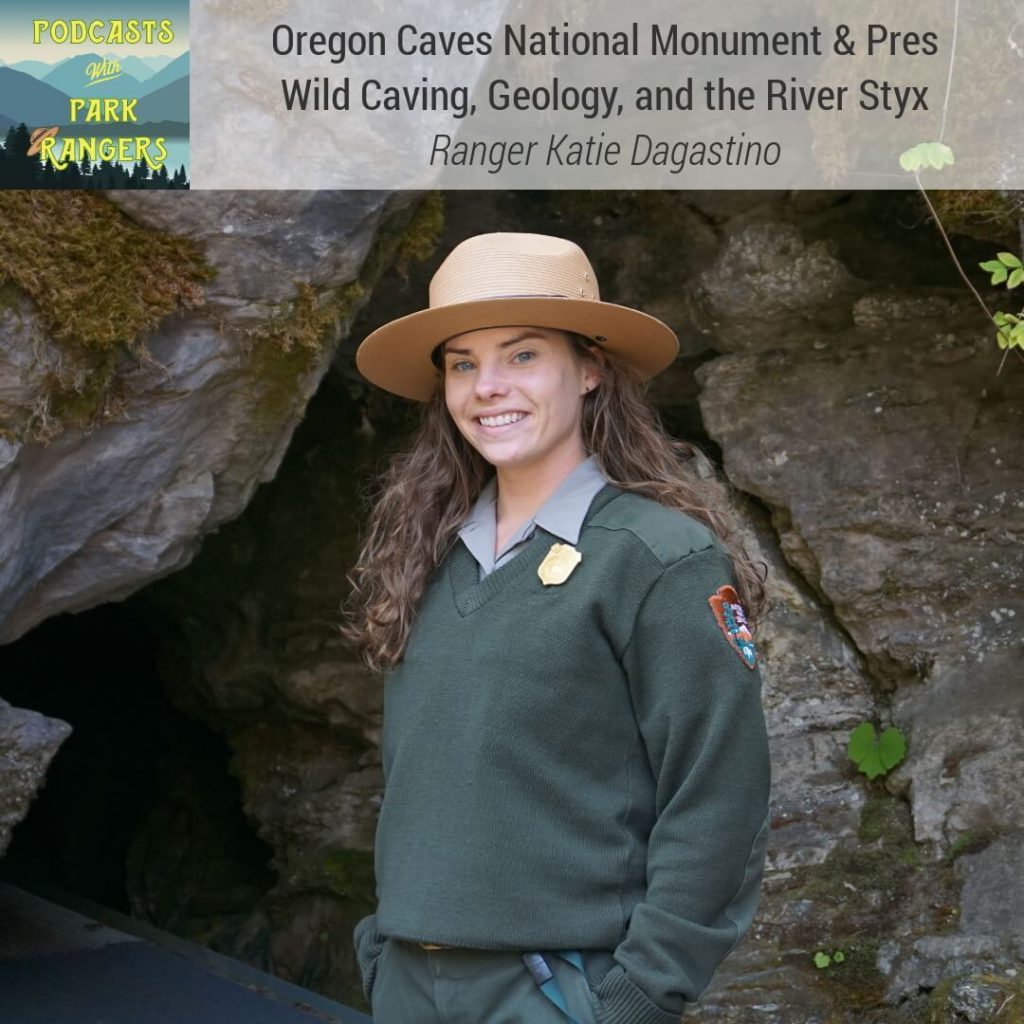 In the Siskiyou mountains at 4,000 feet exists one of the few marble caves in the National Park Service. On this episode of Podcasts with Park Rangers, we explore the unique features of Oregon Caves National Monument you can find strange geology, go wild caving, and visit the only Wild and Scenic river underground called the River Styx.

Ranger Katie works with both the Forest Service and the National Park Service. With the NPS, she’s been at Oregon Caves National Monument for 3 seasons. Her background in geology gives her a unique perspective on the park, and she guides tours within the caves all summer long.

Oregon Caves is located at 4000 feet above sea level in the Siskiyous, a sub range of the Klamath Mountains in Southwest Oregon. The area is home to 30 different types of rocks and minerals.

Many of the rocks found around the caves are found at the bottom of oceans or come from volcanoes. This includes serpentine rocks which are toxic when they break down, so plants and animals in the area are adapted to survive the poisonous conditions of the environment.

How the Oregon Caves Are Formed

The caves themselves are solution caves formed via carbonic acid and are much more intimate compared to a larger cave like Carlsbad Caverns. Cave decorations are formed via calcite.

The Oregon Caves are some of the few in the Park System formed out of marble. Around 250 million years ago, the modern day caves laid under the Pacific Ocean. Bacterial reefs formed and eventually become a sedimentary rock. The heat and pressure underneath the surface created metamorphic marble, and latere the mountain process uplifts the caves to over 4000 feet above sea level.

Carbonic acid traveled down and dissolved the carbonate rock to shape out the caves. And water also aided in the formation of the tunnel systems. The modern day River Styx still flows through and shapes the cave today.

Elijah Davidson discovers the caves while hunting. His dog found a bear and chased it all the way into the cave, and the rest is history. By the 1880s people go on tours all throughout the cave and others try to claim mineral rights within.

In 1909, Oregon Caves becomes a National Monument. The Civilian Conservation Corps (CCC) changed how people traveled through cave when they created a series of human made passageways. Prior to the CCC’s work, exploration of the tunnels required a lot of belly crawling, including through the River Styx. Today, you can still go wild caving and belly crawl throughout the cave and the river.

The CCC also diverted part of the River Styx to flow through the dining room of the Oregon Caves Chateau.

The River Styx is first and only Wild and Scenic River located underground, and derives its name from Greek mythology. In mythical tales, the infamous river flowed between the living world and the underworld.

Several of the rooms and formations have spooky names given by early explorers like the Ghost Room and Adam’s Tombstone. Visitors might see shadows and become nervous about otherworldly beings.

Ranger Katie speculates the caves spooky nature might be one of the reasons why they named it the River Styx.

Visitors can buy tickets for wild caving tours at Oregon Caves. While the wild caves don’t contain nearly the same amount of cave formations, visitors can crawl through marble and clay caves much like those who first discovered the caves.

It’s like rock climbing underground where you need to squeeze and belly crawl with the cave wall inches from your face.

The main caves receive about 75-80,000 people touring a year. However, the off trail tour gets only about 1,500 visitors per year. The group works as a team with only their headlamps guiding the way.

Ranger Katie says people on the tour feel quite connected with one another. If someone feels they don’t have the strength to climb up something, others will help. People get through the tour in about 3-4 hours without complications and finish with a sense of camaraderie.

On hikes, Ranger Katie loves to share the unique plants or show visitors the toxic serpentine rock. Some plants, like the darlingtonia, are carnivorous because the soil is so toxic they adapted to eat insects instead.

Many of the species of the ecosystem above ground are connected to the cave environment below. For example, the sideband snail lives near entrances of the cave and needs the calcite from the marble to form its shell.

In other instances, the rain and snow melt travels from the surface and picks up carbon dioxide before it makes its way into the cave, creates cave formations, and as it filters through it flows out through the cave creek.

In order to create the roads and buildings at the monument today, the local businessmen called the Oregon Caves Cavemen helped fund the National Monument.

They’ve been known to kidnap local politicians to get funds for projects at the caves and they helped fund the construction of the Chateau.

Several different species of bat hibernate in the caves during the winter. The park does bat net surveys to study what kind of bats use the cave and to determine if the bats have White Nose Syndrome (WNS).

The state of Oregon and the park do not currently have WNS. However, Washington state recently reported incidents of WNS.

It’s important avid cavers are responsible about not wearing the same clothing from one cave to another. Even if the cave didn’t have WNS before, it can take a few months to show up. Visitors can find out how to decontaminate their clothes and be a responsible caver at whitenosesyndrome.org.

More than 8 million bats have died in the past 10-12 years, and to stop the spread of the disease we must be smart cavers. If you visit Oregon Caves after visiting another cave, let the staff know and they can help you decontaminate your shoes or camera.

Katie’s Interest in Oregon Caves National Monument and the NPS

Katie focused on hydrology, and because of the wild river — Oregon Caves was a natural fit. In addition, she grew up visiting caves with her family. Season after season, she returns to the monument.

She loves to connect with visitors at their level. All sorts of people travel through the caves, and she hopes to show why the park is worth protecting. Because, if people can’t connect with a park, they may not understand why it needs to be part of the Park Service.

Katie emphasizes these are our National Parks in every tour she gives. We can enjoy the lands how we want in a respectful way, and it’s also our job to preserve them for us and for future generations.