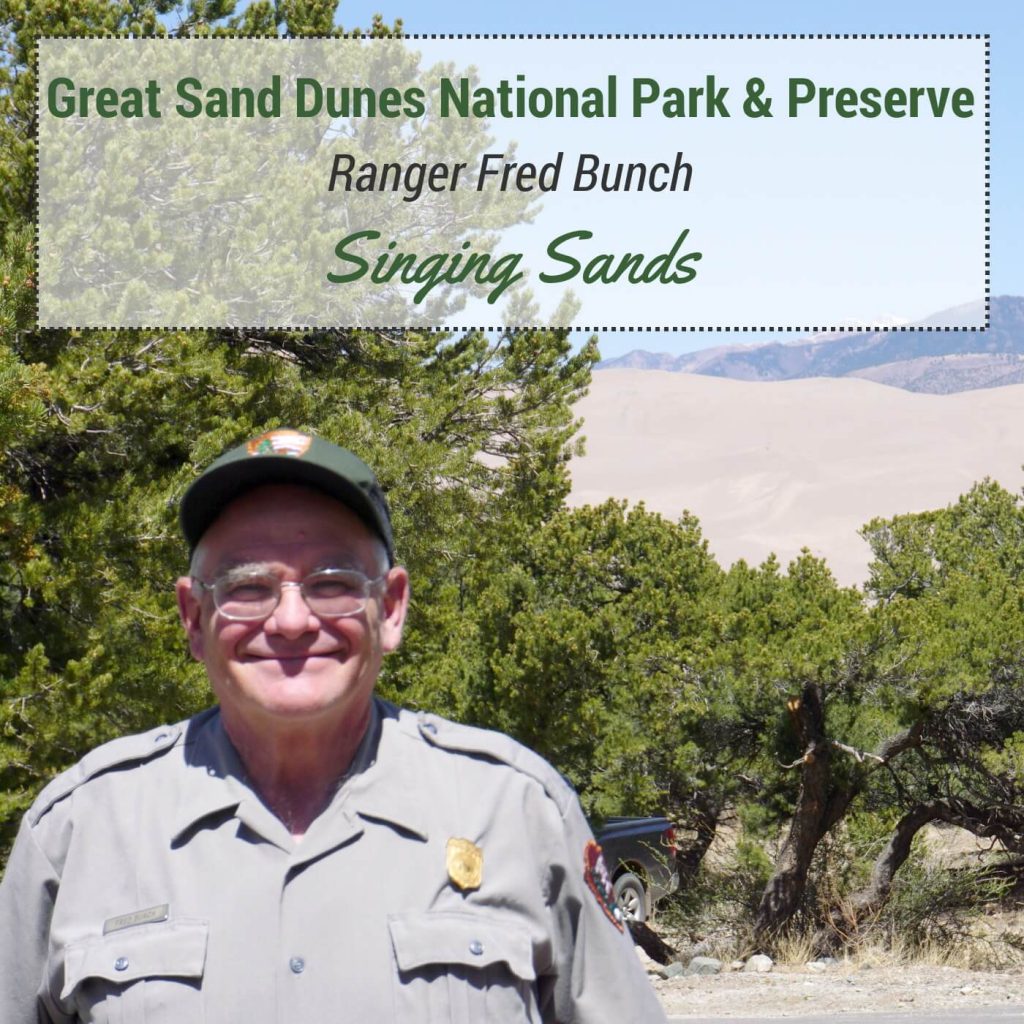 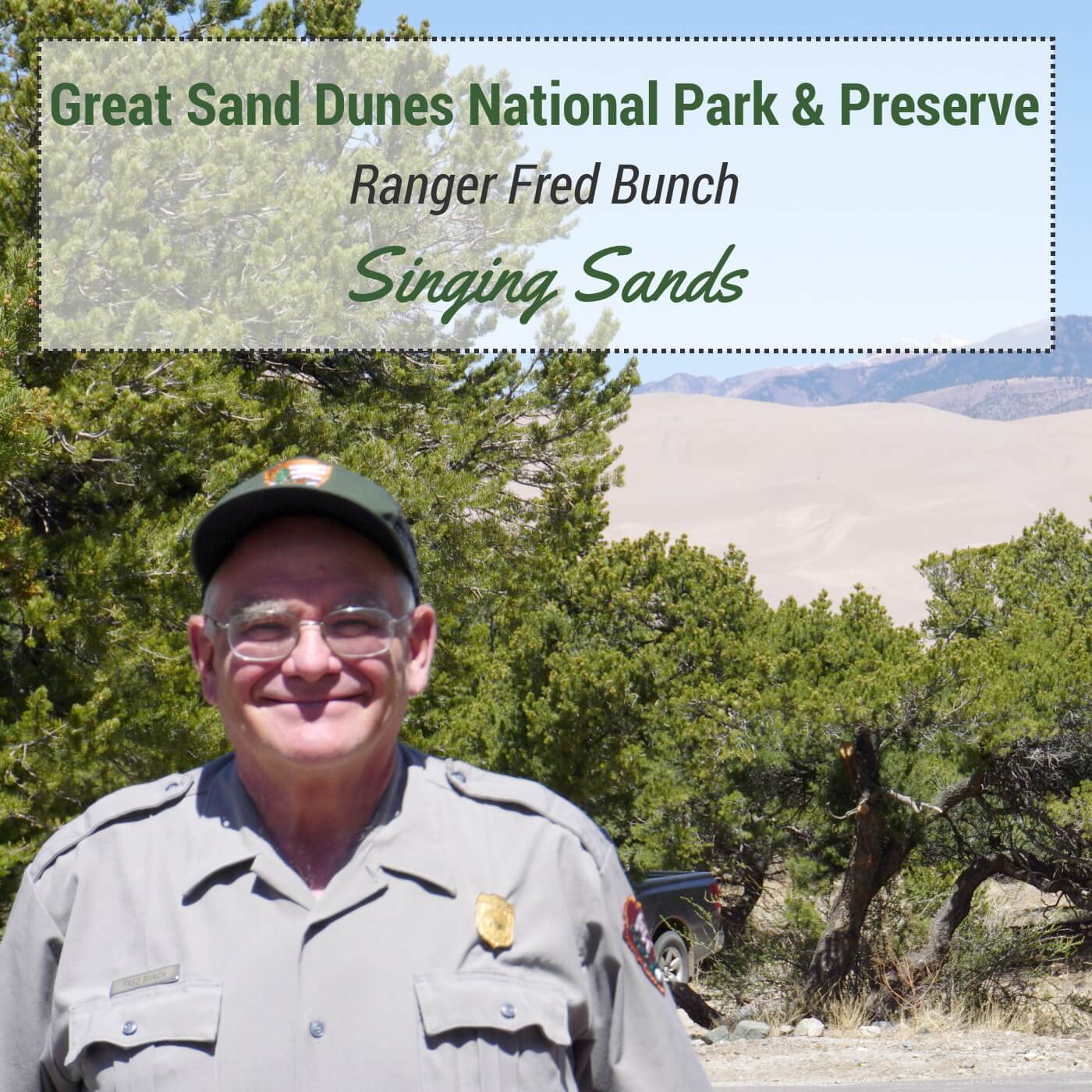 The tallest sand dunes in North America are located high in the mountains of Colorado. But did you know, they can sing? Great Sand Dunes National Park has many unique features if you know where to find them. With the help of Fred Bunch, the Chief of Resources Management at Great Sand Dunes, we’ll learn about the park’s secrets.

On this episode of Podcasts with Park Rangers we explore the waves of Medano Creek, the spectacular night skies, and the singing sands of the dunes.

Fred has been a Park Ranger since 1978 at 8 different parks, including Great Sand Dunes. He started his career in interpretation and moved into resource management. After a nearly 30 year career at Great Sand Dunes National Park, he is the Chief of Resources Management at the park.

Ranger Fred became a Park Ranger because it aligned with his interest in the outdoors and the sciences. Additionally, he likes the philosophy of the NPS and its ability to protect and set aside these spaces for future generations.

How Are The Dunes Formed?

The dunes at Great Sand Dunes National Park are the tallest in North America.

Additionally, the wind comes from the other direction away from the Sangre de Cristos and pushes the sand upward to create tall dunes.

Two creeks, Medano Creek and Sand Creek transport sand from the top of the mountains down to the dunes again. It’s like a vortex that cycles the sand up and down the mountain, only to be deposited in the dune field.

Medano Creek – A Creek With Waves

A unique feature of Great Sand Dunes National Park is Medano Creek. The creek’s waves are created via surge flow which works like this:

The USGS has studied Medano Creek’s surge flow and states it’s one of the best examples of surge flow in the world.

The size of the creek can vary from year to year due to the thickness of the snowpack. And, sometimes the creek sticks around in the winter due to fall precipitation. This year, 2018, the creek will probably be a bit dry because the snowpack is light.

Great Sand Dunes’ Medano Creek is great for recreation because it’s Colorado’s only beach. On hot summer days, families play in the water and have for generations.

The dunes are “User-Friendly” so visitor impact on the dunes is small. And, the popular sandboarding activity doesn’t harm the dunes either.

The bigger issue is the current infrastructure and the influx of ½ million people. Congestion, parking, and sanitation are the major issues of concern.

Infrastructure changes are in the works to provide a better experience and get people into the park easier. Congestion management studies and expanded parking are investigated.

To avoid the crowds, it’s suggested to come in the shoulder season if possible.

The sand dunes are some of the quietest places in the park system. Fred and his team have measured it!

Even though the dunes are quiet, they can also sing! It’s a phenomenon called the booming sands. An avalanche of sands creates a vibration as the sand falls down the dune, and sounds much like a cello.

The Value of Night Skies

A large percentage of the world population is from urban areas and you can’t see the milky way. At Great Sand Dunes, it’s their goal to offer this, and the park is open 24 hours so you can experience the park after dark.

Also, the night sky is a cultural resource. Human stories, myths, and legends sometimes come from the night sky. People have always looked at the skies and tried to interpret what’s there.

Are there more stars in the sky than grains of sand at the Great Sand Dunes?

LIDAR also helps figure out dune movement and other features.

The nature conservancy owns Medano Ranch to the southwest of park – there is about 1700 bison. The ranch is in park boundaries, and the park wants to acquire the land.

The question now is when they purchase the ranch, do they continue the bison operation?

The landscape needs to stay healthy and robust, and both elk and bison use the land. The bison are domesticated and fenced in, but the elk are everywhere in the park.

Scientists created research plots to determine how the landscape survives with and without elk and bison pastures. To preserve land, they must pay attention to how ground-nesting birds, amphibians, and heavily grazed areas affect wildlife use.

The bison ranch must move from an agricultural operation to a park service operation.

The park opened comments to the public to see what they would want to do. Once a decision is made, the nature conservancy will phase out the agricultural operation and phase in the bison when the land changes hands. This may mean reducing or moving the bison entirely.

In the 1980s, the US Forest Service and Colorado Parks and Wildlife reintroduced native Rio Grande cutthroat trout to restore Medano Creek to its original condition. Now, they are doing the same for Sand Creek. The removal of non-native species of fish and restocking with native fish is necessary for restoration.

National Preserve and Park Service policy is only native species should inhabit the land. Additionally, restoration of habitat for the cutthroat trout is necessary so the fish won’t become endangered. The non-native fish are stressing the cutthroat trout causing their population to diminish.

The park has numerous world-class resources:

Paleo-Indians who survived off of now-extinct megafaunas like the mammoths, saber-tooth cats and ice age bison. The Smithsonian studies one archaeological site in the park — a kill site from 9000 years ago where Folsom hunters killed ice age bison.

Legend of the Frogs

Geologically, volcanic activity from 2.5 million to 400,00 years ago dammed up the Rio Grande to create Lake Alamosa. At the time, legend says frogs lived happy lives in the lake!

Around 400,000 years ago the natural dam burst. The lake drained and all the frogs died, but their spirits are still there. And, if you spend enough time in the Alamosa area a frog spirit will get into your soul. You may leave, but you’ll be back in Alamosa because the frog spirit wants to return home.

The Great Sand Dunes is an incredible resource, and great people want to keep it protected. The people are dedicated to understanding and interpreting the resource. But, it’s also fun to use recreationally.

In the same day, you can hike in the dunes and learn about how unique the environment is, how it’s important, and how it should be protected.

The NPS is important to Fred because it aligns with his values and philosophy. The parks are available for everyone to enjoy and are a constant in America.

“Nature bats last,” so we need to listen to what nature tells us so the parks persist through generations to come.

The Friends of the Dunes is a non-profit citizen support group for Great Sand Dunes National Park. They’ve provided research grants, materials for the Junior Ranger Program, and telescopes for the night sky program in the Park. If you are interested in helping the Friends of the Dunes, check out their website at GreatSandDunes.org