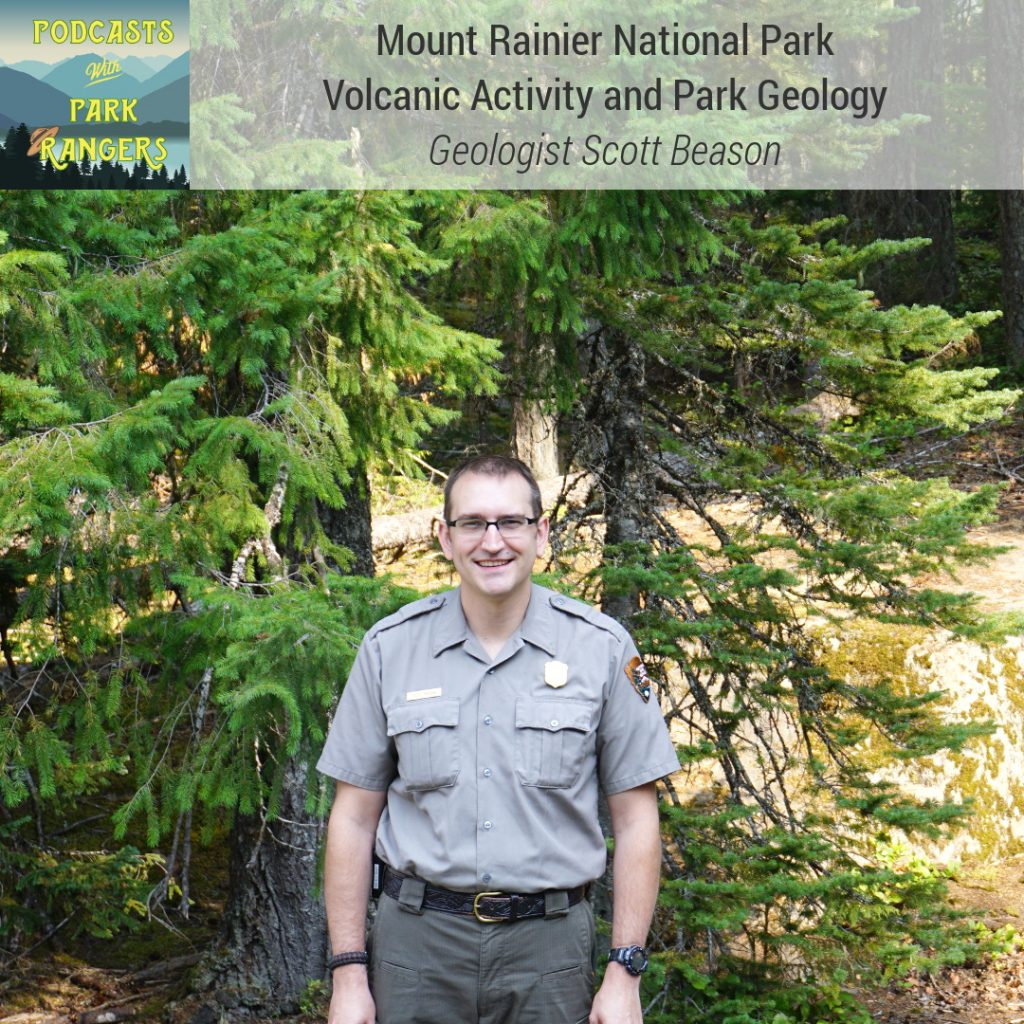 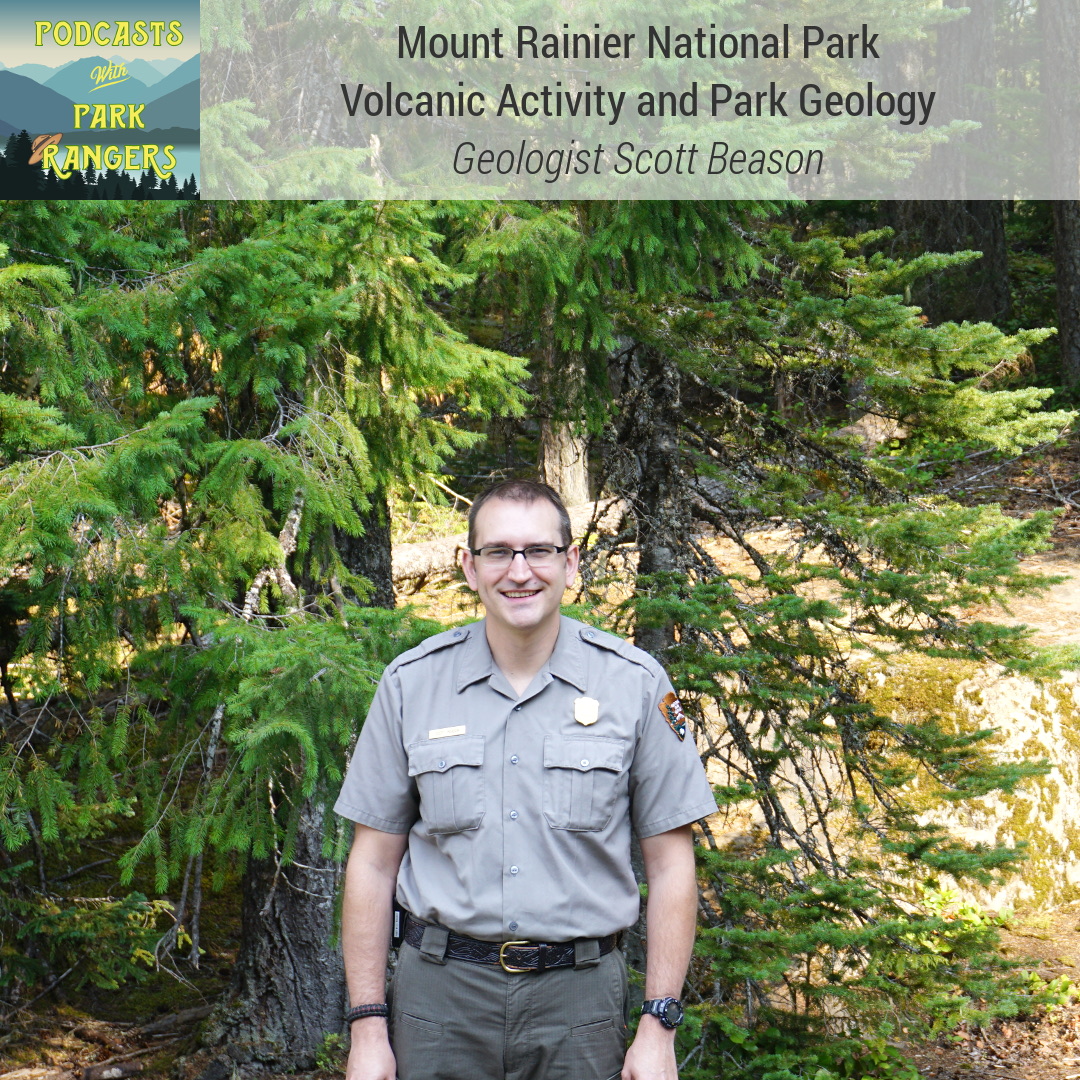 A trip to Mount Rainier National Park brings you through lush landscapes dotted with wildflowers. However, a beast lies beneath the park! The mountain is considered one of the most dangerous volcanoes in the world. Does that mean the park is dangerous? On this episode of Podcasts with Park Rangers sit down with a Park Geologist to learn more about the volcanic activity and geology of Mount Rainier National Park.

Scott is one of the few Park Geologists in the National Park System. According to him, there are about 8-9 people who work in the specialty.

Since 2004, Scott has worked off and on with the National Park Service and started as an intern at Mount Rainier. Through a variety of roles: interpretation, law enforcement, and resources — Scott found a love for the NPS.

Additionally, the Pacific Northwest captured Scott’s heart. It’s why he now calls Mount Rainier home, even after he’s worked at other parks. As a result, he decided to work on the NPS resource team and study the geology of Mount Rainier after he graduated with his Master’s degree.

Mount Rainier is approximately 70 miles southeast of Seattle/Tacoma in Washington state. As the fifth National Park in the Park System, it spans 240,000 acres and a variety of ecosystems. Low elevation rainforest, sub-alpine areas, volcanoes, and glaciers draw over 2 million visitors a year.

The mountain is a beacon in the Pacific Northwest at 14,410 feet tall. And when you consider all the other mountains in the area are around 3,000 feet, it stands out for hundreds of miles around. In addition to the height, it’s also the most glaciated peak in the Cascade Mountain range.

Mount Rainier is considered to be an active volcano because it has a magma source beneath the surface. And over ½ million years, it’s erupted over and over again. Evidence of both magma eruptions and lahars exist.

Small earthquakes are a regularity with about 3 per month. However, they’re quite small — measuring at less than a 1 on the seismometer. Evidence of more volcanic activity is seen through hydrothermal vents on Mount Rainier. Water heats and pressurizes from a source several miles beneath the mountain.

How Does a Subduction Zone Work?

The process brings ocean water down into the subduction zone to create a pressure cooker. The plate begins to sweat and it decreases the temperature needed to melt rock which leads to the formation of magma. And since magma is less dense, it flows upwards towards the surface to create pressure release valves aka volcanoes!

The last known eruption of Mount Rainier was 2000 years ago. In the late 1800’s, some accounts indicate steam aka phreatic activity near the summit. However, geologists have never found evidence of such an eruption and believe onlookers were probably fooled by clouds at the peak.

In spite of current calmness, the geology of Mount Rainier indicates it will erupt in the future. Past successive eruptions built up ridges and layers on the mountain — much like a layer cake. Ash and lava flow blanket the area after repeated eruptions and build up over time.

Today, Mount Rainier is in one of the calmer time periods.

There are different types of eruptive volcanoes:

Mount Rainier is a stratovolcano because of the layer cake effect and how it towers upwards. However, the volcano has a small base.

One of the Most Dangerous Volcanoes in the World

Two factors contribute to Mount Rainier’s designation as one of the most dangerous volcanoes in the world:

About 5,600 years ago, the geology of Mount Rainier shows exactly this happened. They named the eruption the Osceola Mudflow.

Episode 8: A Fossil Day at Florissant features historic lahar flows in Colorado and how lahars contributed to the preservation of insect fossils.

Evidence shows a side of the mountain failed during the eruption and a lahar traveled along the White River north towards the city of Enumclaw. Enumclaw sits about halfway between the volcano and Seattle, and they believe the flow only took a couple hours to get there.

Today, the primary concern today is not so much the gas and ash from an eruption, which would probably stay within the park boundaries, but rather the lahar flows.

How They Monitor the Volcano

A seismic network of about 5-10 stations in the park at various altitudes help monitor the Mount Rainier’s activity. Due to the danger it presents to humans, it’s the most well-monitored volcano in the Cascade Range.

Seismic activity is a good way to know when the volcano begins to wake up. An increase in activity and harmonic tremors would show up on the seismographs. A harmonic tremor is similar to when fluid moves under pressure in an old house. You can feel or hear it on the opposite side of the house where the water flows.

If geologists saw a harmonic tremor, they would know fluid began to move vertically under the surface.

Earthquakes are common with around 3/month. They sometimes see swarms of hundreds. However, volcanoes swarm a lot so that alone doesn’t mean much. If the amount of swarms increased or the period between them decreased significantly, then they would begin to worry.

In particular, west Rainier contains a seismic zone known for bigger earthquakes. However, anything over a 4.5 is unusual.

The USGS also placed GPS and deformation stations around the park. The stations monitor the altitude and distance between various locations. If one moved higher or to a new position, they’d know the volcano is “inflating”.

Current Research into the Geology of Mount Rainier

The USGS has a program to understand more of the eruptive history at Mount Rainier. Researchers look at ash and lahar deposits to date them. Additionally, they monitor gas coming out of the volcano.

Geophysical studies look at the stability of the rocks around the park. Much of the rock is andesite – an intermediate volcanic rock. Andesite is red or black in color with white silica crystals.

The silica forms chains, which trap gases in the rock. And, the more silica in the rock, the more explosive it is in an eruption.

Andesite can also degrade into clay found in big areas of the park. They’re concerned the clay could be washed away in a lahar and create an area more prone to blow out during an eruption.

Not All Lahars Occur During Eruptions

Lahars can happen in the park without an eruption.

The last known lahar at Mount Rainier occurred 500 years ago called the Electron mudflow. The rush of water traveled northwest of the park to Orting along the Puyallup River.

The andesite clay buildup mentioned previously is along the same side of the mountain where this lahar occurred. So, the USGS placed a couple types of monitors near the valleys:

If the USGS saw the seismic signature of a lahar and more than one of the deadman alarms going off, they’d know of an imminent lahar and set off the lahar sirens.

In several of the cities around Mount Rainier and Orting, in particular, has lahar drills where people go to higher ground to escape the path of a lahar flow.

Travels to Colombia to Study Lahar

USGS partners with the Department of State to send people abroad through the US Aid program. The program allows an exchange of information between countries as well as help in disaster situations. Employees monitor, provide warnings and help in response to disasters.

A binational exchange of emergency planners allowed Scott to travel to Colombia and learn how they built their systems to monitor volcanoes. Then, the USGS brought the Colombians to Mount Rainier to learn from us.

The Devastation of Nevado del Ruiz

In particular, the 1985 tragedy of Nevado del Ruiz brings to light how devastating a lahar can be. Nevado del Ruiz is very similar to Mount Rainier — both are stratovolcanoes composed of andesite with glaciers on top.

An eruption created a pyroclastic flow which melted the glaciers and started a lahar. Armero, a city 60 miles away, didn’t get the warnings they needed. Residents couldn’t evacuate in time, and almost 25,000 people lost their lives.

The tools to predict and alert people to a lahar didn’t exist at the time. However, systems are in place today because of the lessons learned at Armero. Colombian geologists don’t ever want a repeat of the tragedy again in their country.

Since 1985, other more devastating eruptions occurred in Colombia with few fatalities because of the warning systems in place today.

What Mount Rainier’s Geologists Can Learn from Nevado del Ruiz

As a geologist, Scott studied Armero in school. However, when he saw the volcano and talked to survivors, it drove home the point. They need to understand the dangers of lahars so such a tragedy doesn’t happen in the United States.

Studying the geology of Mount Rainier and the work to build and improve disaster plans help the USGS and NPS build seismic alert systems. Now, they can warn residents downstream and allow for timely evacuation.

Orting is one of the fastest developing areas near Mount Rainier. The town sits in a flat area right next to the volcano, which could allow a lahar to spread out across the plains. So, when the Colombian geologists brought up how similar the surroundings of Orting are to Armero, the USGS knew they needed to monitor the area well.

The people of Orting don’t have a first-hand understanding of the possible devastation a lahar could bring — the most recent lahar flow was over 500 years ago. There’s a current push to provide better education in schools from a young age about volcanic hazards and the proper response is an important disaster planning tool. As a result, the school has a lahar drill every year so they can practice in case of future dangers

The Ultimate Question: Is It Safe to Visit Mount Rainier?

Scott assures us Mount Rainier is safe! The mountain shows no signs of reawakening and is more akin to a sleeping person: sometimes they move around, but they’re still asleep.

While there’s potential for terrible destruction from a volcanic eruption, Scott lives just outside the park in Ashford and he isn’t worried. There’s monitoring, public education, and alarms to help keep everyone safe.

Scott’s Love for Mount Rainier and the NPS

Scott has a love for mountains and a special connection to Mount Rainier. Both the beauty and the geological features draw him to work there every day. He loves the opportunity to make new discoveries about the geology of Mount Rainier and improve how the park understands the volcano.

Scott is in awe of just how big Mount Rainier is — everything in the immediate area radiates out from the peak.

As for the National Park Service, Scott finds value in setting aside places where you can experience the world around you in its natural state — in a state untouched by humanity. To find solace without the modern amenities like cell phones is a necessary escape nowadays.

And, these places offer a unique experiences where people like Scott have access to a natural laboratory. For scientific research, we can examine what mother nature does on its own, and apply the lessons learned to other places in the world.