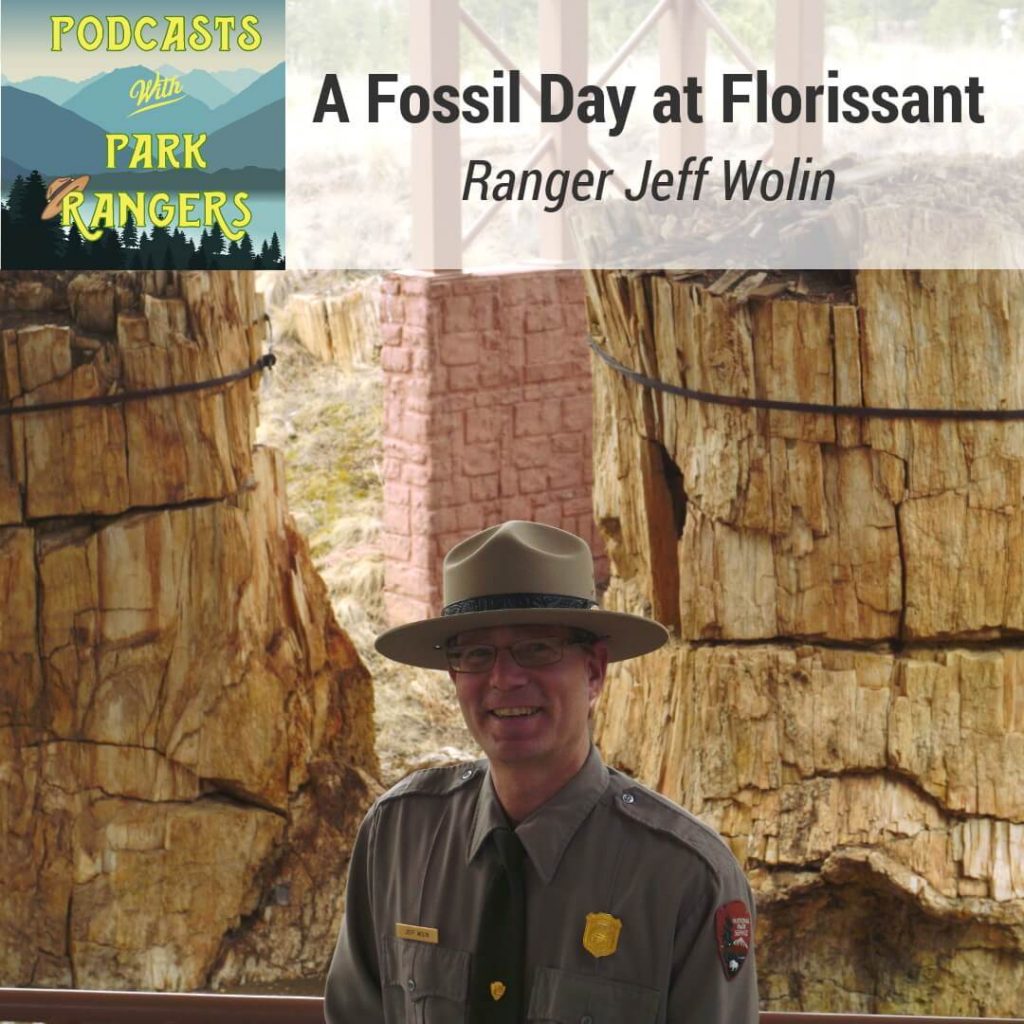 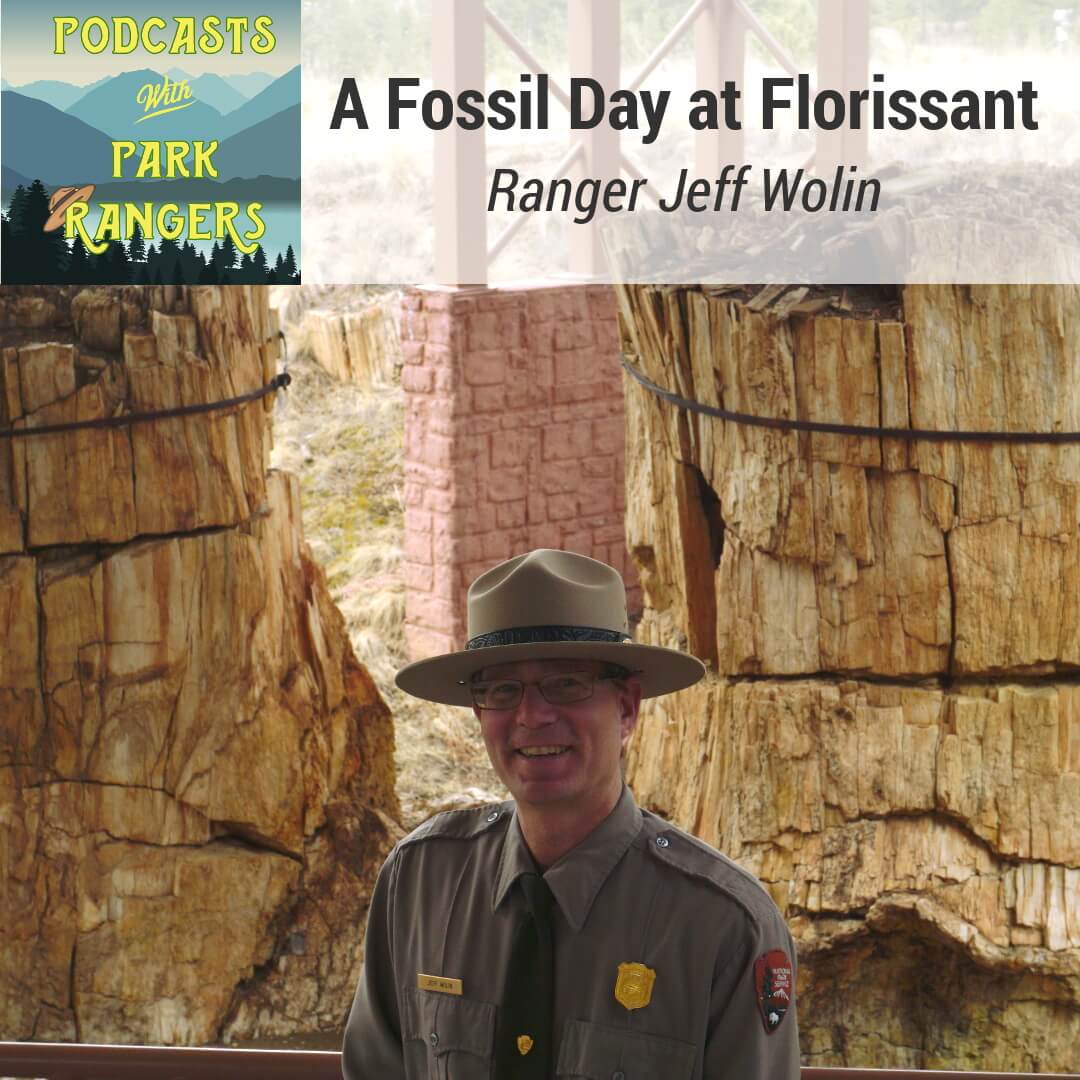 Plant and insect fossils and petrified tree stumps are the main attractions at Florissant Fossil Beds National Monument. But, many visitors leave remembering the unique human history. On this episode of Podcasts with Park Rangers: feuding tour operators, a story about Walt Disney and an inspiring story about a single mother and her homestead.

Jeff is the Lead Interpreter at Florissant Fossil Beds National Monument in Florissant, CO. Ranger Jeff grew up in the suburbs of Chicago and didn’t experience the outdoors until after high school. In the boundary waters of Minnesota on a camping trip with a friend, things just clicked.

Jeff started as an intern with the Student Conservation Association at Isle Royale National Park in 1991. He found an advertisement for the SCA in the Geography building of his college, and he wrote in to get a catalog of possible place he could be an intern. And since he had been to Isle Royale and loved it, he chose a position there.

He tapped into his love of nature and wanted to share that with others!

Florissant Fossil Beds is an hour west of Colorado Springs, CO. The monument is located in the mountains surrounded by rolling hills and meadows.

When most people arrive, they are unsure what to expect because it isn’t obvious at first. At the Visitor Center, people can meet with the rangers and get a better understand what there is to see.

The petrified redwood stumps are the main attraction. Measuring 10-12 feet wide, 10 feet tall and weighing 90,000 lbs. — they’re some of the biggest in the world!

It’s also one of the most diverse insect fossil sites in the world. They’ve found over 1500 species of insect, as well as leaf, mammal, fish and bird fossils. Visitors can see the fossils in the Visitor Center.

How The Fossils Were Formed

In the late Eocene era, 34 million years ago, the fossil beds was originally the site of an ancient lake. An ancient volcano buried the area in ash and sediment that entombed the insects and other life in a layer of what’s now shale.

Episode 21: Volcanic Activity and Park Geology features Mount Rainier, a modern day volcano like the one which created the fossils at Florissant Fossil Beds National Monument.

Microscopic fossils of pollen and diatoms (algae) were preserved in the lake as well.

The climate was warm and temperate. A wide variety of life, not found in Colorado today, was preserved. For example, tsetse flies which are only found in Africa can be found in Florissant’s fossil records. One of many instances of life found in warmer parts of the world at Florissant Fossil Beds National Monument.

When the fossil beds became a National Monument, part of the mission statement was to preserve and protect the geological and paleontological resources. They have an active paleontology group, including a paleobotanist.

Interns and postdoctoral students can work there. Excavations occur every few years, and they partner with universities and scientific groups all over the world.

In the late 1800s and early 1900s, people used dynamite to excavate the petrified trees stumps. This damaged the trees and caused cracks. Previous excavators put metal bands around the stumps in attempts to keep them together.

Stump stabilization is an important part of Florissant Fossil Beds National Monument to ensure no further damage occurs to the stumps. Freeze/Thaw cycles can do damage to the stumps, and since they’re located in Colorado, this is a major issue.

Currently, they’ve hooked up a weather machine to one of the stumps to measure humidity, wind, and temperature. And, it takes photographs. The University of Pennsylvania will use the data to determine how to preserve the exposed stumps for the future.

Excavations at the Monument

As mentioned previously, excavations occur only every few years. Part of the reason is that excavations are intensive, and dictated by the research pursued at the moment.

Researchers measure off a site for excavation down to the millimeter and carefully unearth the fossils. Tools, like razor blades, are used to split the shale. Paleontologists must be careful because the layers can be as thin as a piece of paper.

The tiny fossils are wrapped in a baseball-sized wad of toilet paper to be brought back to the research facility.

The History of Tourism at Florissant Fossil Beds

In the late 1800s, people visit Florissant to harvest the fossils. Two competing businesses own about half the petrified stumps each and must compete for visitors.

The two businesses end up in a feud:
One business tries to sabotage one tour operator by putting nails on the road to deter people from visiting their competitor.
An employee from the other business shoots someone on the other person’s land. Apparently, the petrified wood stump business was competitive!

For the 1893 World’s Fair in Chicago, they attempted to use wood saws to carve up the stump to take to the fair. This was unsuccessful because petrified wood is more akin to rock than wood. Today, you can see the broken off saw blades in the Big Stump.

Another story: one of the businesses becomes a dude ranch. A photo of bankers from Chicago dressed as cowboys can be found. The tourists in the 1920s and 30s would hunt for fossils and rope cattle on their vacation.

Yet another strange story: in 1956 a man in a limousine pulls up to Florissant Fossil Beds and wants to purchase a stump. While it was common to purchase pieces of petrified wood stumps, it’s unheard of to purchase a whole one. The visitor was Walt Disney, and he purchased the stump for his wife as a gift. Today, you can see the stump in Disneyland’s Frontierland in California.

In Florissant, people could purchase land from the government for a cheap price, as long as they improved it. The 1878 homestead of Adeline Hornbek is preserved at the monument.

Adeline’s story is quite unique: From Massachusetts, she moves to Oklahoma and meets her first husband. They move to Denver, and her first husband dies shortly thereafter. She marries again, and the two live in the city.

Her home in Denver is flooded, and she moves south to Colorado Springs where her second husband disappears.

As a single mom, she starts a homestead in Florissant. Her home is one of the largest homesteads in the valley. She raises her tween kids, is on the school board, and works at the local store. Her story details overcoming adversity and the opportunity for women to own land at a time it was uncommon.

Who Discovered the Fossils?

The hunters and gatherers in the valley discovered them. Several tribes in the area date back 5-6000 years ago.

When they came through the valley, they would’ve seen petrified wood. In the 1870s, science comes and records the discovery of the fossils, but the natives were the first to discover them.

How Did Florissant Fossil Beds Become a Monument?

The fossil beds became a Monument through a landmark environmental law case.

In the 1960s, developers bought land on what is now Florissant Fossil Beds. Additionally, there are the two commercial operations.

A grassroots effort springs up to protect the fossils. Dr. Estella Leopold, a geologist, forms a group called the Defenders of Florissant. They hire Victor Yannacone jr, who ends up being a founder of environmental law in the country. (The environmental movement got its start in the 1960s).

They go to court with the support of other conservation organizations and try to defend that even though it is Private Land, for the good of the people it should be set aside as a National Monument. A bill was moving through Congress to get the Monument designation in 1969, and the bulldozers were on the land when the bill passed last minute.

People who owned the land were paid to move off the land as it was now protected by the government.

What Is The Importance of Small Parks like Florissant Fossil Beds National Monument?

The parks were set aside because the American people deemed them to be significant enough to be set aside. It’s one of the richest fossil deposits in the world and is no doubt important.

The small parks tell the history of our country, what we learn, what we struggle with and what we value. And, teach us lessons for the future.

Jeff is grateful every day that he works in such a beautiful place. He knows that underneath the valley there’s an amazing story. There’s so much at the Fossil Beds beyond what you see.

He tells his staff their goal is to get the visitors asking “What’s here?” to leave saying “WOW!”

He lives with his family nearby and considers it a great place to live. Unsure about the position at first, he asked his family, “Do I even like fossils?” Others said that Florissant was too small. Sixteen years later, Jeff is still there.

Both the health of the world and being part of something bigger is important to Jeff. “The good spreads!” If you do good, others will take it with them and do the same.

Songs for the Junior Ranger

Ranger Jeff also wrote two albums of educational songs to help kids connect to the National Parks. He plays guitar, uses the songs to educate and get kids active!

Currently, Florissant Fossil Beds isn’t taking individual volunteers, but if you are part of a large group that would like to donate their time, Ranger Jeff would be glad to hear from you. You can reach Jeff at (719) 748 – 3253 x 202