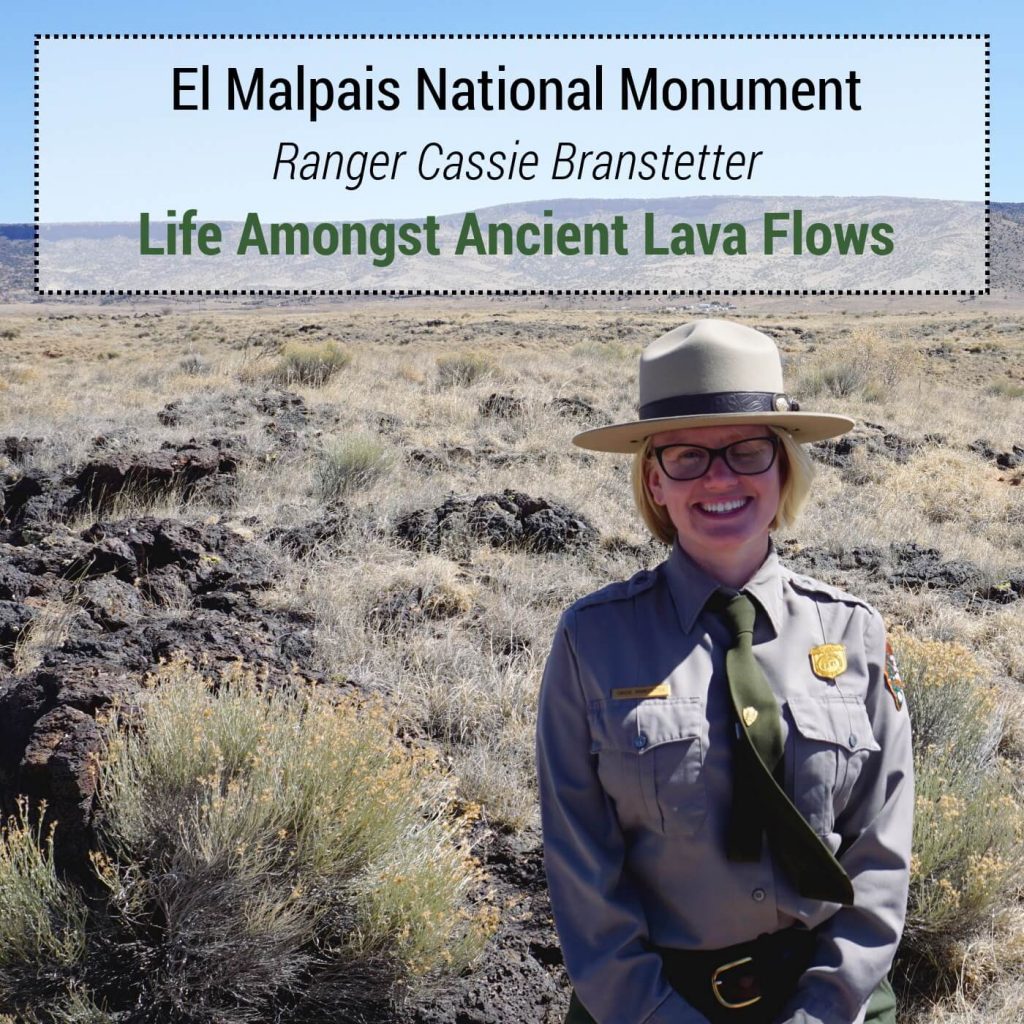 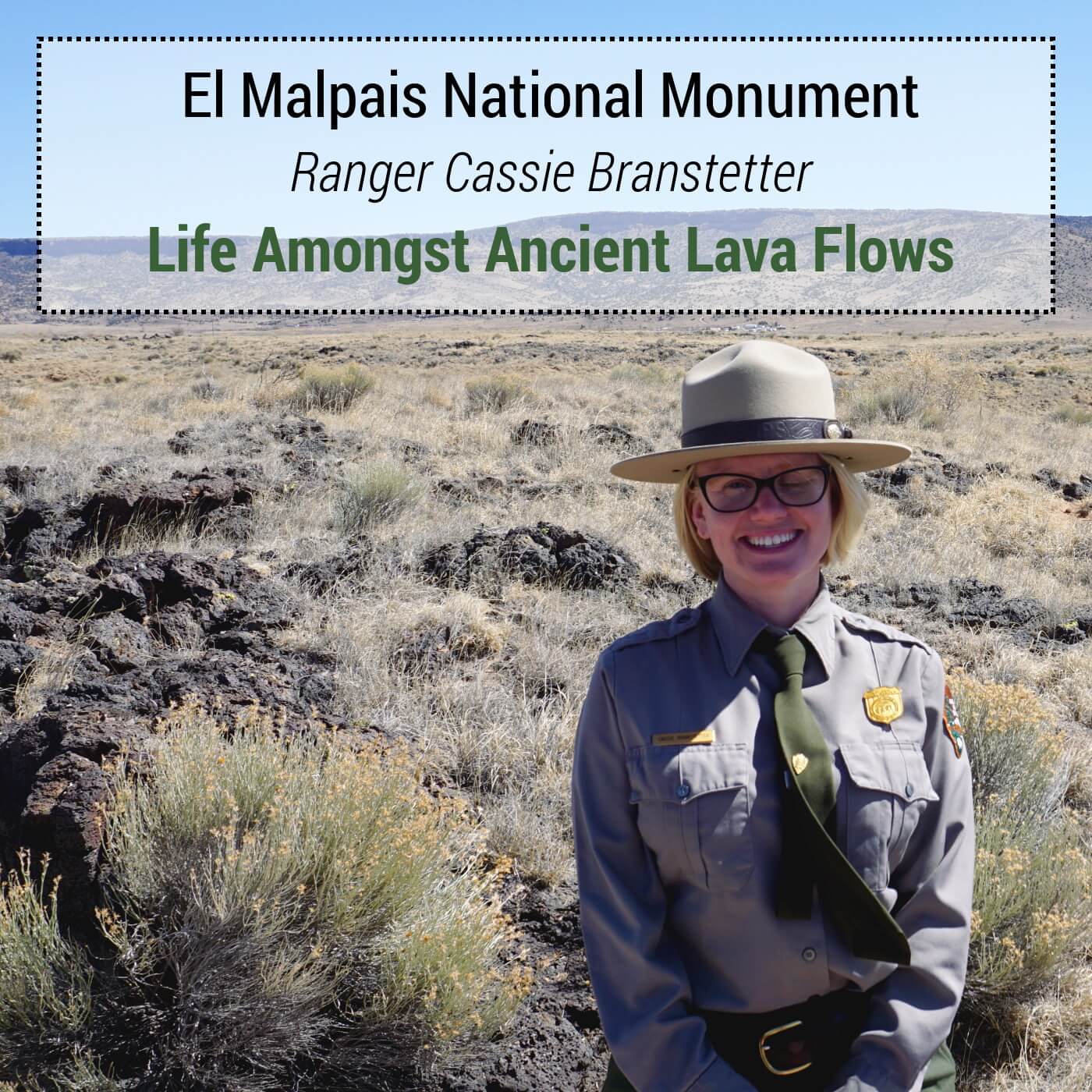 Ancient lava flows compose a major part of a dramatic and barren landscape at El Malpais National Monument, located in the New Mexico desert just west of Albuquerque. Let’s talk lava flows, lava tubes and geology with Ranger Cassie Branstetter. Life flourishes unexpectedly in this environment, as it adapts to find a way to survive.

Cassie is the Lead Interpretive Ranger at El Malpais National Monument. Over the past 8 years, she’s worked at 10 different parks, including El Malpais for 6 months.

Cassie graduated college with a degree in anthropology and sociology. She became a park ranger through the Student Conservation Association. Her career started at Hovenweep NM and found the ideals of the park service matched her own: the mission of the NPS, teamwork, and appreciation of the natural beauty.

The Spanish first arrived in the area with goods and cattle, expecting to cross the lava flow to quickly get to their final destination. However, they found it difficult to transport goods and cattle over the uneven surface of the lava rock. Thus, they named the area El Malpais, “The Badlands,” because it’s a bad land to traverse.

However, Native Americans in the area traveled over and transported goods across the lava rock long before the Spanish arrived.

El Malpais is a diverse landscape: sandstone bluffs, old lava flows, and a sandstone arch. It’s a high desert plain full of junipers, sages and desert brush. Douglas fir and ponderosa pine are found in little pockets of soil on the lava flow. The combination of the hard lava rock and green life creates a stunning environment.

El Malpais is located on the edge of the Colorado Plateau on a thin part of the Earth’s crust. The thin crust allows magma to easily come up to the surface.

The volcanic activity in El Malpais bears similarities to others in NW New Mexico and NE Arizona. The activity started about 700,000 years ago. However, the visible lava flows are approx 60,000 – 3,900 years old. Older lava rock has been covered by newer lava flows.

In the El Malpais area, none of the volcanic locations are active today.

The lava flow and features in El Malpais National Monument are like those currently produced in Hawaii. We can see how formations are made in Hawaii and compare that to the old flows in El Malpais to figure out how the features were created.

One of the primary features at El Malpais is the lava tubes. The top section of the lava hardens first due to the cooler air. This hardened section makes a crust, but the lava below the crust is still flowing into other areas. This can eventually create a tube once the lava below the surface leaves the area, but the top crust remains.

There are approximately 200 lava tube caves in El Malpais NM, and 5 are open to the public. Explorers can obtain a permit as long as they have the proper gear:

An additional rule of thumb is to go caving with 3 people. If one person is injured, one person can get help while the other stays with the injured individual.

Were people living in the area during the eruptions? We don’t know. There are archaic sites and ancestral Puebloan sites. However, they seem to be from after the lava flow.

There are other places in the National Park System where people were living in the area during lava flows. For example, at Sunset Crater National Monument in Flagstaff, AZ, there’s evidence of offerings made on the lava flows by people. Those flows are 1000 years old, making them younger than those found in El Malpais.

The Zuni and Acoma Pueblo lived never lived on the lava rock, but they did travel across it. On the Zuni-Acoma trail in El Malpais National Monument, you can see historic cairns built by the Puebloan People. The cairns were used to mark a trail across the lava flow.

Hiking shoes are known to be torn up on lava flow trails, but native peoples crossed the flows with yucca sandals. It’s astonishing they continued to use the trails for a very long period of time.

Evidence of frequently visited caches where belongings or food were kept is on the lava flows. Also, kipukas, areas where the lava flowed around the land naturally due to elevation or other factors, are a place where people may have stayed or cached items.

Water freezes and collects in the lava tubes, and people were known to chip off the ice or catch the water from the ice melt to drink.

How Does Plant Life Grow on the Lava Rock?

Lava flows are easily 20-30 feet deep in areas, but plant life grows directly on top of the formations. The soil is necessary for the plant life to grow, and is created on the rock a couple different ways:

Additionally, water catches amongst the rocks, and in combination with the soil, life can grow.

Unique Creatures Amongst the Lava Formations

Moss gardens at the entrance to lava tubes caves create a habitat of tiny creatures found nowhere else. Some of these moss gardens are possibly from the last ice age.

The entrance of caves in the park has a very specific temperature and moisture content, which allows the moss to only grow in that location. Endemic invertebrates are found in or near the entrance to the lava tube caves.

Other Life Found on the Lava Formations

You’ll find cacti and lichen in the area common to the desert. But, there’s life you might not expect amongst the lava flow is found. A motion sensor camera photographed a bear on the lava rock. The lava flow is harsh on animal paws, but some have adapted tougher paws to cross over the lava rock.

A recent lava flow is the McCarty’s lava flow from the McCarty’s crater. However, you won’t find the crater because it was used for target practice during World War 2. After WW2, bomb squads disabled any bombs found amongst the lava flow.

If you find anything that looks like a bomb in the lava field, don’t touch it, report it to a ranger.

Ranger Cassie leads night sky programs in the park. Once a month they coordinate a night sky event around the new moon when the sky is darkest. Programs take place at the Visitor Center and further in the park away from light pollution.

Much of El Malpais is remote, encompassing 114,000 acres. Deep into the monument, you can see the milky way. Like the stars in the sky, there are endless topics to be discussed.

The last night sky program they studied the colors of stars. Stars don’t all look the same but have different colors and variations.

They are pursuing a National Dark Sky designation.

Ranger Cassie On History of Earth and Humankind

We’ve evolved as a species to be around quiet, dark skies, and natural sounds. These things are difficult to find, but by going to see these natural atmospheres we get to experience what our ancestors lived on a day to day basis.

Taking a step back out of the technology we are surrounded by help take us into the history of the Earth and humankind.

Ranger Cassie on El Malpais and the NPS

There are many hidden gems in El Malpais NM. In this one park, you can find a little bit of ice sparkling in the sun, a hidden pot shard that no one may have seen or touched before, and many other hidden treasures.

The NPS is so diverse and unique and represents the natural beauty and history of this nation. The mission of the Park System is to protect and preserve for future generations. Enjoyment of a park and protection sometimes conflict, but Cassie likes that balance.

Enjoyment of these protected places leads people to be stewards of the parks. Rangers are there to steward the landscapes, but the entire nation is a steward of our national park sites. 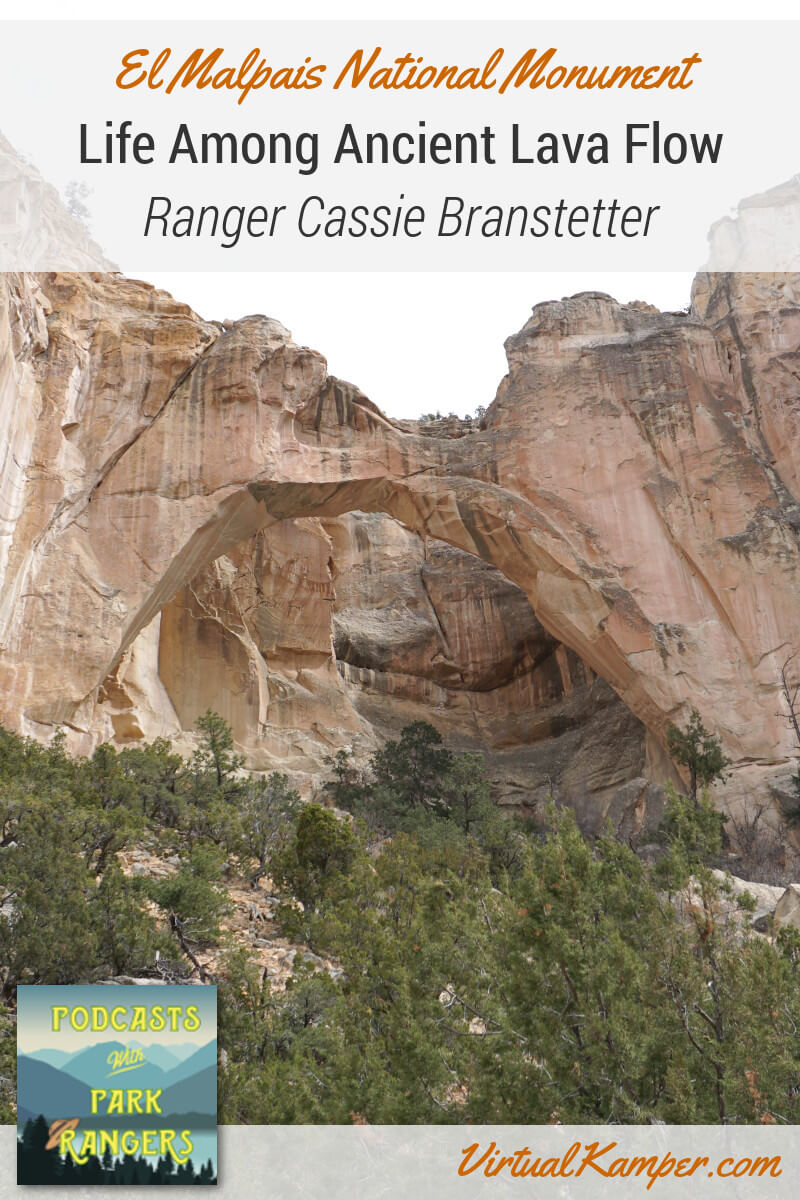 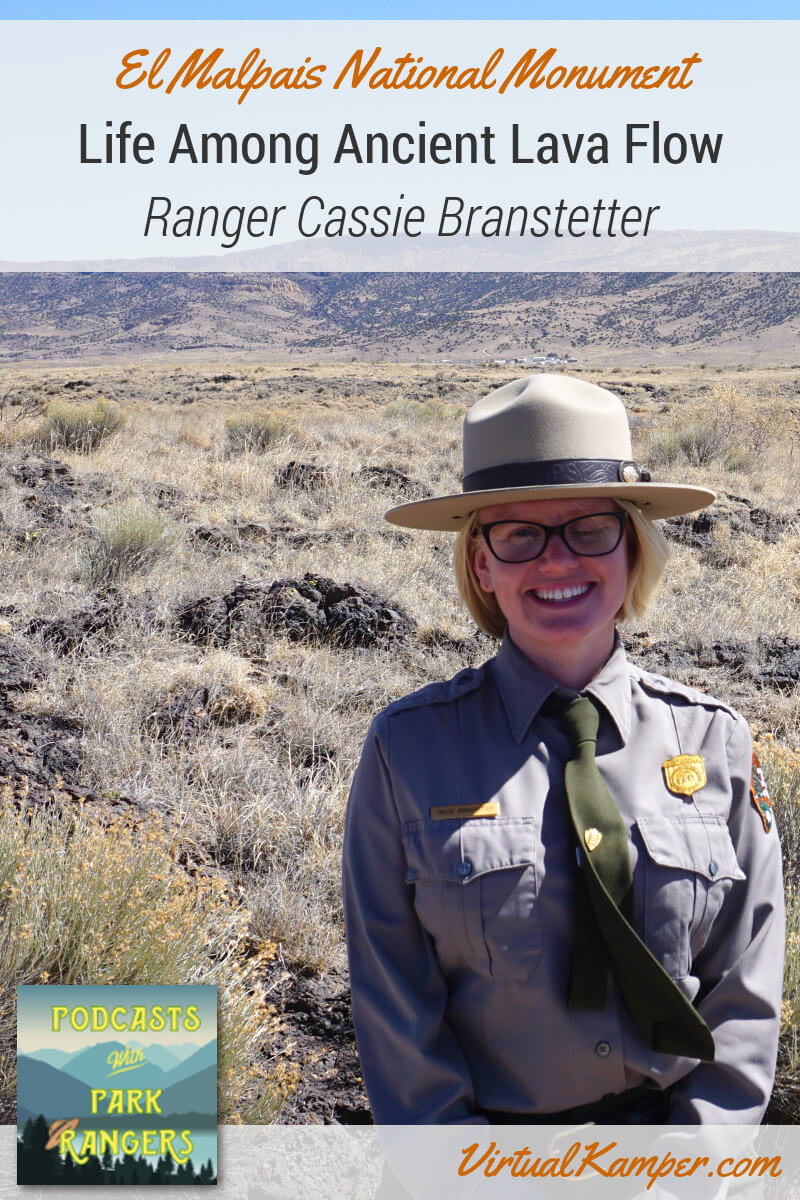