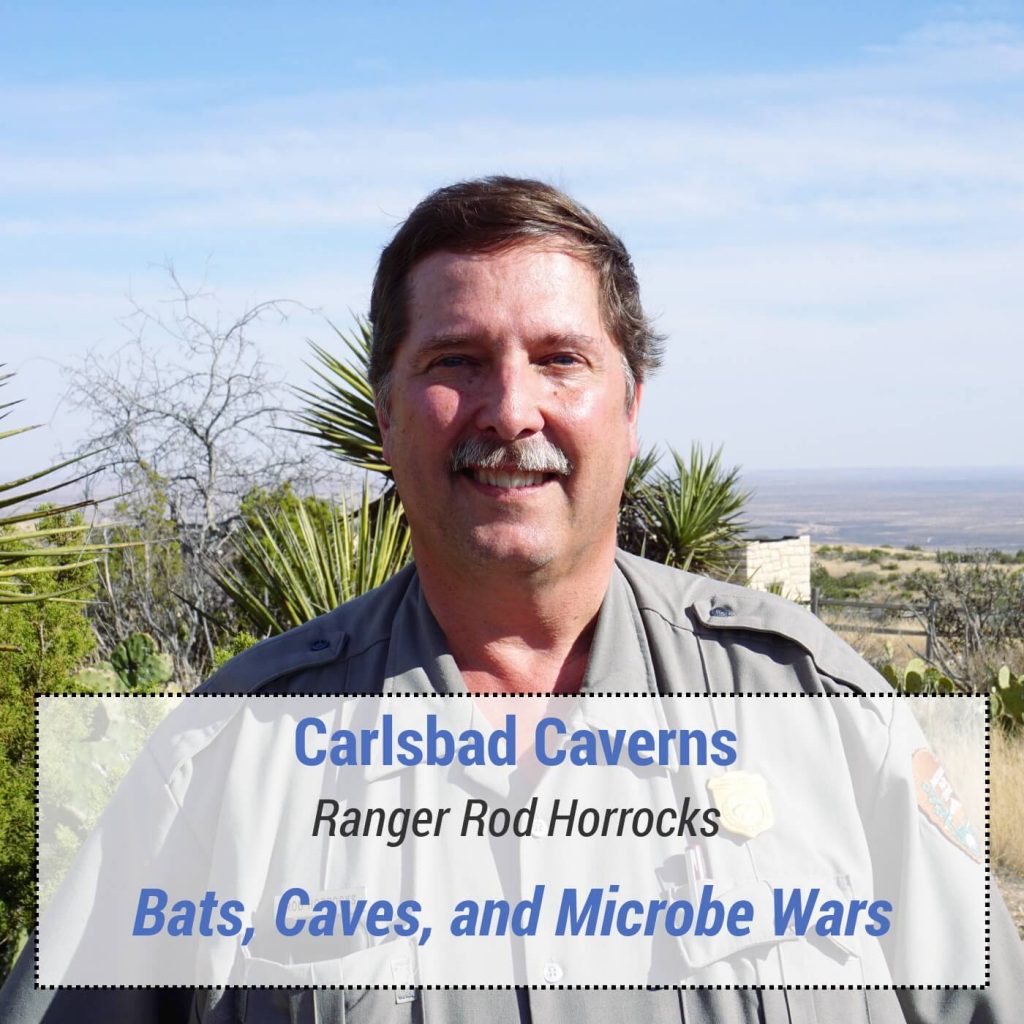 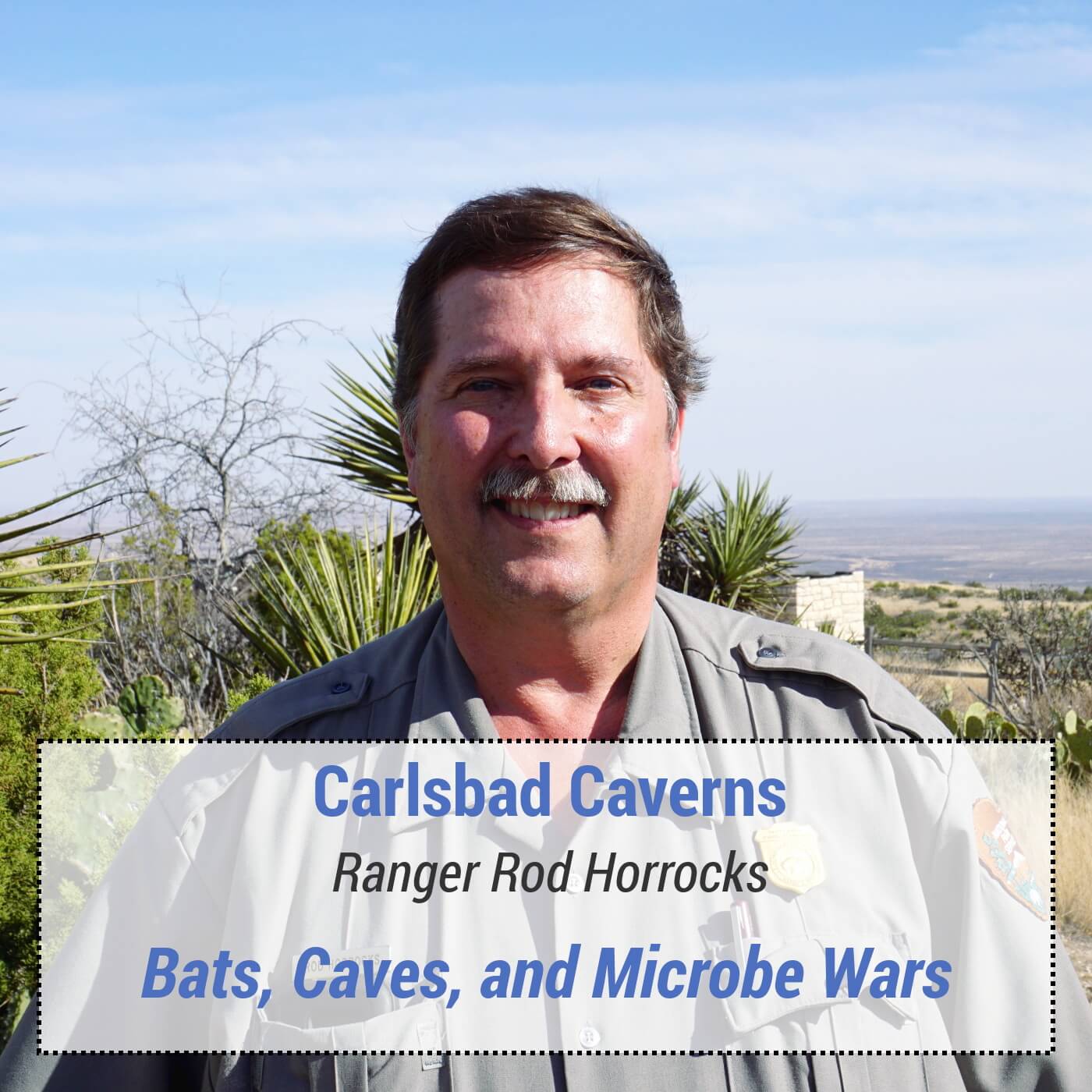 Let’s talk bats, microbes and cave maps! Rod Horrocks is a Physical Scientist and the Chief of Resources Stewardship and Science at Carlsbad Caverns National Park. He loves cave management, cave exploration, and cave mapping. This episode of Podcasts with Park Rangers gets into everything related to Carlsbad Caverns research!

Show Notes found at: https://www.virtualkamper.com/pwpr2/
Help keep the show on the road: http://www.patreon.com/virtualkamper/

At the age of 7, he fell in love with caves. His Dad didn’t let him go into a cave once and it piqued his curiosity enough to check cave books out from the library – since then he’s been hooked.

He took a temporary job mapping Timpanogos Cave NM and made himself indispensable. The work paid off, and he became the park’s first cave specialist. He loves his job at National Parks: people are conservation-minded, he got to be at a National Park every day, AND he got to map caves — his self-proclaimed hobby!

What are Resource Rangers?

Carlsbad Caverns has a variety of resources: Biological, Archeological, Physical, and Cultural. There are archaeologists, biologists and cave technicians employed at the park who all work together to manage the park resources. They monitor resources to ensure nothing changes and restore resources impacted by harmful activities.

Human interaction with the park can cause issues: the NPS wants people to come and enjoy the parks but must balance that with efforts to reduce the potential human impact on park resources.

The Brazilian free-tail bats are the primary bat found in the park. Additionally, there are 14 different species in the park — of which only a handful live in Carlsbad Caverns cave. Others roost in backcountry caves.

For instance, the Fringed Myotis maternity site – where it raises its young – is a couple miles into Carlsbad Caverns. It’s the warmest place in the cave, and over 1 ¾ miles deeper than the Brazilian free-tail roost near the mouth of the cave.

To count the bats they use computers and infrared photography to count heat signatures in a photograph. Estimates before computers used to be in the millions – but with more accurate techniques they put the bat population at ½ million.

Called the worst wildlife disease to ever hit America, a fungus called White Nose Syndrome has spread from the Northeastern US to within 200 miles of Carlsbad Caverns. A colony hit with WNS can lose 95-99% of its population, and 6-7 million bats died so far.

When WNS hit America, scientists didn’t know a lot about bat habits. WNS has caused an increase in bat research to determine their habits both locally and during migrations. It’s been determined WNS only effects bats in hibernation.

Scientists at Carlsbad Caverns research bats to see if they carry any microbes which are resistant to or could kill WNS.

During evening bat flights, bats leave Carlsbad Caverns in a mass exodus to search for food. They swirl out counterclockwise out of the mouth of the cave. Before dawn, they return one at a time. The bats fold their wings and dive into the cave, which makes a fun whooshing noise.

If you’re in the Carlsbad Caverns amphitheater before dawn, they whoosh past you on their return. The bats are expected at the caverns from mid-April to the end of October.

Since its discovery in 1986, researchers have flocked to Lechuguilla Cave. Cavers thought it was shallow, but after feeling the wind through some of the rubble, they gained permission from the Park Service to dig deeper into Lechuguilla.

They discovered the 5th longest cave in the world and the deepest limestone cave in the country. After its discovery, they installed airlocks to keep the caves ecosystem stable.

People sometimes spend the night in Lechuguilla Cave. To reach the first room of the cave, it requires 44 rope drops — the longest measured at 189 feet! Because of the effort required, people often spend 6-8 days underground for research.

Low impact camping techniques are employed so as not to harm the cave. Food must be cooked over tarps so no crumbs affect the microbes in the cave – which could create artificial blooms.

NASA, in its search for extremophiles in abnormal environments, has an interest in Lechuguilla Cave. The microbes in the cave are different from any other place in the world. They eat manganese, sulfur, rocks and each other to survive!

After millennia of war with each other, they’ve evolved beyond other microbes from normal Earth environments. Dr. Hazel Barton submitted the microbes to test their reaction to antibiotics, only to discover they’re immune to all natural antibiotics we’ve discovered!

One hundred years of tourism has made research at Carlsbad Caverns less desirable; scientists prefer Lechuguilla because it’s been cut off from the rest of the world for thousands of years.

People shed skin cells, hair, and lint as they walk through Carlsbad Caverns. Lint accumulates in the cave, much like that found in the back of your dryer. To preserve the formations, the lint must be cleaned up.

Last year, they cleaned up 44 lbs of lint from one tour route alone. Lint curbs 18” high on tour routes catch 80% of the lint, and volunteers clean up the rest: HEPA vacs or paint brushes with a static charge are dabbed on the formations to pick up the lint without damage.

You can use a compass underground, along with traditional handheld instruments to establish curves and distances in the caves. Laser rangefinders get the distance, and they check a compass direction and other instruments for inclination.

They draw a plan view (from top), profile view (from the side), and cross sections along certain passages. Researchers enter data into a computer program which will digitally create the cave map.

Ranger Rod’s Love of Carlsbad Caverns and the NPS

Every time he explores the caves he finds something new he hasn’t seen before. All the world’s top speleologists do research in Carlsbad Caverns National Park. They continue to start new projects, continue ongoing projects, and still debate the mysteries of the ones we haven’t figured out yet.

For Rod, the NPS preserves America’s treasures: natural, cultural, and recreational. Involvement in conservation is important to him. If it were only about preservation, everything would be closed up and the public would be sent home. Conservation offers different challenges but leaves these places open for the public to enjoy.

If you or a group are interested in lint clean up at Carlsbad Caverns, contact the Visitor Center for more information. 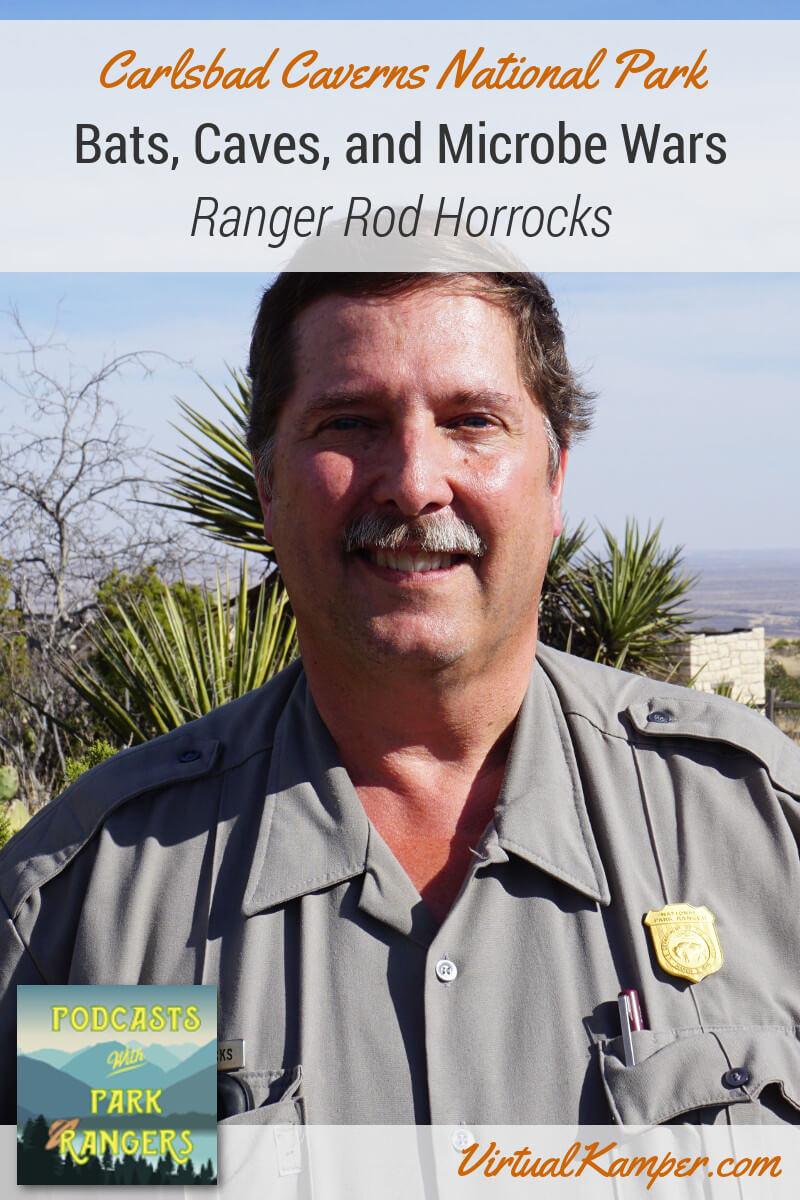 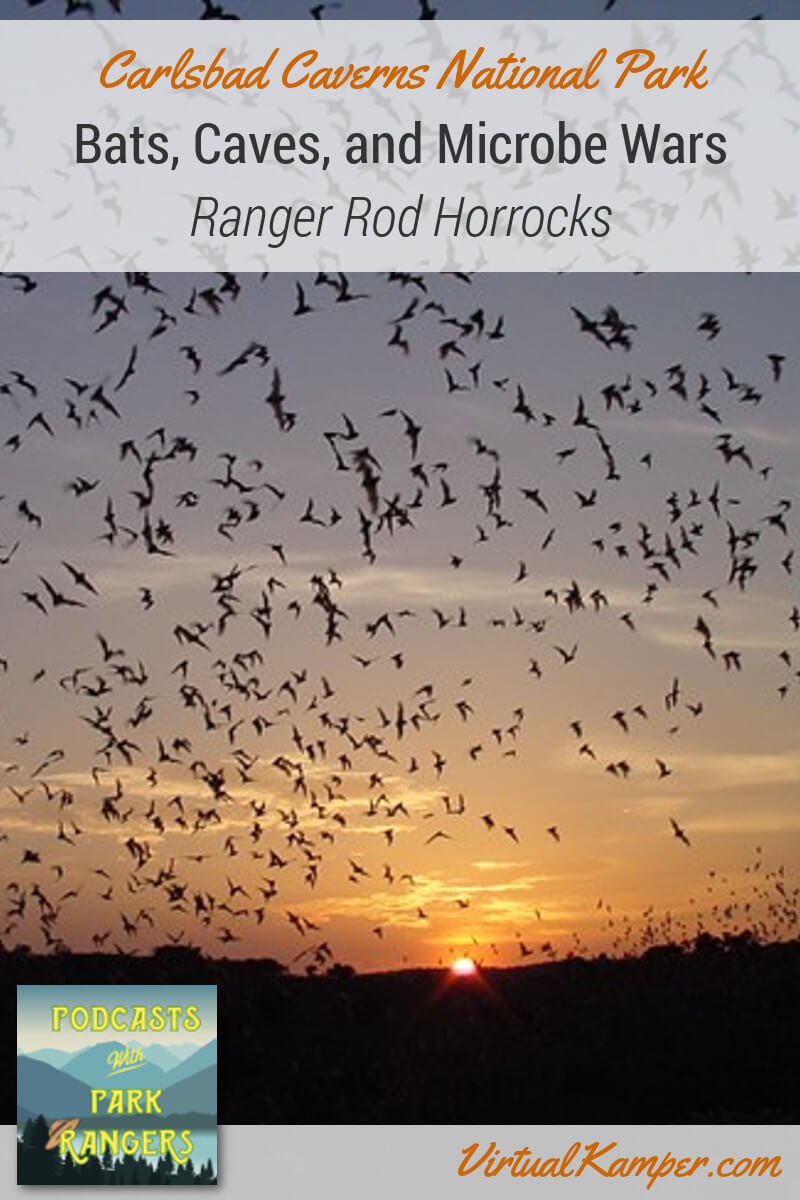