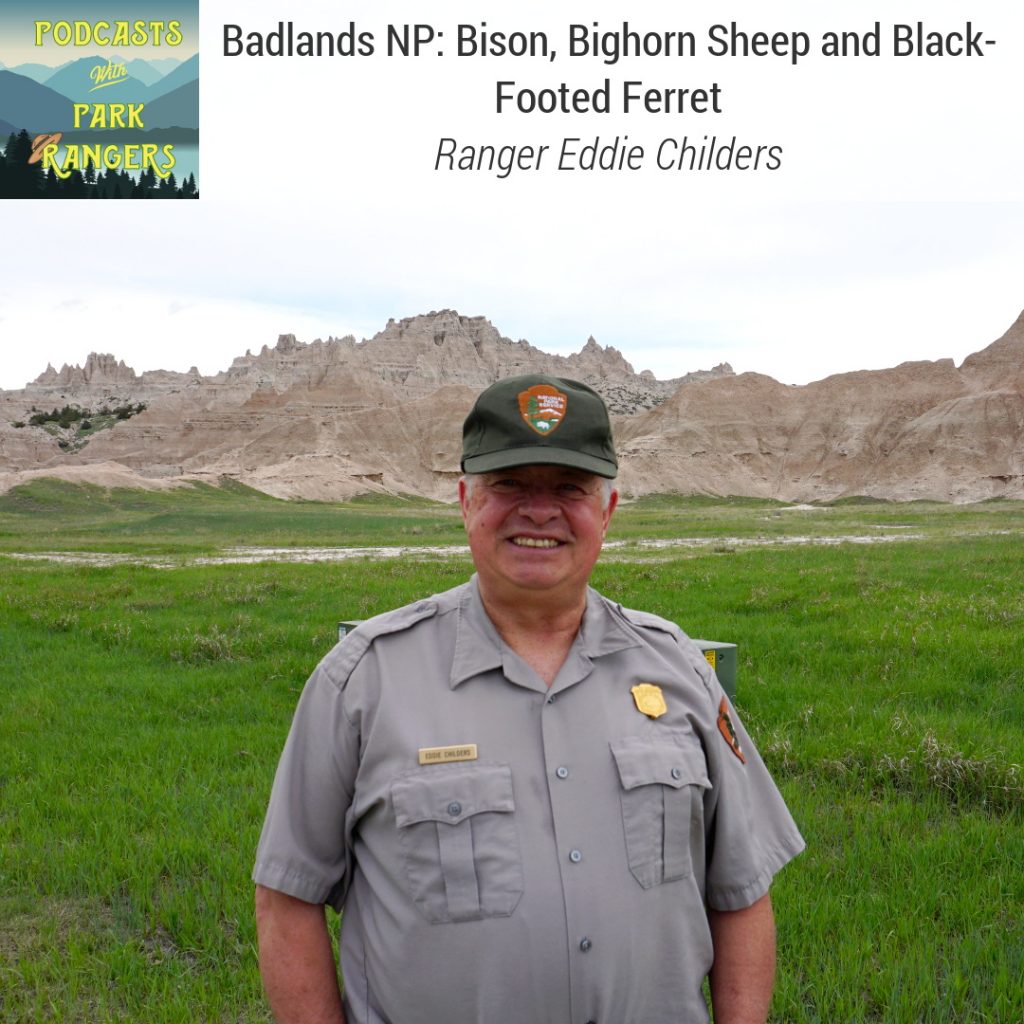 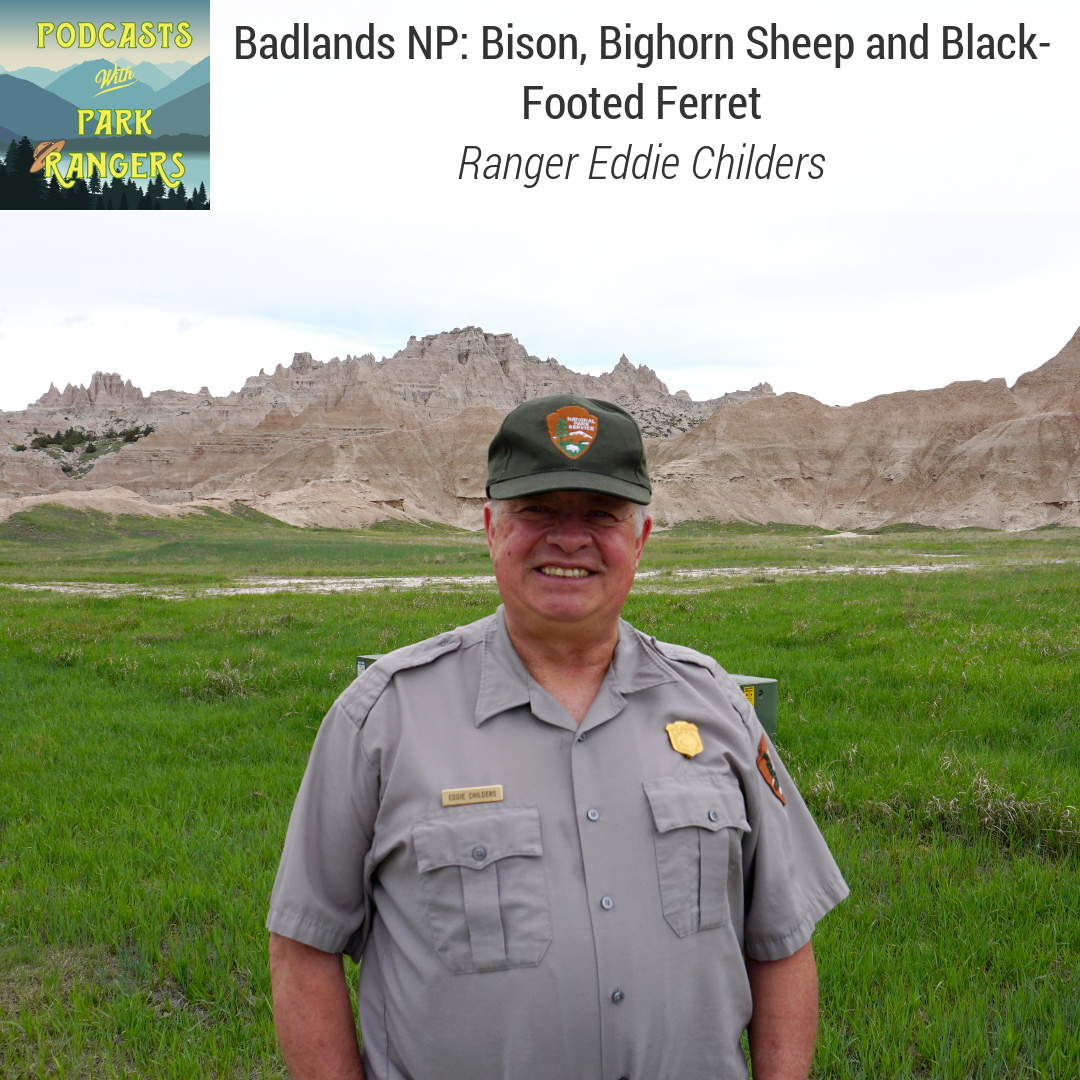 Badlands National Park wildlife is in a class of its own. Bison, bighorn sheep and the endangered black-footed ferret draw people from all over the world to visit the park. On this episode of Podcasts with Park Rangers, we speak with a wildlife biologist to take a peek into what it takes to manage the animal population. It’s a lot more than we could ever imagine!

Ranger Eddie loves to hunt, fish and hike. From a young age he tried to figure out how to weave his hobbies into a career, and being a park ranger was the perfect fit.

He’s been a wildlife biologist with the Park Service for 28 years and specifically at the Badlands since 1999. In addition to working with the Park Service, he’s also worked in the Soil Conservation Service and the Fish and Wildlife Service using a Masters Degree in Biology.

What Do Park Biologists Do?

Ranger Eddie oversees all the Badlands National Park wildlife and vegetation ecology programs. And, he’s the NEPA (National Environmental Policy Act) and Wilderness Coordinator — coordinating the legal side of any projects in the park to ensure they align with federal guidelines.

The job is quite broad and includes dealing with several animals:

Badlands National Park competed for funding in the 2016 Centennial Challenge Project. Using private funds from National Park Foundation, World Wildlife Foundation and the Defenders of Wildlife, they will open the North Unit of the park to allow the bison more room to roam.

They’re currently fencing 43 miles of the park boundary to open 23,000 acres for the bison to graze on. Soon, bison will roam the park much like they do at Yellowstone.

During the wet season the park can maintain a herd of about 1000, but during dry seasons it has been difficult and they would need to shuttle bison to other parks.

To keep the bison healthy, population geneticists recommend 1000 bison in a herd to maintain good genetic heterozygosity. Thus, why it’s good to have a large bison herd year round.

Redistributing Bison When the Population Is Too Large

Many other parks don’t have herds close to that size and are working with parks like the Badlands to shuttle bison around to keep healthy populations.

Additionally, bison are distributed to Native American tribes using the Intertribal Buffalo Council. Over the past 30 years, they’ve sent 5000 bison to 27 tribes in the USA for them to start their own bison herds.

Bighorn Sheep in the Badlands

One of the other major Badlands National Park wildlife species is the bighorn sheep. In the mid-60s to the 80s, 13 bighorn sheep roamed free in the park. And it wasn’t until the 90s they began collaring and monitoring the sheep. The population was quite small growing only to about 20 sheep because they hit a genetic bottleneck – meaning they didn’t have enough genetic diversity. However, they eventually moved past the bottleneck in the late 90s.

The population grew but were hit by a strain of Pasteurella which killed some of the sheep. They separated the sheep into smaller populations and distributed them across Badlands National Park. If one group died from disease, none of the others would be affected.

In 2004, the Canon Corporation gave the park some funding to bring 23 new sheep from New Mexico up to the Badlands. The population is now doing well, and they are distributing sheep to other parks as well.

To continue monitoring the sheep, they put monitors in the birth canal of pregnant ewes. So, when the babies are born they know right away and can go collar them for monitoring. This also allows them to follow the progress of lambs born into the herds.

The park plans to work with other entities in South Dakota to manage their bighorn sheep herds as one metapopulation.

The new herd has been exposed to Pasteurella, but they aren’t shedding the disease like bighorn sheep in other areas do upon exposure. This could be they have better genetics from two different lineages: the early group from Colorado and the one from New Mexico.

In some parts of the west, the disease is decimating herds, but for some reason, the Badlands population seems somewhat resistant.

The current theory is there are some females who are resistant but are still shedding the disease. These ewes, aka super shedders, transmit the disease via sneezing or fecal matter.

As mentioned before, the black-footed ferret is the most endangered mammal in North America, and the Badlands has the largest population of ferrets on the continent. Originally, they thought the ferrets were extinct in the late 70s.

In Meeteetse, WY a farmer’s dog brought him a dead critter. It wasn’t until his wife said they should take the animal to a taxidermist they found out it was a black-footed ferret. They brought the ferrets to Fort Collins, CO for captive breeding to increase the population and re-release them to the wild.

However, the fleas are becoming resistant to the deltamethrin. The park is looking for new ways to treat the plague. Other types of insecticide and oral vaccines are used for the prairie dogs. They also vaccinate the ferrets against the plague as well.

Why Manage the Animal Populations?

Some species, like the black-footed ferret, require intensive management in order to ensure they survive the next 100-200 years for future generations.

People love to see wild animals, and the park tries to manage them as little as possible. They let nature take its course when things happen.

Keeping the Badlands National Park wildlife as natural as they can is important, and some intervention of population management is necessary to preserve the animal populations for future park visitors. And, it speaks to the mission of the National Park Service.

The bird population in Badlands National Park is diverse and surprises many bird enthusiasts. Long-billed curlews, the American avocet, waterfowl, bald eagles, golden eagles, and other grassland bird species. It really is a bird watchers paradise.

The park does survey the birds to make sure their populations are stable but don’t do much management of the species beyond that. Some of the grassland bird species are declining, so they are aware they might need to do something to help manage the population.

There are also reptiles, fish, bees, and butterflies.

Ranger Eddie’s Love for the Badlands and the NPS

Eddie loves the landscapes of the Badlands and enjoys photographing the landscape. The shadows and colors of the formations can look different due to the time of day and the direction of the sun. Additionally, the Badlands National Park wildlife species are a major draw.

He wants to make a contribution to the American people and work towards something that’s bigger than himself for future generations. To have a place where people can go that are wild and free for future American to enjoy

All of our public lands are in search of volunteers. Whether it’s with the Bureau of Land Management, the US Forest Service or the National Park Service which includes Badlands National Park, there’s probably a volunteer opportunity in your area. Find out more information by visiting Volunteer.gov