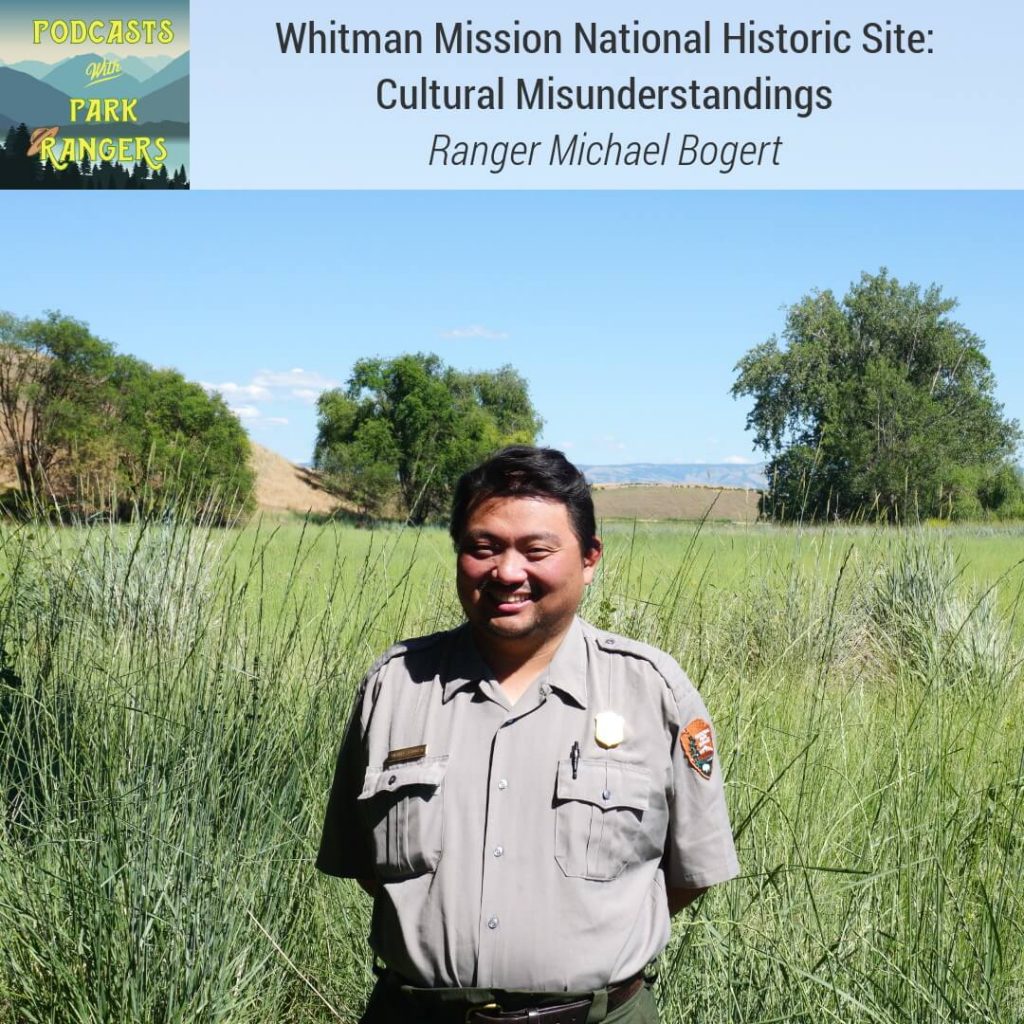 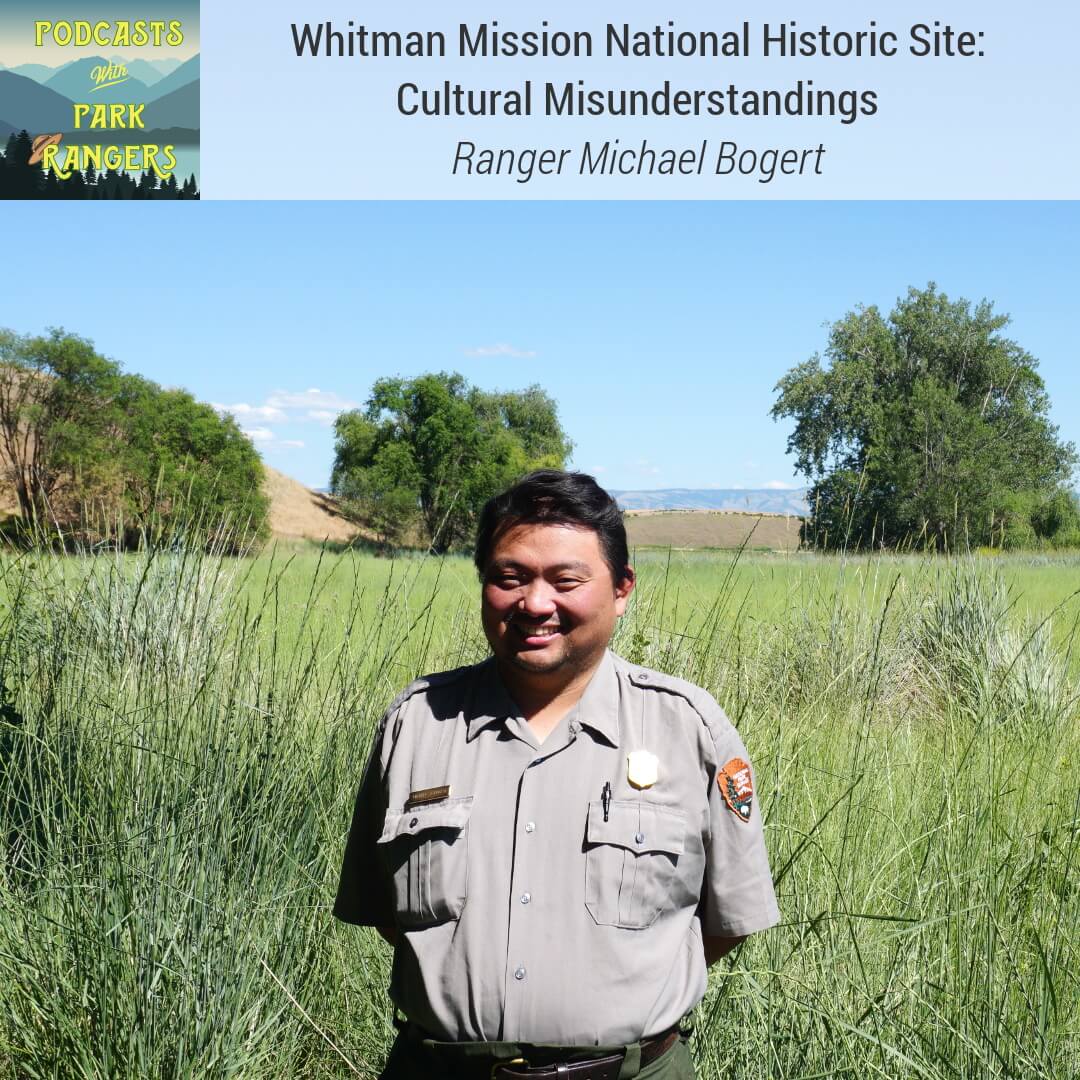 In the early 1800’s the US went through a revival of Christianity and people of faith signed up to minister to the Native American people in the west. Marcus and Narcissa Whitman leave their lives behind in New York to become one of the first families to travel the Oregon Trail. They preach to the Cayuse Tribe, and through a series of cultural misunderstandings, they become part of a national tragedy. On this episode of Podcasts with Park Rangers we explore Whitman Mission National Historic Site.

Ranger Michael has worked as a Seasonal Ranger with the National Park Service since 2012, and this summer he’s at Whitman Mission National Historic Site. The sites he’s worked range all the way from Yukon-Charley Rivers National Preserve in Alaska to the Statue of Liberty in New York.

Michael explores new places through hiking and he connects with locals to find out their stories about each site he works at. This connection helps him tell the story of each park in a unique way.

In the Walla Walla Valley of southeast Washington, north of the Oregon border, you’ll find Whitman Mission. The green hills surround the park and it’s mostly farm country today. The Walla Walla River runs nearby and it combines with mountain runoff to create a watershed.

The mission sits in a temperate area, and in the summers it can reach 100 degrees. While there are trees surrounding the area today, in the mid-1800’s there were none. So, it’d be a very hot place to call home with little to no shade, but it’s a great place to settle and farm.

Who are the Whitmans?

Marcus and Narcissa Whitman traveled across the country from New York to the area now known as Walla Walla, Washington. As missionaries, they spread the word of God to the Cayuse Nation. In the 1830s, America saw a revival of Christianity, and it wasn’t enough to be a good Christian. The church expected people to preach their faith as well.

Marcus left his life as a doctor, and the two rode in a covered wagon drawn by oxen along the Oregon Trail. In 1836, they began a new life out west without their families. On a journey like this, they never expected to see their family once again.

The trip sounds difficult, but their faith drove them. If they didn’t reach Washington and preach the word of God to the Cayuse Tribe, they’d be considered failures.

The Cayuse Tribe are receptive and welcoming to the Whitmans. Marcus and Narcissa weren’t perceived as aggressive, so they wanted to understand them. Eager to learn, the Cayuse attended their church.

Initially, they wanted to see if the Whitmans could teach them something new to use with their lifestyle. They’d seen fur traders with the Hudson Bay Company before, and those folks were helpful.

However, relations start to sour as Dr. Whitman insists the Cayuse need to begin farming. Their tribe is nomadic and they breed horses. So, when the Whitmans insist they need to be contained in one spot, they probably found it confusing!

This was only the beginning of rising tension between the Cayuse and the newcomers.

People begin to move west along the Oregon Trail. And, several decided to stay with the Whitmans as a respite during their journey to reach the Pacific.

What started as a trickle becomes a flood. The idea of new beginnings and the 1938 Gold Rush spurs westward expansion, and the Cayuse feel more and more invaded as time goes by.

Dr. Whitman sets up a blacksmith shop, and the Whitmans’ mission becomes a detour along the Oregon Trail. If people fell ill or needed a blacksmith shop along the way, they could journey 30 miles off of the main trail to find help with Marcus and Narcissa.

Relations Between the Whitmans and Cayuse Head South

A combination of issues come together to sour the Cayuse Tribe’s relationship with the Whitmans:

Eventually, some of the Cayuse ask the Whitmans to leave. They warn someone could get hurt if they don’t leave.

As the Cayuse people become sick and die, they become angry. One person, in particular, reaches his tipping point. Two of his children die from the measles, and he feels something must be done about it.

The Murder of the Whitmans

The Cayuse Tribe have a belief that if a medicine man practices bad medicine and kills your family, he can be killed himself. If the medicine man isn’t helping, it’s better to get rid of them.

On Nov 29th, 1847, five Cayuse people lead a raid to kill the Whitmans. Dr. Whitman is killed with a tomahawk to the back of the head. While Narcissa isn’t a doctor, she’s considered a nurse by many, so she was targeted as well. Eleven others are killed in the raid, including a couple children.

The Christian Revival is still going strong. So, when the news of Marcus and Narcissa’s deaths reach the east coast, the public seeks justice swiftly.

To have missionaries die while doing God’s work is an abomination to the general public. A group of 500 volunteers head west and put the five men who committed the attack to death.

One year later, the US creates the territory of Oregon. And, in an effort to create safer travel for new pioneers, the Cayuse are moved to a reservation. Even though only five committed the crime, many saw the creation of the reservation as justice for the Whitmans’ death.

In Walla Walla today, the Whitmans are revered and their settlement of the area is has a positive reception in the Oregon history books. For many years, the story at Whitman Mission National Historic Site left out the Cayuse perspective entirely.

The National Park Service now works with the Cayuse Tribe to present their side of the story. They work cooperatively with the NPS to ensure their point of view and culture are correctly represented.

The NPS works to give as neutral of a view as possible. It’s up to the visitor to decide who might be right or wrong.

What can we learn from Whitman Mission?

First, we must understand it was a different time when this tragedy occurred. With that in mind, how can we take what happened at Whitman Mission and ensure it never happens again?

Communication is the key to help us cooperate with other cultures. Many of the misunderstandings at Whitman Mission would have been avoided if the language barrier didn’t exist and they understood one another more clearly.

Ranger Michael’s Interest in Whitman Mission and the NPS

The NPS tries to keep a balanced story between both the Whitmans and the Cayuse Nation. While Ranger Michael enjoys working at Whitman Mission, the tale saddens him. Both sides didn’t want people to die, but it happened.

There’s no real group to blame in this story. And on a visit to Whitman Mission, people will hopefully see both perspectives and add it to their worldview for the future.

The National Park Service preserves our history, and it’s important to know where we came from. They preserve Both the celebrated and the difficult places because both have huge learning opportunities.

As a Ranger, Michael believes it’s his job to make you fall in love with America all over again and preserve what the founding fathers tried to create. He wants people to come together, enjoy themselves, and rediscover the idea of America.