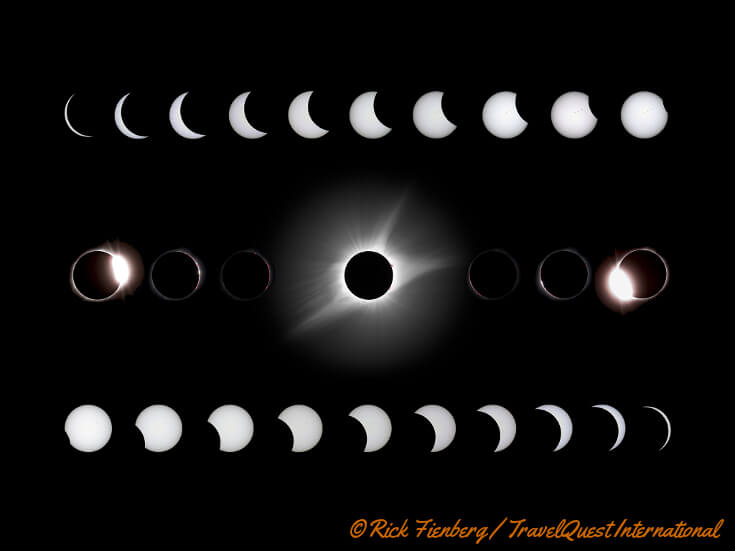 Describing a total solar eclipse in one word: awesome. And not the way many of us use the word colloquially — count me as guilty for overusing awesome — but in the true sense of the word: inspiring awe.

We traveled far to be in the path of totality for the total solar eclipse of 2017.

The experience of a total solar eclipse was a spectacle in and of itself, and well worth the adventure.

However, this was also the culmination of a journey Lucas and I talked about and planned for years. We started our own business, downsized our belongings, sold our house in Denver, and became full-time RVers. A new beginning — what better way to start with a once in a lifetime event.

In Gallatin, Tennessee, we camped in a beautiful campsite on the Cumberland River. It was quite a journey to experience 2 ½ minutes of totality — it’s 2 ½ minutes I’ll never forget.

The Road To Gallatin For The Solar Eclipse 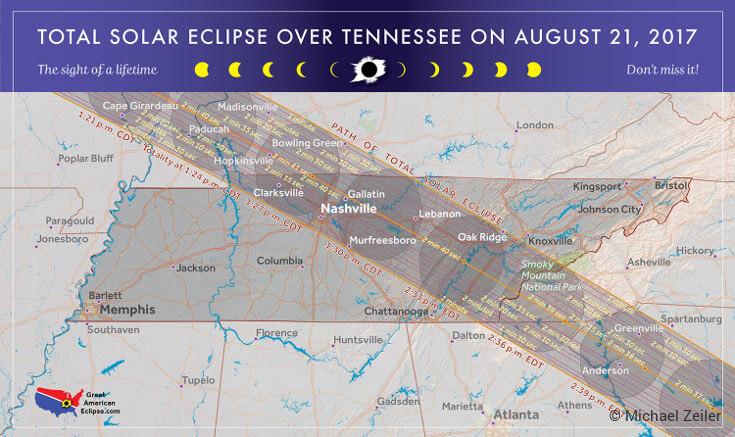 I planned on seeing this solar eclipse since May, 2012. Lucas and I were about to be married, and the dream of full-time RVing was still a couple years off. All I knew is that I desperately wanted to see the eclipse. We originally planned to see it in Grand Teton National Park, but that’s not quite how it panned out.

Somewhere along the line I came up with a crazy idea to buy an RV to live in full-time while touring this beautiful country we live in. Five years later, things were falling into place.

Early in 2017, I still hoped that we would get an RV and make it to Grand Teton in time. The house went on the market in April, and we temporarily relocated to Baton Rouge with Lucas’s mom.

However, obstacles started to pop up:

I was beginning to worry we might not get on the road in time to see the solar eclipse. 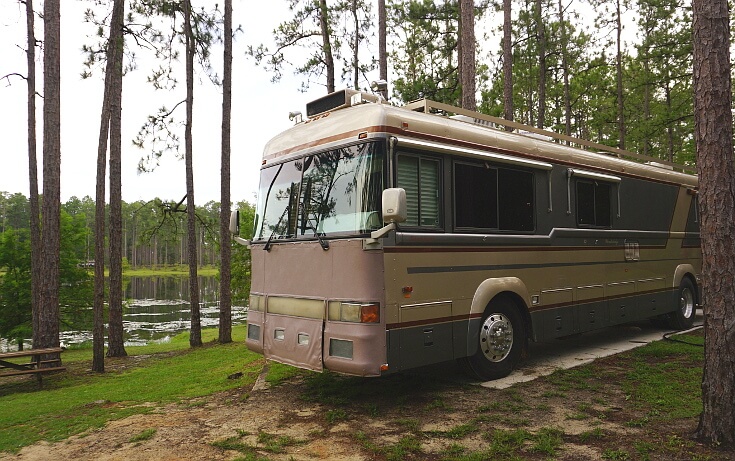 Luckily, it all worked out: our maiden voyage began on August 15th, 2017. Lucas, myself, and three cats… (Did I mention we are doing this with 3 cats? Yea… it’s crazy, but they like it so far).

We were fortunate enough to book a last minute campsite on the path of totality, just outside of Nashville, TN. Our first big journey as fulltime RVers was the Solar Eclipse. It was our new beginning to life on the road.

The day before the solar eclipse we pulled into Cages Bend Campground, and were greeted with the sound of bagpipes!?

Lucas and I looked at each other and it dawned on us that this was going to be a special experience. The whole campground was buzzing with excitement. Every single camper was there to see the galactic spectacle. 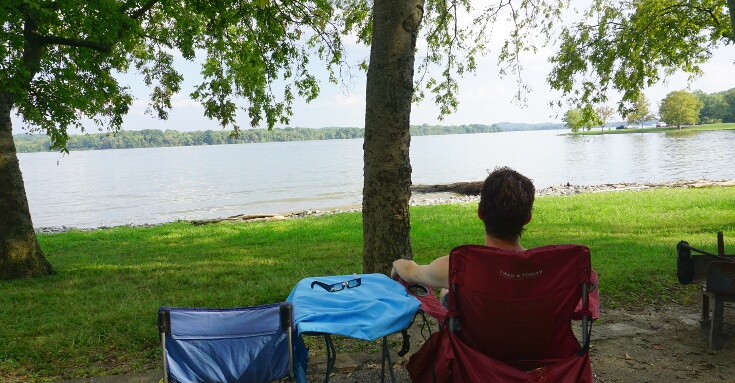 As a bonus, we had one of the best campsites in the campground (not bad for last minute reservations). We had a view of the Cumberland River where we could jump right in and swim!

We set up camp, and hoped for the cloudy forecast to clear up. According to the Weather Channel, we were in an iffy area for the eclipse…

First thing I did when I woke up was look at my phone to see if the weather gods would be good to us. I opened up my weather app, checked the hourly forecast, and it was all sun, sun, sun! I woke Lucas up while singing “It’s A Beautiful Day” by U2 as loud and out of tune as possible.

Lucas and the cats both agreed that this was not their prefered way to wake up in the morning.

I felt like the only person who was excited… so I made breakfast to get the day started.

At noon, the moon started to pass in front of the sun. You can’t see most of the eclipse with the naked eye due to… well… the sun. You can see it with eclipse glasses though, and luckily I had ordered a few of these ahead of time. 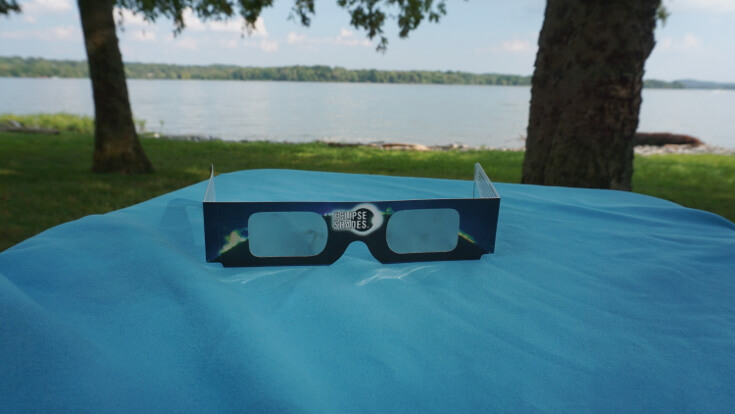 It would be an hour and a half before totality. Rather than twiddling our thumbs, we passed the time by making a pinhole-esque projector with a pair of binoculars.

For the next hour, we often glanced up to check on the progress of the moon. Several families passed our campsite to find a primo viewing location by the river shore. We chatted with some of the campers as they walked by, and you could feel the anticipation radiating from everyone. 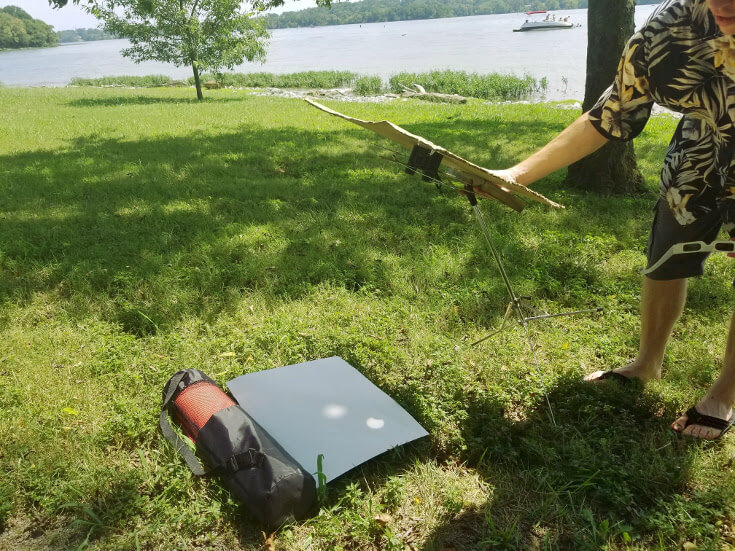 During preparations for what was to come (a.k.a. killing time) I looked down to notice something interesting on the ground: hundreds of mini eclipse shadows brought to us by the leaves overhead. Each gap of sunshine through the trees worked like a mini-pinhole projector. 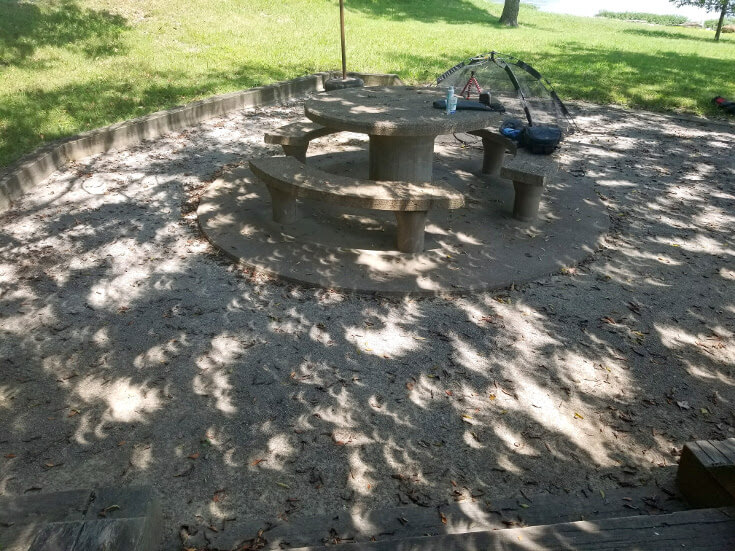 Judging from our new found leafy eclipse viewer, it was time to find a spot in the sun and prepare for totality.

We perched ourselves in camp chairs along the river, grabbed a couple drinks, our eclipse glasses, and observed.

As we watched the moon nearing closer to fully covering the sun, it became significantly cooler. I was working on my sunburn about 15 minutes before, but within a couple minutes of totality I could take off my sunglasses and add a layer of clothing.

We also noticed the light around us taking on an orange hue. The horizon looked like a 360 degree sunset. Our shadows sharpened, the daytime cicadas started to quiet, and crickets started to chirp… it was a surreal experience.

Looking up again, the sun began to disappear… we saw the diamond ring effect for one second, and then TOTALITY! 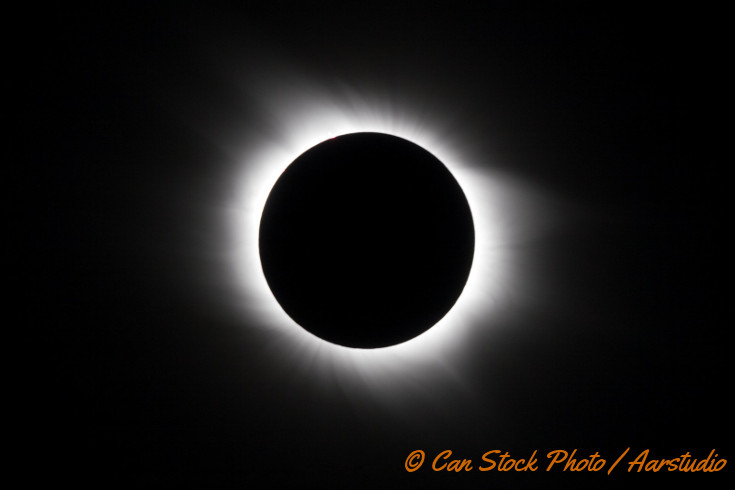 It was like being in a dream: it was dark enough that stars were out, the horizon was a dim orange all around, and someone across the river started shooting off fireworks. Everyone was whooping and hollering. The corona was awesome to look at.

Lucas and I held hands as we gazed upward at the eclipse; the experience moving me to tears.

Two and half minutes moved by in the blink of an eye. We saw the diamond ring effect again without eclipse glasses, just for a second. I really just wanted to see it for a second (and I survived though I had a spot on my vision for a few minutes). As the moon moved passed the sun, the sun’s bright rays beat down on us once more. 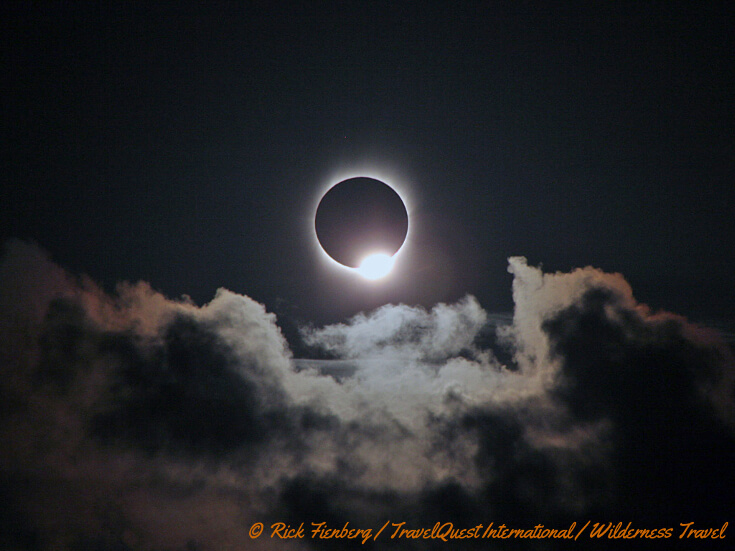 The light around us was still orange. The crickets quieted as the cicadas began their song.

I looked around at everyone on the river shore. My eye then ran across a couple we had met earlier. I wasn’t sure at first, but I realized he was down on one knee proposing to his girlfriend. Ugh, the tears started anew as I watched their special moment… what a story they would have to tell everyone!

The experience was so short. It really felt like a dream, but it will be burned into my memory forever.

The Solar Eclipse — After Totality

Lucas and I decided to walk the campground to see what other campers were up to during the last half of the eclipse. We happened upon a group of campers we spoke with earlier. They had a telescope, and we were invited to view the last bit of the eclipse through it. 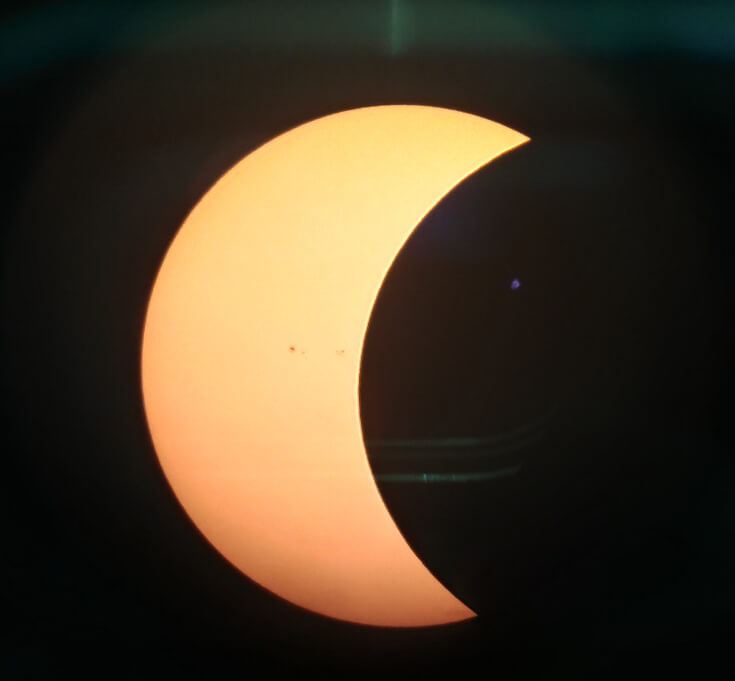 The owner of the telescope, Frank, was the same person who played bagpipes the day before. I thanked him for the performance and told him he was the reason we had clear skies!

While looking through the telescope, we took pictures of the eclipse with our phones pressed against the eyepiece. You could see sun spots as shown in the above photo (and I’ve heard in some telescope pictures you could see the International Space Station). 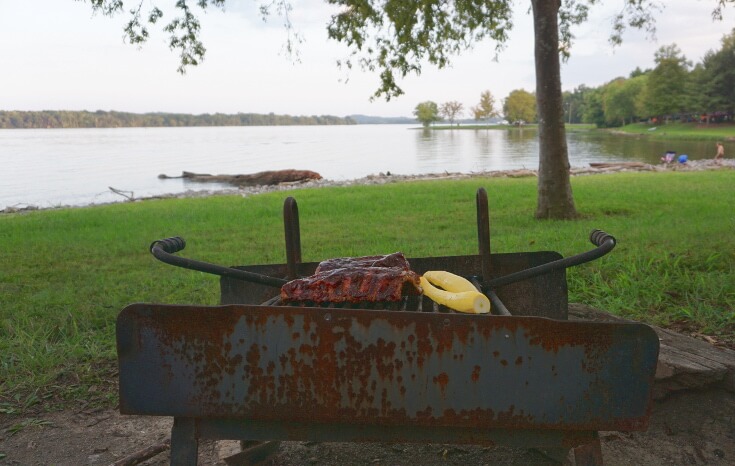 The day was finished with a swim in the river to escape the heat and a barbecue dinner of what I called “eclipse ribs”. We enjoyed what was left of the sunny day we were fortunate enough to have, and basked in the afterglow of the eclipse.

Now, we begin to think forward to our new RV lifestyle. We talked about it for ages — how we could go see special events at the drop of a hat, and it finally happened. 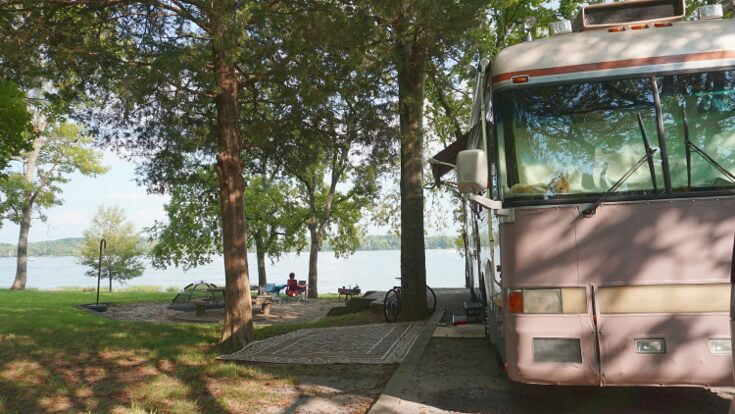 The freedom this life will afford us, and the excitement of an unknown future are what drove us to this lifestyle in the first place. We obviously have a lot of hurdles to overcome: RV maintenance on the road, ironing out our expenses, and getting our virtual businesses off the ground will take work! It’ll be worth it though — we’re only a few weeks in, and I’m happy with the choice so far.

As for the eclipse, I would love to see it happen again! The next eclipse is scheduled for 2024, which will go right over my dad’s house in Ohio. We’ve already started making plans… where will you be? 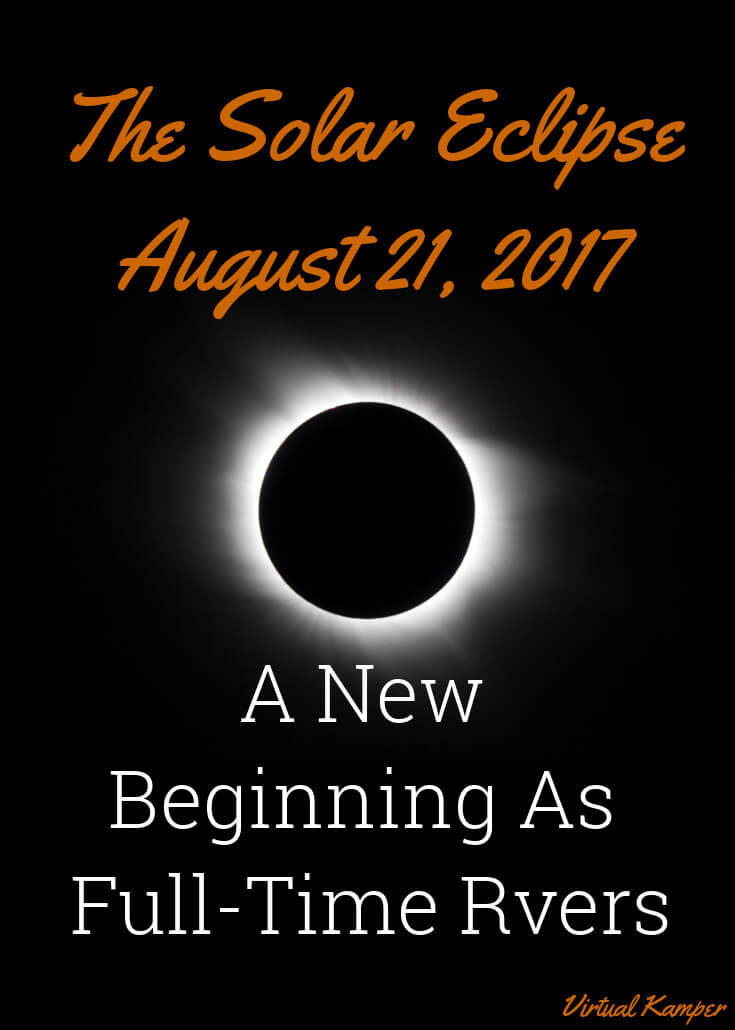