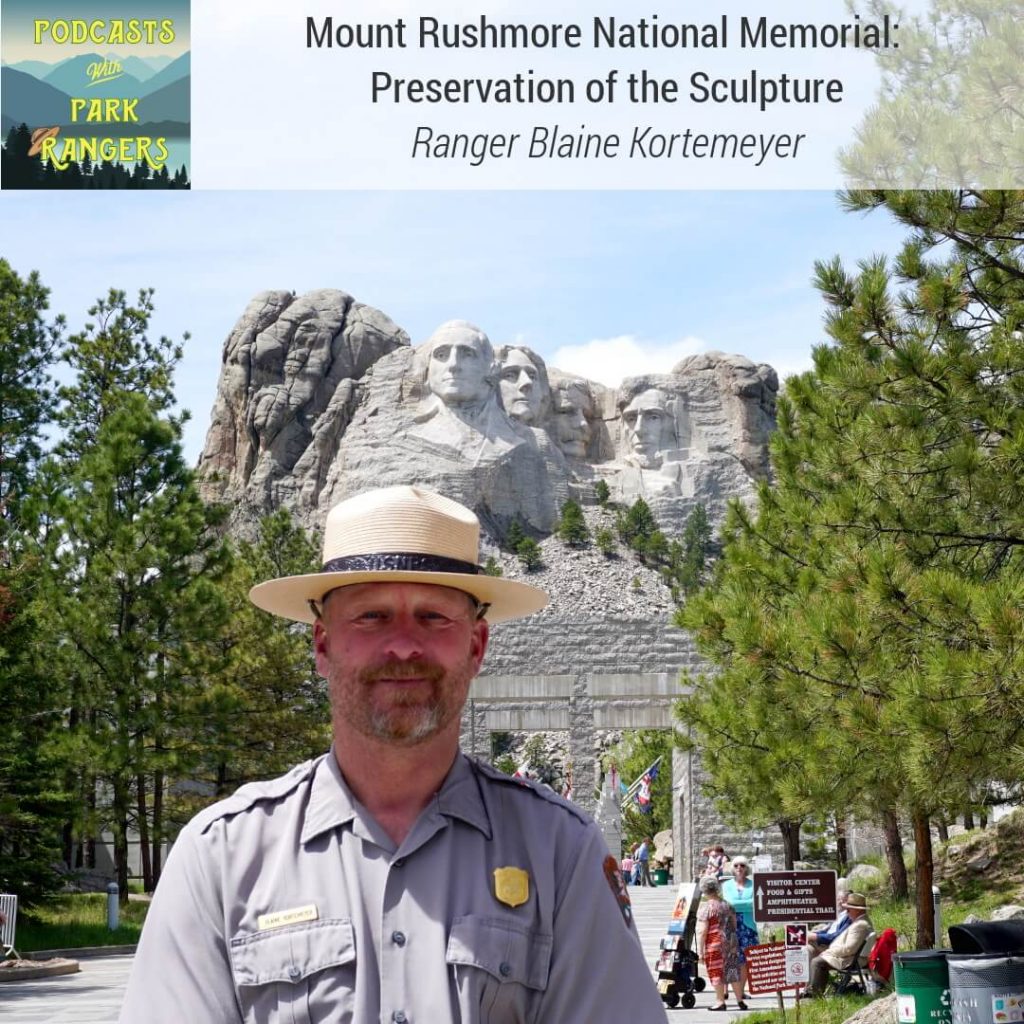 How does the National Park Service keep the presidents looking pristine? In this episode of Podcasts with Park Rangers we discuss Mount Rushmore preservation efforts with the Assistant Cheif of Interpretation, Blaine Kortemeyer. We learn about his unique role on the Rope Access team — a unique group of Rangers who see eye to eye with the presidents for the sake of maintenance.

Ranger Blaine is the Assistant Chief of Interpretation at Mount Rushmore National Memorial. He started as a seasonal ranger at various sites across the US and returned to his home in South Dakota to work at the sculpture in 2001.

He decided to become a park ranger to continue service to our country. After High School, he went into the Marine Corp, where he developed a sense of patriotism and service to his fellow citizens. So, becoming a park ranger after that seemed a logical step as he headed into college where he could continue that service today.

A team of Rangers from a variety of roles in the park work on the Rope Access Team to preserve Mount Rushmore. Everyone is required to be at least a level 2 rope access technician.

To achieve level 2, rope access technicians take a written, practical and an oral test on the intricacies of rope access work as well as compile 500 hours of experience.

Eye To Eye With The Presidents

Ranger Blaine describes being “eye to eye” with the presidents as both inspiring and scary. For many on his team, they don’t have a problem with the height. But, he says he’s struggled from time to time. However, once they begin work on the sculpture, a lot of the fears fade away as they focus on the task at hand.

From the very beginning, Mount Rushmore had several geological flaws the sculptor, Gutzon Borglum, worked around. Borglum adjusted each presidential face to ensure they used the most durable granite in the sculpture. However, those flaws still exist today.

In 1998, the NPS took several high def 2D images of the sculpture from various angles with markers placed on each face. These markers allowed them to piece together a 3D model of the sculpture on a computer to aid in Mount Rushmore preservation efforts.

The Park Service mapped out the cracks in the sculpture on the 3D model and discovered several of them intersected to form 22 individual rock blocks. Each block is numbered and begins with a letter: W for Washington, L for Lincoln and R for Roosevelt. Jefferson is not included in this system because there aren’t any flaws in the piece of granite he’s carved into that the NPS is concerned about.

Of all the individual rock blocks, only 4 are of major concern because they could move out of the sculpture. Fiber optic strain gauges are attached to each block to monitor any abnormal movement.

Currently, thermodynamics cause each block to move a small amount every day from the sun heating up the rock to cool down at night or from the weather. However, none of the cracks have changed in width, so everything is well with the memorial for now.

The granite itself is durable, eroding only 1 inch every 10,000 years. However, there are two kinds of cracks that concern the rope access team for Mount Rushmore preservation:

It’s similar to climbing because some of the same equipment is used. But in general, it’s a different technique. The team is on the rope at all times, and they are always anchored to the top of the sculpture.

A high line system allows the team to shuttle equipment from either the top of the sculpture down to workers or from the ground up in a unique manner.

Ascending and descending from anchors is pretty straightforward, but it gets a bit more challenging moving laterally. Often the team will throw a rope under a president’s nose to facilitate lateral movement across each president’s face.

The View Atop Mount Rushmore

Visitors are not allowed on top of the memorial, so we asked Ranger Blaine what the view is like.

After ascending the canyon behind the sculpture, Rangers can easily access the top of Washington’s and Jefferson’s head. However, Lincoln and Roosevelt are a bit more difficult to access because Rangers must go through a crack to get over to those faces.

The heads are rounded out, and they can’t see the faces all that well from the top. The views of the landscape are similar to that found at the parking structure — a view across the plains of South Dakota. So, visitors get nearly the same perspective the Preservation Team has on top of the Memorial from a much safer location.

Vegetation on the Sculpture

Sometimes the preservation team needs to weed and pull vegetation out of the cracks of the memorial. In fact, a good crop of raspberries is found at the top of the mountain.

Lichen is an issue on the sculpture and has been since it was finished in 1941. In 2005, the rope access team power washed the sculpture in one of their first major projects.

A German company called Karcher donates a large power cleaning to a place in need every year, and in the spring of 2005, they cleaned Mount Rushmore for the very first time. They don’t anticipate needing to do so again for several decades because lichen takes a very long time to grow.

In 2009, CyArk laser scanned the sculpture to create a subcentimeter accurate 3D rendering of sculpture. The scan is used as an interpretive medium online, and they can map the cracks to a better degree for Mount Rushmore preservation.

Public schools in the area also worked with the NPS to create lesson plans to apply math and geometry concepts to the 3D map of the sculpture. The curriculum follows kids from Kindergarten to 12th grade.

You can see the 3D rendering on the CyArk website, and you can go to the top of the mountain as well as the Hall of Records virtually from home!

Ranger Blaine’s Love For Mount Rushmore and the NPS

For Blaine, Mount Rushmore is home. The power of the memorial can change people’s lives if they’re open to a broader experience of their emotions. It can make them a better human being, and that resonates with Ranger Blaine in his life.

Helping people connect to Rushmore on a meaningful level has helped him grow as a human being. Mount Rushmore can change people, just as many places in the Park Service can change people if their open and receptive to the lessons that place has to offer.

All of our public lands are in search of volunteers. Whether it’s with the Bureau of Land Management, the US Forest Service or the National Park Service which includes Mount Rushmore National Memorial, there’s probably a volunteer opportunity in your area. Find out more information by visiting Volunteer.gov