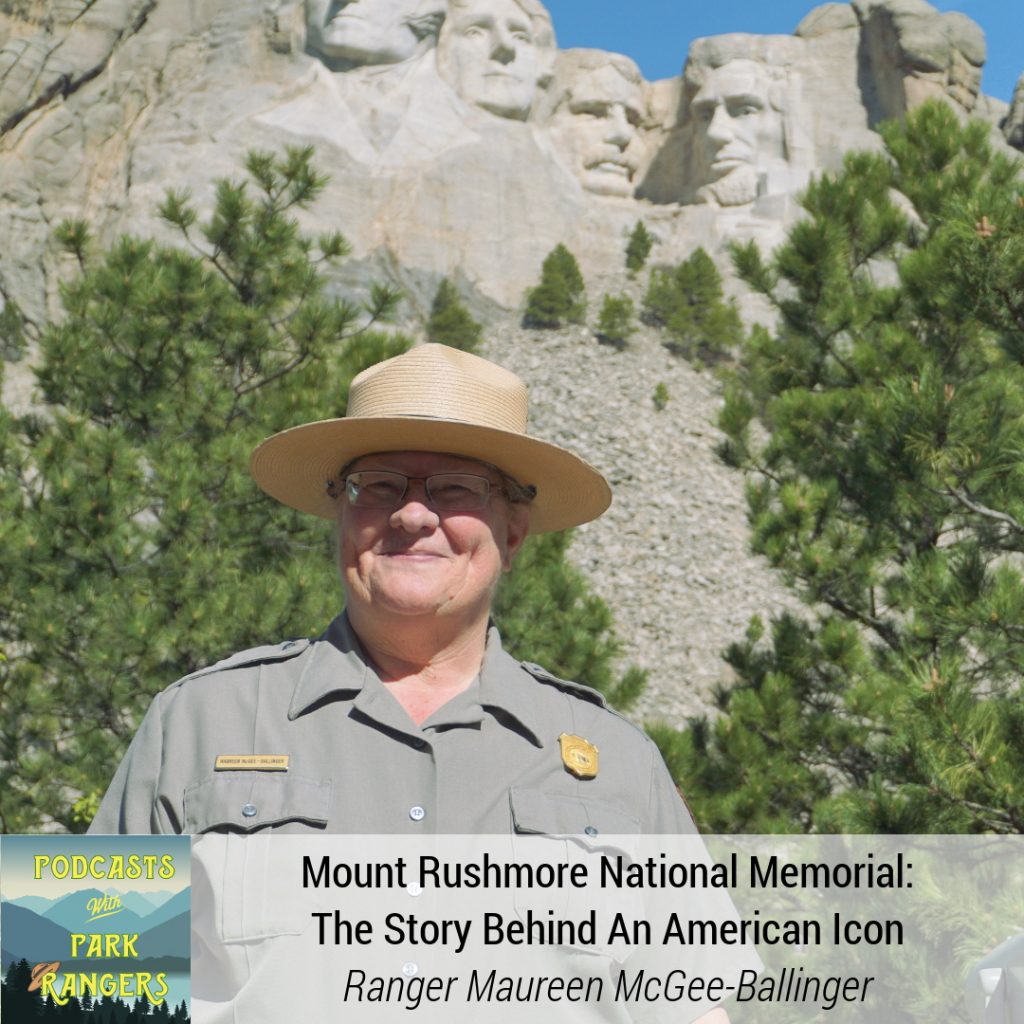 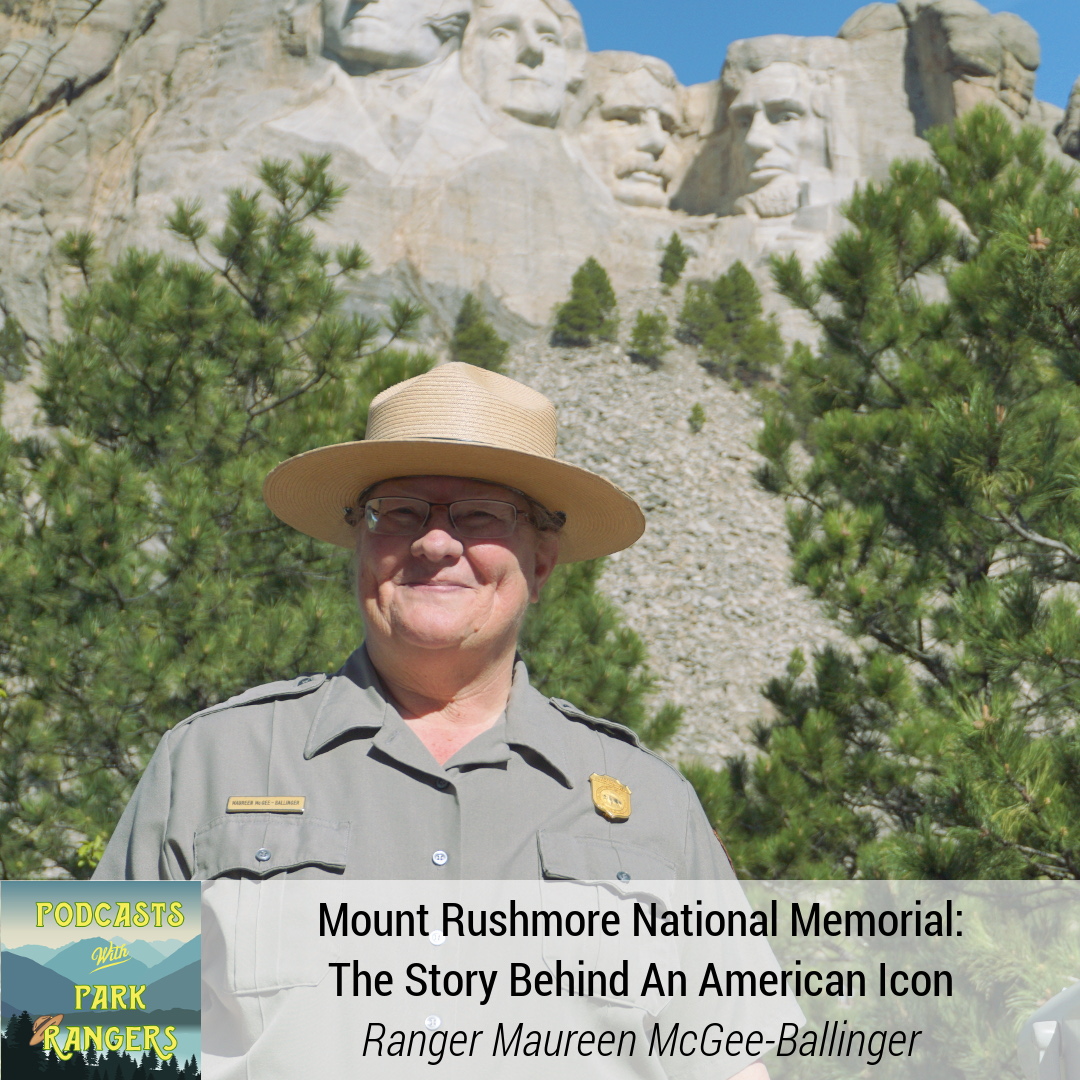 Have you ever wondered how four presidential faces end up carved into the side of a mountain in the Black Hills of South Dakota? In this episode of Podcasts with Park Rangers, we learn about the complex and controversial story of the American icon — Mount Rushmore National Memorial.

Ranger Maureen is the Chief of Interpretation at Mount Rushmore National Memorial. She’s been with the NPS since 1988, and prior to that, she worked at Yellowstone as a park concession worker.

She’s from a suburb of St. Louis and wasn’t exposed to the National Parks much while growing up. However, she saw Old Faithful in National Geographic and said to herself she wanted to go there one day.

That one day came after college. Maureen wanted to save up for a law degree and decided working at Yellowstone in concession would help her save for her goals. However, she stuck around the park for 7 years, and eventually became a Park Ranger.

Since then she’s worked all over the US — from Mt. Rainier to the Everglades. And for the past 6 ½ years, she’s worked at Mount Rushmore.

About Mount Rushmore National Memorial and the Black Hills

After crossing the prairie of the Midwest, you’ll begin to see the Black Hills of South Dakota. The land is considered sacred by many tribes and holds a lot of cultural significance long before Euro-Americans ever moved west.

Today, as people travel through the Black Hills and the town of Keystone, they’ll round a final bend in the road and see the presidents faces on Mount Rushmore carved into beautiful Harney Peak Granite.

The sculpture attracts over 3 million visitors a year! And, if you watch people enter the park, you’ll see how they’re drawn to the memorial from the moment they step foot in the park.

The Presidents Weren’t the Original Idea

Doane Robinson, the state historian of South Dakota, wanted to attract visitors to his state. So, he came up with the idea to find an artist to carve great western folk heroes into the spires of what’s now the Needles Highway in Custer State Park.

He chose Gutzon Borglum, and when Borglum traveled to the state and inspected the granite of the Needles he said the stone was no good for sculpting. The artist traveled all over the Black Hills and eventually found Mount Rushmore — the name of the mountain predates the sculpture.

Additionally, Borglum convinced Doane he needed to think bigger than Great American Western heroes and to choose Americans everyone would know. And that’s how they came up for the idea of the presidents.

Just How Big Is Mount Rushmore?

The heads on the monument are 6 stories high, and if carved in total the presidents would be 462 feet tall! The original idea was a ¾ height carving, but today you only see the faces.

Underneath the sculpture is mica schists — an uncarvable metamorphic rock. And because of this, they carved only the presidential faces.

The original model for the monument is in the sculptor’s studio at Mount Rushmore National Memorial, and visitors can see the model today.

Why Those Four Presidents?

On the modern monument, you see George Washington, Thomas Jefferson, Abraham Lincoln, and Theodore Roosevelt. But, why these presidents?

Originally they decided upon only these three. Jefferson would be to the left of Washington and Lincoln to the right. And to the right of the three presidents — an entablature in the shape of the Louisiana purchase with the past 150 years of American history engraved into it.

However, as work progressed, they found the granite to the left of Washington uncarvable. In order to save the project, they had to move Jefferson to the right of Washington and move Lincoln over to the location of the entablature.

This created a gap, and Borglum decided to add a fourth president: Theodore Roosevelt.

Teddy Roosevelt hadn’t died all that long ago. In fact, several people still alive knew him personally. However, Borglum wanted him on the monument because he stood up for the common man. The trustbuster!

Additionally, Borglum knew Roosevelt personally and worked on his campaign when he ran for president.

Today, it seems an obvious choice! He plays a big role in the National Park mission and set aside places like Yellowstone for the future enjoyment of the American people. But, at the time they carved the sculpture, he wasn’t as well known for those accomplishments.

Before carving even began, people found the sculpture controversial. Some thought it was a neat idea to help promote South Dakota tourism, and others wondered who would foot the bill for such a monumental piece of art?

Originally, Doane Robinson thought the memorial could be paid for through donations, and they’d use very little state money. However, as Borglum began the project, he knew it would take more than donations alone. That’s about when the federal government became involved with funding.

In addition to funding concerns, conservationists protested the project. The Black Hills are sacred to the native tribes of South Dakota, and many wanted to preserve a natural landscape. Local journalist Cora Johnson of Rapid City wrote many articles about preservation and saw the memorial as a desecration of nature.

Even today, the controversy still exists, especially for local tribes in the area.

How Did They Carve Mount Rushmore?

To begin with, Borglum drew his concept on paper and created a model out of clay. Then, he created a bigger model 1/12 the size of Mount Rushmore National Memorial today.

To scale the model to full size, they used a pointing system. They placed a disc with numbers on top of the model and a metal rod placed on top of the disc rotates like a dial to those numbers. From the end of the pole hung a long string with a plumb bob at the end of it.

Three measurements could be extracted from this system:

They multiplied the measurements by 12 which correlated to the scale of the sculpture itself and carved into the rock via a large scale pointing system 12 times the size on the memorial.

Gutzon Borglum didn’t carve Mount Rushmore alone. He hired miners from Keystone who searched the Black Hills for gold because they knew how to work dynamite.

Borglum instructed the miners how deep to blast, and they did so with impeccable precision such that they completed 90% of the carving with blasting dynamite.

Over 400 workers created Mount Rushmore over the 14 years it took to create the sculpture. A typical day found Borglum painting instructions on the cliff face. Miners walked up 700 steps from the bottom of the mountain to clock in at the top, and that’s when their pay started for the day.

The workers scaled down the cliff face in a bosun chair, where they drilled holes and placed dynamite into the rock face. At lunch, they blasted the rock. And after lunch, they repeated the same process once again.

As the memorial took shape, they carved the last 5-6 inches using a technique called honeycombing. Workers drilled holes close together to remove smaller pieces of stone, and they completed the finishing work with a chisel. Borglum brought artists from the East to do the fine work.

Two artists in particular: Chief Carver Luigi Del Bianco and Hugo Villa aided in the finishing work of the President’s faces to give it the finished look of today.

Gutzon Borglum’s initial ideas were grand. He wanted to carve the entablature of the Louisiana purchase, which of course they dismissed after they discovered other issues with the granite. But, he had other ideas as well.

Borglum envisioned the Hall of Records. Behind the president’s faces, there’s a canyon and another wall of granite behind it. He wanted to carve out a hall and put busts of important people in it along with copies of important documents like the Emancipation Proclamation and the Constitution.

So, if anyone were to find Mount Rushmore long after America existed, they’d know why four men’s faces were carved into the side of a mountain in South Dakota.

Borglum started a tunnel 70 feet deep, but when Congress found out about it, they told him he needed to focus on finishing the presidents before working on the Hall of Records. In 1938, he stopped and continued work on the main sculpture until he died in 1941.

Gutzon’s son Lincoln finished Mount Rushmore. He completed his father’s vision, but funding for the Hall of Records ran out due to the start of World War II.

People ask if other presidents could be carved in the memorial, but the answer is no for a couple reasons:

Borglum’s family wanted to honor his idea for the Hall of Records, and in 1998 they dug a hole in the floor of the 70-foot tunnel where they placed a time capsule.

A titanium box placed in a teakwood box contains 16 etched porcelain enameled tiles with all the information Borglum wanted to put in the Hall of Records. A granite cap tops the new cubby with one of Borglum’s quotes engraved upon it.

Ranger Maureen’s Love for Mount Rushmore and the NPS

For Maureen, Mount Rushmore National Memorial represents the power of the people and philosophies of America.

Many visitors don’t always know the names of the presidents carved on the side of Rushmore. Perhaps it’s because they’re from other countries or they aren’t aware for various other reasons. But, it doesn’t really matter who’s on the memorial because the sculpture represents bigger ideas: democracy, freedom, and an opportunity to be who you want to be as an individual.

By accident of birth in America, Ranger Maureen realizes she’s afforded privileges that not all people in this world have. It’s up to her to do what she can in her realm of the National Parks and keep those places available for everyone to enjoy and learn from.

The NPS takes care of our heritage: cultural, natural, and historical. The parks preserve places good and bad and allow us to look at things from different angles. To pull out instances of history into the light of day and ask: what happened, why it happened, if it’s still happening, and how do we fix it.

These challenges aren’t just human but also natural. Is it important to have bison? Should we protect polar bears and otters? These are big questions and the NPS exists to help us determine how we feel about them.