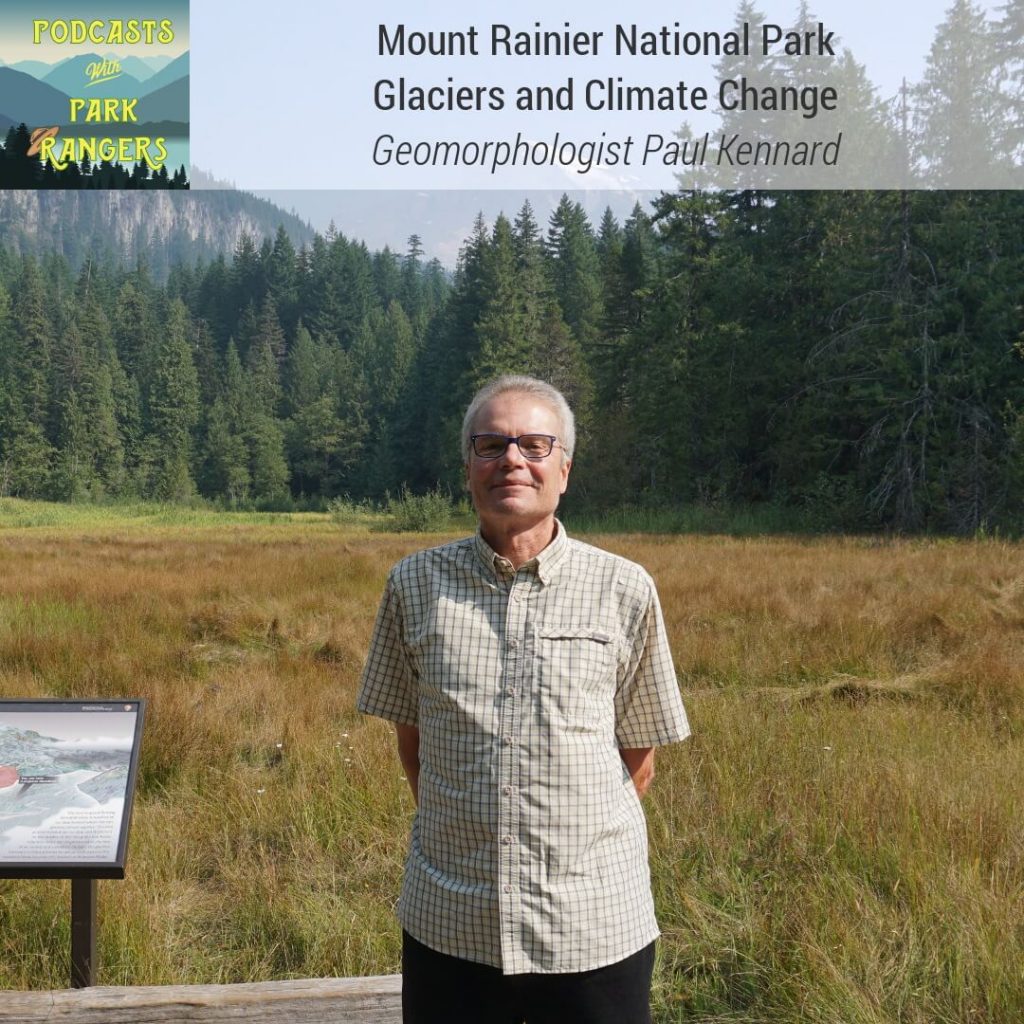 Geomorphologist Paul Kennard calls Mount Rainier National Park the canary in a coal mine when it comes to climate change. Glaciers on Rainier melt at a rapid rate, causing issues with the park’s rivers and wildlife. And, resource rangers are at the forefront of dealing with a rapidly changing environment. On this episode of Podcasts with Park Rangers, we talk about the effects of climate change on the most glaciated peak in the lower 48 states.

Since 2003, Paul has worked as the regional geomorphologist for Mount Rainier National Park. Geomorphologists study landscape features and look at the forces which create and destroy them. Paul calls it “geology on steroids” because unlike most geology, a lot of these changes occur in time spans as little as hours and up to about a decade.

Paul’s background in the oil industry, studying changes in glaciers, and research on forestry effects on salmon in rivers put him in a unique to work for the National Park Service when the position opened at Mount Rainier.

Mount Rainier is quite striking in it stands nearly 2 miles higher than all the other mountains in the area and because it’s capped with glaciers.

What is a Glacier?

A Glacier is a body of perennial ice. The ice actually moves under its own weight like a slow river. This movement differentiates a glacier from a perennial snowfield, which stays in place.

Snow from the winter accumulates, and when it sits over the winter, ice forms at the top of the glacier. The glacial ice flows to a lower part of the mountain and melts. The ice formation at the top and the melt at the bottom are definitive features of a glacier.

Mount Rainier is the most glaciated peak in lower 48 states of The United States. The rivers in Mount Rainier National Park are also milky in color — a prominent feature around some glaciers.

The water and debris flowing from the bottom of the glaciers break down into glacier flour. Glacier flour is a good indication of the existence of a glacier — colors range from striking teal similar to the lakes in Glacier National Park or the more muddy waters of the Nisqually River of Mount Rainier.

The last ice age in North America was approximately 12,000-13,000 years ago. At the time, glaciers extended far outside Mount Rainier National Park. Several other mini ice ages occurred in Mount Rainier’s history — the most recent is the little ice age of the mid-1800s. Many of the park’s glaciers were a full 1-1 ½ miles bigger than they are today.

There are a few advances of the glaciers around the 70s-80s at Mount Rainier. However, the present day glaciers are undeniably retreating due to climate change. The ice levels are at historic lows and the rate of ice loss has accelerated.

The glaciers at Mount Rainier shouldn’t completely melt, however, those glaciers lower than 10,000 feet are in peril. Rainier lost several glaciers over the past few decades, and the Paradise Glacier recently lost its well-known ice caves.

South facing glaciers melt the most because they naturally receive the most sun.

Paradise, a well-known location in Mount Rainier, is the snowiest place on earth. It averages about 650” of snow a year. However, glaciers lose about 30 ft of ice near the bottom every year without accounting for climate change. Current glaciers can’t keep up — even with monumental snow falls.

The glaciers should replenish their ice from the melt at the top of the glacier which flows down. However, because of climate change, we see the glaciers receding. Two issues are at play: more ice melt without replenishment or less snow.

How Do We Measure the Amount the Glaciers Have Receded?

They also check how deep the ice exists. Recently, the amount of snow on top of the glaciers reduced to create a negative mass balance. By scientific measurements, approximately 45 feet of ice has been lost since 2003.

Resource rangers also use photography to indicate the amount of glacial retreat. Currently, 1 cubic mile of ice exists on top of Mount Rainier.

As we look at the incidence of climate change — glaciers melt quickly and cause more sediment in the rivers. The rivers can’t hold as much water as before as the bottom of the rivers rise, and displacement of water is inevitable elsewhere into the park.

Record-breaking storms also pass through the United States, which means the rivers need to hold an excess amount of water from storms. To balance an influx of water and handle rising river beds is impossible, which create massive issues.

Rainier’s roads throughout the park were built before we knew the effects of climate change and constructed to old standards. Because the park is 97% wilderness, rangers have limited options to deal with rivers behaving badly.

Some roads run through valleys. However, the rivers are 15 feet or more above the road. So as the water level increases, we need to rely on the trees along the river bed to hold the water within its banks.

The rivers are now so dynamic and the aggradation of sediment in the beds is significant enough each river bed builds several feet every decade. Eventually, the trees along the river banks will lose the battle and the water will flow freely throughout the park.

Mount Rainier has seen an acceleration of debris flows start in areas previously covered in glaciers. The recently deglaciated locations contain heaps of sediment easily moved off steep slopes of the mountain by influxes of water.

During the fall, warm storms off the Pacific called Pineapple Expresses, or atmospheric rivers, create an influx of water on Rainier. Debris from the mountain moves further down river, throughout the park, and into neighboring cities — creating what we call a debris flow.

Debris flows are the most destructive form of landslide — debris accumulation builds in size as it moves down the mountain. The water and debris create boulders bigger than pickup trucks which pulse down rivers at fast speeds.

Rivers have a hard time dealing with the excess sediment, and impacts are felt outside the park. Additionally, endangered species, especially fish, are put at risk by the unpredictable debris flows.

How Do We Deal with Climate Change Issues?

The newly created imminent threats program at Mount Rainier National Park allows for sustainable repair and engineering of the road in trails through the park. Areas of the park which are resource sensitive can use various low-cost resources to repair issues which also affect wildlife the least.

For example, a recent windstorm in Longmire caused 100s-year-old growth trees to fall. Paul and other resource rangers used these trees to help fix a road which was closed off because of debris flows. This road survived every year since and was resilient against other debris flow threats because of the more natural and economical approach.

The Pineapple Express of 2006

A severe storm moved into the park in 2006, and any trail or roadway which crossed a waterway was damaged. Eighteen inches of rain in 18 hours served as a wakeup call to the changing climate.

The park shut down for 6 months to repair the damage from that storm. At least 10 debris flows were created, which the rivers of the park are still processing to this day. In response, Mount Rainier created the imminent threats program in the park.

Mount Rainier has shut down various parts of the park due to climate change. As mentioned previously, various historic roadways lie below the rivers due to necessity. Some parts of the park were unable to be saved from flooding. The trees on the banks of the rivers couldn’t withstand the hold the water within its banks and the roadways of the park flooded.

Paul’s Love for Mount Rainier National Park and the NPS

During Paul’s graduate studies, he connected with Mount Rainier through escapes to glacier research huts in the summers and volcanic studies throughout the Cascades after Mt St Helens’ eruption. And even after graduate school, he made sure to visit Rainier every year before he became employed at the park.

Paul hopes his river research and the imminent threats program can serve as standards for the NPS and the rest of the nation going forward as we face climate change.

As he retires, he will continue to work walking the rivers throughout the park and help develop methods to predict short-term changes in Rainier’s environment. The park is a huge complex system, and all pieces must be managed together: environmental, historical, and cultural.

Paul always loved Rainier, and it’s become part of him. The NPS serves as a place to preserve these natural places and allows for educational opportunities, so we can understand how we as a nation need to respond to climate change.