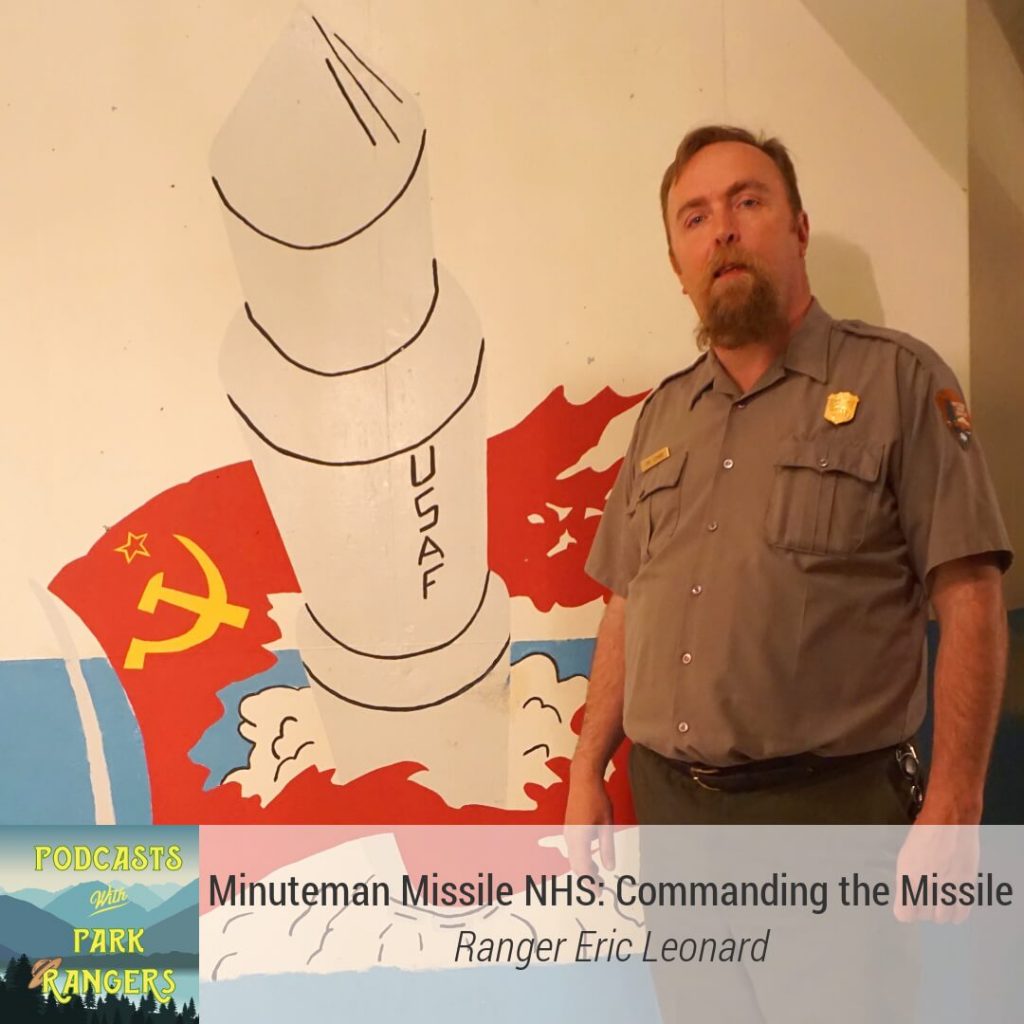 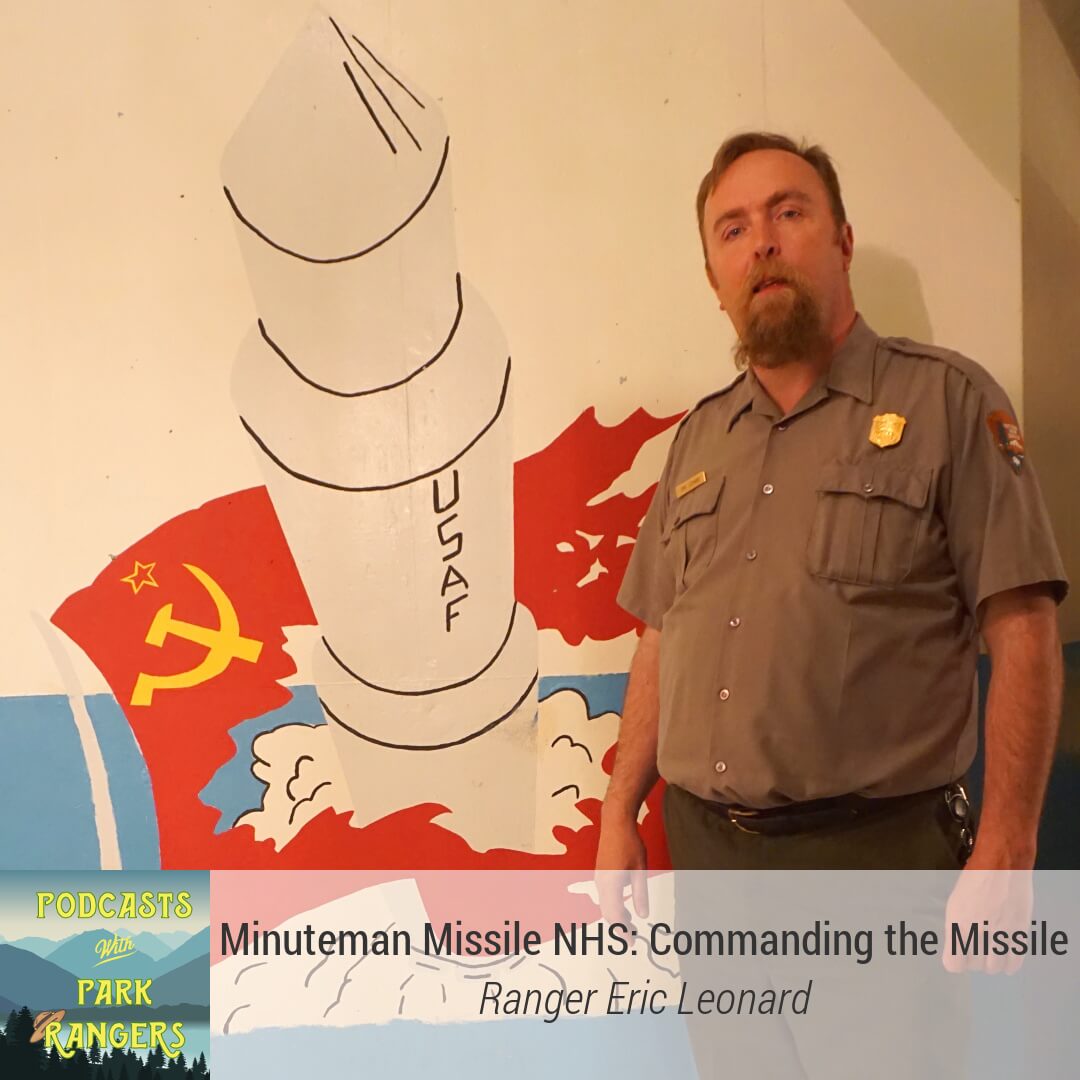 We take a look at the Cold War, as we discuss tensions with the USSR which led to the creation of a nuclear arsenal just beneath the plains of South Dakota. On this episode of Podcasts with Park Rangers, we visit Minuteman Missile National Historic Site.

What Does A Superintendent Do?

The superintendent is in charge of the park, but what does that mean? It means they make sure federal rules and regulations are followed, taxpayer funds are properly expended, and if something goes wrong the Superintendent is responsible.

Each park is specialized and has its own challenges. And while each park is independent, they still need to work as part of the bigger organization of the National Park System to uphold its mission.

Eric quotes the former director of the Park Service, Jon Jarvis, saying “We’re in the forever business.” His job is to make sure the park is preserved for future generations, and it will always look like it did the day it was set aside for preservation.

We were fortunate enough to do the interview in the Delta-01 Launch Control Facility. It’s a several acre compound: a long ranch style building surrounded by a barbed wire fence with signs indicating the use of deadly force authorized.

Sometimes modern visitors come for tours and are thrown off by the threatening signage — thinking that they shouldn’t be there.

In the past, there were 10 air force personnel stationed at Delta-01. Eight were topside, above ground, and two worked underground in the control center. The topside crew had three-day rotations, and those working in the control center worked 24 hours shifts, leaving the next day.

What Is The Missile?

In October 1957, the Soviets launches Sputnik into space. The world wonders, “If they can do that, what else can they do?” By the late 1950s, nuclear weapons go through a growth decade. They start at 15-20 kilotons, similar to that used in Hiroshima, to 100s of kilotons or megatons.

Originally, missiles were dropped with bombers and planes — these are easy to respond to because you can see them coming. With nuclear land-based missiles, response time is in mere minutes before anyone can react.

Sputnik sent the US into existential crisis — the Soviets could attack America at any time. So, the Eisenhower administration starts a secret program to create a faster missile to be deployed in a mass arsenal. The result is the Minuteman Missile — it uses solid fuel which is fast and responsive.

In the 60’s, the US created six missile fields of Minuteman Missiles. All but one are located in the Great Plains states. In general, the nuclear weapons system hasn’t changed much since it’s original design. The system is reliable, and it works well.

The missile combat crews are two people underground for each control center group. So, Alpha through Echo would have 10 missileers on duty at all times. Five different crews offer a redundancy in case something were to happen to any of the other groups. Each group would be able to launch any of the other team’s missiles.

It takes two people to turn keys and initiate a launch at one facility. But, one other control center had to also agree to the vote.

Security of the Missiles

Six security personnel protected the control center, as well as the 10 missile silos they were responsible for. If an alarm went off at a silo, a security team was dispatched to investigate.

When Does The Cold War Start?

It’s hotly debated… it could be argued that the end of World War II is the beginning of the Cold War. Alliances formed during the World War II are beginning to fray: it becomes the Free Countries versus the Communist Countries.

The nuclear weapons, weapons of mass destruction, are a defining characteristic of the Cold War. A weapon so destructive that their use is simply the threat. To say, don’t attack us first.

This is why the USSR wants nuclear weapons. Both sides work to make them faster and more powerful. All of the innovation for something that is never supposed to be used.

Local Opinions About The Missiles

Once the missile system is built, it ends up largely forgotten except for by the locals. Locals, in general, had little to no say about where these missiles were built.

Additionally, it was no secret about where the missiles were located. The USSR knew of their locations and had their 10 megaton missiles pointed at ours.

In the 1980s, people begin to protest the nuclear missiles. They published the location of each missile silo, alerting the general public to the presence of the nuclear arsenal once again.

As Americans drive to see the Badlands, Mount Rushmore, and Yellowstone, they don’t realize they are essentially driving through a nuclear missile field.

Ranger Eric poses the question, what’s the best use of a nuclear arsenal? It’s that it’s there, and could be used.

The Air Force is decommissioning missiles to the tune of about 4 a year. But, when they disarm the missiles they use them for practice and shoot them into the ocean. This also serves as a deterrent to other countries who may be looking to harm us.

With mutually assured destruction, a land-based missile system is a target for other countries. Since there aren’t a lot of people living in South Dakota. Additionally, since the missiles would be traveling north over the pole to the USSR, having them as far north as possible gives them less distance to travel.

The number has fluctuated over the years.

During the Kennedy administration, the Air Force approached the president and asked for 10,000 minuteman missiles. Defense Secretary Robert McNamara shot that down, and it could change the nature of our democracy.

McNamara thought we needed 400 missiles, but since that wasn’t politically acceptable at the time, he suggested 1,000. Today, we have 400 missiles (so McNamara eventually got his wish).

The Life of a Missileer

Missileers are the missile officers that would need to turn the key if necessary. There’s a procedure for everything, and life is lived by checklist. Training is done by checklist before ever going on missile duty.

One of the missileers in their interviews called it, “Hours of boredom, followed by seconds of sheer panic.” Level headed officers were necessary because constantly thinking about weapons of mass destruction could be unnerving.

Everything is highly technical, and the procedures were necessary to prevent accidents.

Missile officers might take turns sleeping on a 24 hours shift. What do you do with all the extra time? Several missileers work on masters degrees or build models to fill that time. Topside, there are board games and a basketball hoop to fill free time.

Some visitation is from Cold War Era veterans, and now they can show their families what they did at places like Minuteman Missile National Historic Site.

Additionally, it provokes civic dialogue about what it means to be an American and how we defend our country. You can see Delta-09 which housed a weapon, that in and of itself will provoke conversation.

Exploration of space is a result of the arms race, but those achievements are the result of missiles before the Minuteman II featured in the park. However, because of the technology that went to create minuteman II targeting system, we have cell phones today.

Thiokol, a company that created the solid rocket fuel for the Minuteman II used that technology to create the rocket boosters for the space shuttle.

The program was a massive springboard for engineering and science.

Activists used the Freedom of Information Act to find out where all the missile silos were located. This lead to protests in the late 70s – early 80s. Five of the six missile fields had very active local activist groups.

One of the missile fields was very close to a local’s home, and they put a giant peace sign near the end of the runway.

This park allows exploration of the question: “What are the choices we’ve made as a nation to defend ourselves?” And the NPS doesn’t try to sway you one way or another but gives enough information to form your own opinions on the topic.

We’ve stopped talking about nuclear weapons somewhat recently, but recent events have brought nuclear weapons up again. Exploring the consequences, what the weapons are for, how they are maintained, is important!

The dialogue book at the exhibit allows people to voice their opinions on Minuteman Missile National Historic Site. To read what others think is profound, and it runs the political gamut. It provides a space to talk about these issues without yelling at each other about opinions!

The Most Asked Question

It’s argued the Minuteman Missile system has never been used. Some say this isn’t true, but rather it’s been used every day since 1962. The missile systems’ best use is not pulling the trigger at all. However, it’s never been deployed.

Before this park, Eric worked at Andersonville National Historic Site — the deadliest place on American soil where US soldiers lost their lives in a Confederate prison. Also home of the American Prisoner of War Museum. Additionally, he’s been at other military history sites of great controversy.

When he heard about the establishment of Minuteman Missile National Historic Site in 1999, he wanted to work there from day one. Being the superintendent has been one of the most satisfying jobs and most challenging he’s ever had in his career. Probably right next to working at Andersonville, and managing an active military cemetery.

The park is just now coming into full bloom: the visitor center is 3 years old, the exhibits are 2 years, and they are just now finishing the park film. Operations for the site began in 2003, but it takes a long time for a park to really become established.

The Delta-01 facility isn’t quite up to 1000 visitors/day, so the visitor center serves the purpose of something to see and learn. The elevator to get down to the missile control center is 3 ft x 5 ft, so only about 8 people can go on the tour at a time.

Eric’s Thoughts on the NPS

Ranger Eric grew up in the big National Parks, Yellowstone in particular, with an uppercase P. Today, he prefers the parks with a lowercase p: the national historic sites, seashores, monuments, etc.

There are over 400 of them, which is great because the country is complicated. It’s a place to explore America.

“For me, a visit to a National Park is successful… IF, during that visit, you look at America in a way you’ve never seen it before.” – Superintendent Eric Leonard

All of our public lands are in search of volunteers. Whether it’s with the Bureau of Land Management, the US Forest Service or the National Park Service which includes Minuteman Missile National Historic Site, there’s probably a volunteer opportunity in your area. Find out more information by visiting Volunteer.gov.