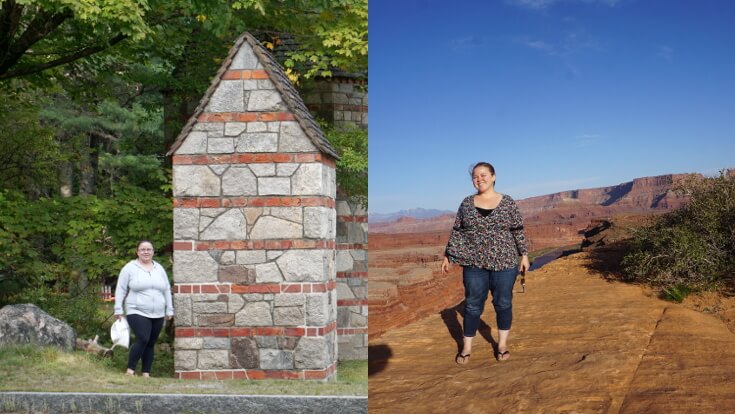 15 AprLose Weight Hiking: 7 Steps To Being The Hiker You Want To Be

Seven simple steps on one hiker’s journey to be healthier and lose weight hiking.


I’ve always imagined myself as a hiker who could conquer anything. One friend of mine told me, “Sarah, you never give up! You’re always out there kicking ass.” I felt a little pride in that. I wish I could’ve mustered up that feeling on the day I gave up on hiking…

Lucas and I had reserved tickets to see a cave in Carlsbad Caverns National Park which required a ¾ mile hike up the side of a mountain. We were told it’s a difficult hike, and we needed to be capable hikers. I thought, “Yea, I can do it! I’ve conquered mountains before…” 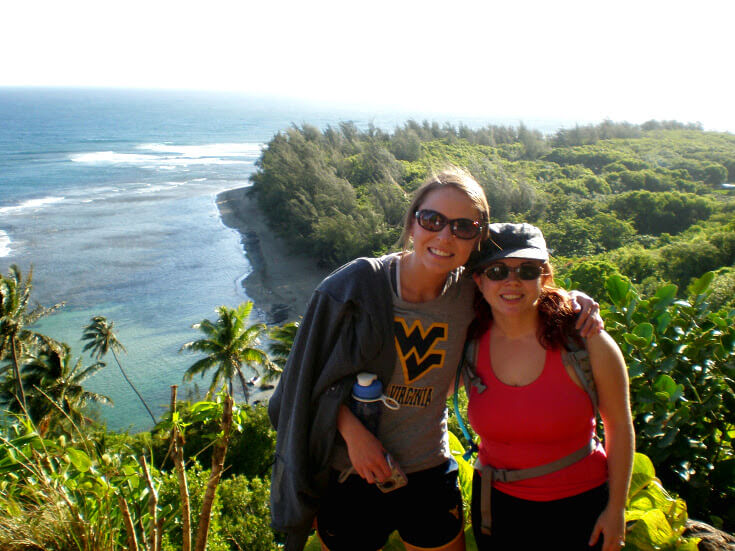 The fit hiker I used to be!

Related Articles: Camping and hiking tips to prepare you for your next trip

Maybe I should’ve thought about it, but it didn’t even cross my mind when I saw our tour group was composed of athletic people. I still thought to myself, I can do this.

Then the hike started…

Not long in my legs burned with every step. My throat began to sting as I gulped in as much air as possible. A little further, and my stomach turned. In spite of some short breaks, I became nauseated from hiking much faster than my usual pace.

I could no longer see our group. About halfway up I told Lucas to go on the tour without me. Everyone hiked far ahead of us, and I became embarrassed… I was no longer the hiker I thought I was.

Then I did something I never thought I would do

I gave up! I told Lucas to keep going, and I would wait in the parking lot. To his credit, Lucas did protest. He didn’t know me as someone to throw in the towel. 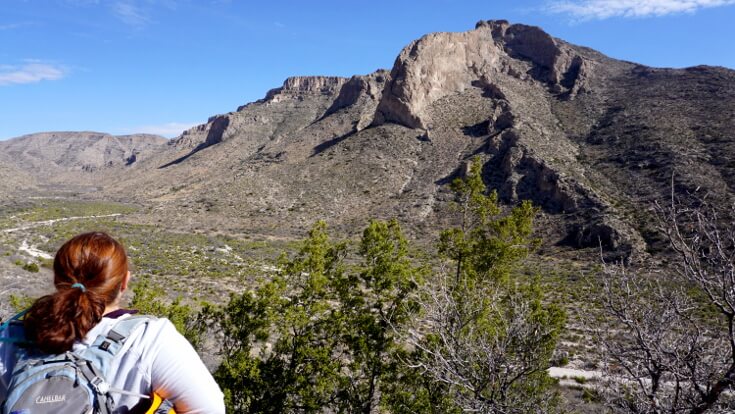 I’m pretty close to giving up on the hike…

As Lucas hiked out of sight, I sat on the side of the mountain as tears began to roll down my face. Unwanted thoughts came into my head: “I’m a sham, I say I’m this wonderful hiker online, but I hide the fact that I stop a lot and am often one of the slowest hikers on the trails.”

When put to task with a group of fit hikers, I finally I saw what I refused to see. I stopped taking care of myself, I gained weight, and I rarely hiked or pushed myself way too hard when I did. I hit rock bottom.

I could’ve wallowed there in self-pity for weeks. But, that’s not the person I want to be. I chose the life of exploration as a full-time RVer — I needed to step up and take advantage. I needed to plan to lose the weight and become the hiker I want to be.

In the parking lot, I came up with a plan to get the weight off, and I wanted to lose it while hiking. I love hiking, and I want to become the hiker I used to be. So, I came up with 7 steps to create the biggest difference in my fitness goals: 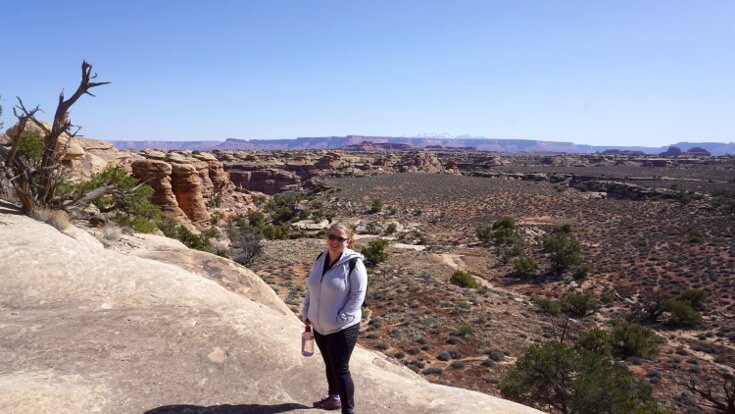 An easy hike at Canyonlands.

To lose weight while hiking, it’s best to start small.

I want to pick long and strenuous hikes because there’s a part of me who thinks I can do them. But, I’ve decided to scale back. Most of my hikes over the past month have been under three miles and somewhere between easy and moderate skill level.

Do I want to do more? Hell yea! But, some of these moderate short hikes have kicked my ass, which tells me I’m at about the right level I need to be right now. I’ll get there eventually. 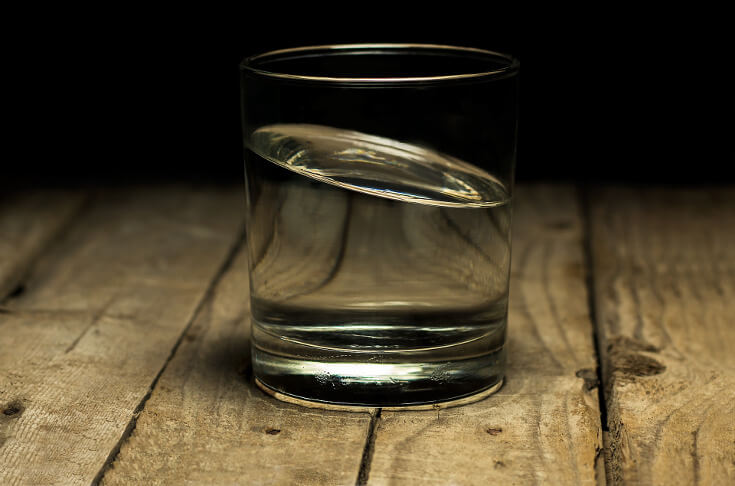 It’s been shown drinking water can help people lose weight. I try to get about 64 fl oz of water a day (if not more). Now, a good portion of that may or may not be sparkling water. And yea, I might drink my weight in La Croix regularly…

A walk around the RV park, or a quick workout inside — I set a goal to move at least 5-10 minutes a day MINIMUM. Some days it’s a lot more. However, it’s about instilling the habit of movement now, so I don’t become a couch potato later.

4) Switch to a whole foods diet 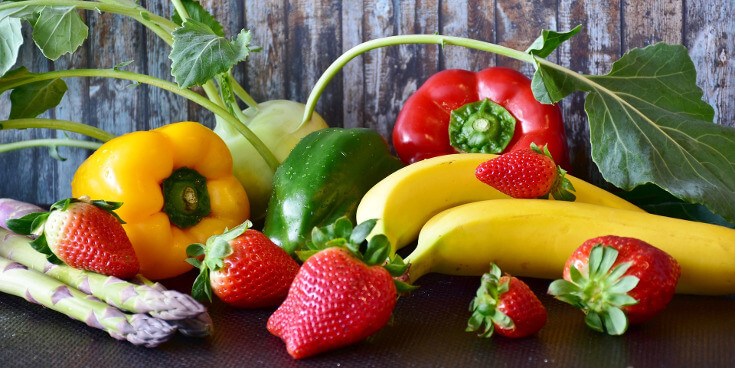 I wish hiking alone would make me lose the weight, but I know there’s work to be done in the kitchen.

I’ve been on a perpetual diet since about high school. Losing and regaining the same 20-30 pounds. Rather than hop on yet another diet plan, it’s high time I changed what I ate. I decided to move away from prepared foods, frozen dinners, fast food, and eating out all the time.

Now, we eat home most nights, and everything we eat is prepared from scratch OR something we know every single ingredient in. I have also removed sugar from our diet. That doesn’t mean we haven’t had sugar at all, but it has been rare — maybe once a month.

And, I haven’t done the one thing I hate while “dieting”: counting calories.

Somewhere along the line, drinking hasn’t been as much fun in my 30s as it was in my 20s. Hangovers last forever, the weight crept on, and a night of drinking could be pretty expensive. Drinking wasn’t doing me any favors anymore.

So, rather than pack in the empty calories, I decided to drop them. This decision may not be forever, nor for everyone. But, it’s working for me right now.

I often take breaks on the way up steep climbs because I need to. If it hurts to breathe, I’m thirsty, or I simply need to stop for a moment, I stop and take a break. Also, it’s not such a bad way to take in the view.

7) Pick at least one challenging hike a week 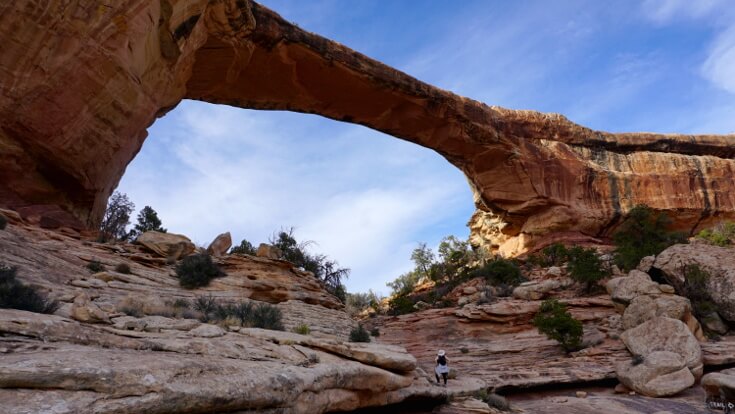 It’s not enough to stay on the easy path but to also go beyond it. So, I try to pick one hike a week slightly beyond what I’m currently comfortable with. This way, I’m improving and working towards more difficult hikes.

It’s been a little over a month, and I’ve lost weight hiking. I’ve officially gone down one size in pants, and none of this has been through extreme lifestyle changes. I don’t feel deprived, and I have had so much more energy as of late.

I’ve made a bit of progress. You can see my previously tight jeans are quite loose!

Am I the hiker I want to be yet? Not quite, but I will be. And I’m not going to give up again!

Now, this blog isn’t about losing weight, but I’ll update regarding my weight loss progress every once in a while. So, if you would like to follow along, sign up for updates below! 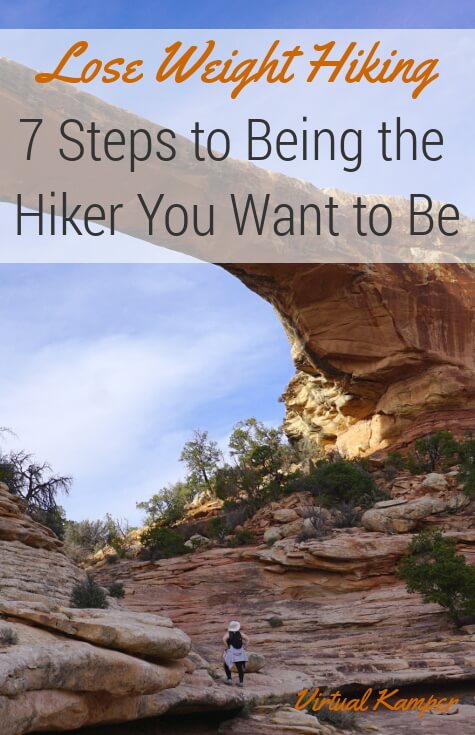