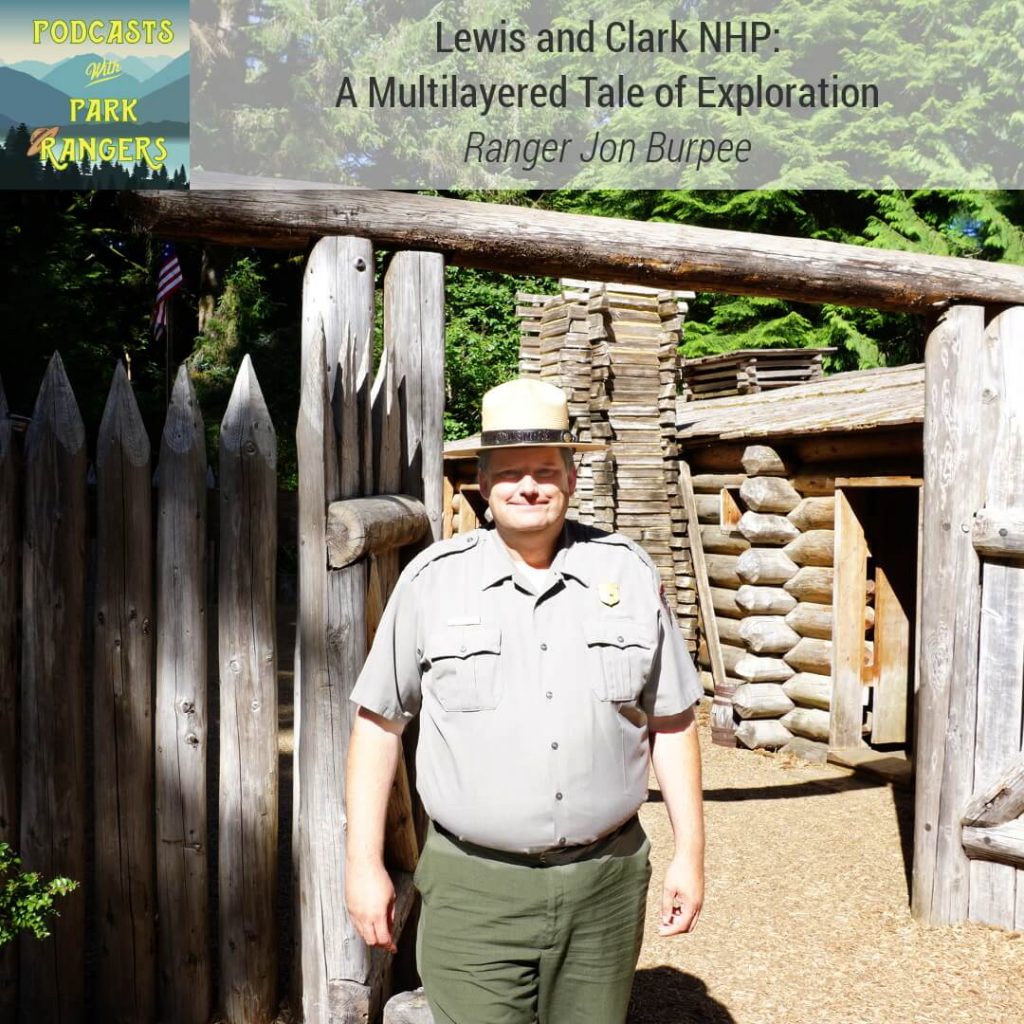 03 SepLewis and Clark NHP: A Multilayered Tale of Exploration – PWPR 20

The tale of Lewis and Clark is one many Americans heard in school. Two mountain men who explore the west with a passion for adventure. While many of us romanticize the expedition, there’s a lot more to this story. The Corps of Discovery, composed of 33 people, heads west with military men, hunters, translators, a slave and a dog. This won’t be the tale you remember from high school.

Those two particular adventures lead him to a 20-year career with the NPS. And, we coincidentally find him back at Fort Clatsop for today’s interview. He’s now superintendent of the park sharing with us the same history he found enchanting as a child.

Today, many people follow the expedition of Lewis and Clark by car — they start in St Louis and drive to Fort Clatsop in Oregon. Located on the Pacific along the Columbia River, the park marks the western end of Lewis and Clark’s journey.

Fort Clatsop is a few miles from the Ocean, but near all the resources necessary to spend 4-5 months over the winter. Wood, water and elk are prolific throughout the area and allowed for survival.

Who Are Lewis and Clark?

Lewis and Clark both embodied the young republic — they’re both landed gentry from Virginia families.

President Jefferson hired Lewis as his secretary. Both knew each other growing up, and they both bonded as bachelors in the White House. They discussed the importance of science and the exploration of America in order to combat British corporate interests.

Shortly after the Louisiana Purchase, President Jefferson entrusted Lewis to head west and explore the new territory. Jefferson hoped to find Wooly Mammoths out west. And, the expedition was an opportunity to prove America was just as good if not better than the rest of the western world.

Lewis began to round up an army of men for the expedition, and he brought on Clark in St. Louis. In the past, the two served as officers together, and at one point Lewis served under Clark.

As the younger brother of a Revolutionary War hero, Clark found the prospective journey compelling as a way to make his own name in the world.

Forevermore, the two names Lewis and Clark would be entwined in American history.

The Corps of Discovery

Many people think of Lewis and Clark as two mountain men along with a group of ragtag individuals headed west. However, the group of 33 people was more like a military outfit.

Lewis served as Captain, and even though Clark is named Lieutenant, Lewis called him Captain as well. They started out with a larger group up until Fort Mandan in North Dakota — where they spent the first winter of the expedition.

Not All of the Corps of Discovery Are Military

While a good number of the 33 people headed west were military, a few worked in entirely different roles — hunters and translators also went on the expedition to the Pacific.

French-Canadian translator Toussaint Charbonneau joined the Corps of Discovery along with his wife Sacagawea.

Modern history knows Sacagawea well, and she’s a valuable member of the party. No tribe would see Lewis and Clark’s crew as hostile because they had a woman as part of the group. As we’ll see later, she played a big role in this story.

Other expedition members included French-Canadians and Americans, some of whom are military.

One notable member of the party was Clark’s servant York. However, you can’t really say he chose to go on this journey because he was enslaved.

York played a surprising role over and over again. In a time where slaves couldn’t carry rifles, York was entrusted with one. And, he proved to be a great hunter for the Corps of Discovery.

For the natives, York was a curiosity. Many of them had never seen a black man before. One notable journal entry talks about how the Mandan are entranced with the color of York’s skin and try to “rub the color off”. You have to wonder: How did that make York feel?

Unfortunately, we’ll never know. His side of this story was never recorded.

Even though York was given a voice and a vote amongst the Corps of Discovery, at the end he was put back into slavery. Later in life, Clark freed him, but not directly after the journey when many believe he deserved his freedom.

While gathering supplies in Pittsburgh, Lewis bought a Newfoundland dog. He spent $20 on the new pet — a huge amount considering $20 was about 1 ½ months pay at the time.

The dog was named Seaman, and he also became a member of the expedition. He scared away a grizzly bear and diverted a buffalo stampede while he protected the group. In fact, he’s often mentioned more than the enlisted men in Lewis and Clark’s journals.

The Rocky Mountains Present a Dilemma

President Jefferson instructed Lewis to find a water route to the Pacific — the “Northwest Passage”.

The Corps of Discovery traveled with large boats and expected an easy path west. However, things dramatically changed as they hit the Rocky Mountains.

Imagine the disappointment of Lewis and Clark as they crested the first set of mountains in the Rockies. For miles and miles, there were only mountains to be seen. To continue on, they needed to procure horses.

Sacagawea and an Amazing Coincidence

Toussaint Charbonneau brought his teenage wife Sacagawea with him to help translate with the native peoples, and in a quirky moment of American history, she played a pivotal role. Before this moment, Sacagawea was abducted in a raid on the Shoshone people as a young girl. She went on to marry Charbonneau later in life, and they had a child together.

As she translated for Lewis and Clark in an attempt to procure horses, she realized the person she spoke with was her brother. If not for the reunion, Lewis and Clark would’ve never made it west.

As the Corps of Discovery made it to the Pacific, Sacagawea asked to go see the ocean with the men. It’s obvious from the journals she desired to see the continent just as much as the men did. Perhaps it was the adventure she desired.

Lewis and Clark kept accurate maps during their journey. They documented resources found along the way and painted a picture of the way west. They spent 4 months on the coast, but the impact was huge: it was a claim to the Oregon country for America.

However, as much as it is a story of a rollicking good time, it’s also a harbinger of challenges to come for the native peoples. Even with Lewis and Clark, disease began to spread west.

At the western end of the expedition, Lewis and Clark arrive in bad condition. It’s cold, wet and rainy as the winter months crept in. Their clothing had rotted off their backs, they were hungry, and they traded away most of their goods.

While they weren’t in the best condition, they found the area contained a good deal of resources for survival. So, they built Fort Clatsop to weather the next 4 months of winter.

For most of the journey, Lewis and Clark have little trouble with the Native peoples. In general, they were received peacefully and were able to trade.

However, the Clatsop and Chinook tribes in the area weren’t quite as receptive to their arrival.

Relations with the Chinook and Clatsop Tribes

Lewis and Clark ran into an issue with the local tribes because the tribes were already accustomed to trading with French fur traders. The locals understood the value of goods, and the Corps of Discovery had very little of worth to trade.

At one point, Sacagawea had a blue beaded belt she valued and had to trade for otter skins. The Corps held out hope a trade ship would stop by to help them resupply. However, that never happens either.

The Clatsop and Chinook tribes see their canoes as living things — they’re sacred and passed down for generations. So, when Lewis and Clark attempt to barter for a canoe necessary for the trip home, they were unable to get one.

Then, the Corps of Discovery decided to steal a canoe, which would leave a lasting legacy amongst the local tribes.

For Ranger Jon, he often wonders where the end of the trail might be. Some places in Lewis and Clark National Historic Park could be considered the end, but perhaps the trail still lives on today. Many people travel it every year, and the spirit of exploration continues on with them.

He has a deep love for Lewis and Clark National Historic Park because the tale told is one from a multitude of perspectives. And while he may not have appreciated it all as a child, he loves to dig deep into the history and tell those stories today.

He finds you can discover a deep history at many of the National Park units in the NPS. And for him, that varied history is what makes the Park Service worth preserving. There’s a park out there for everyone, and we can all take a journey to discover what suits us.