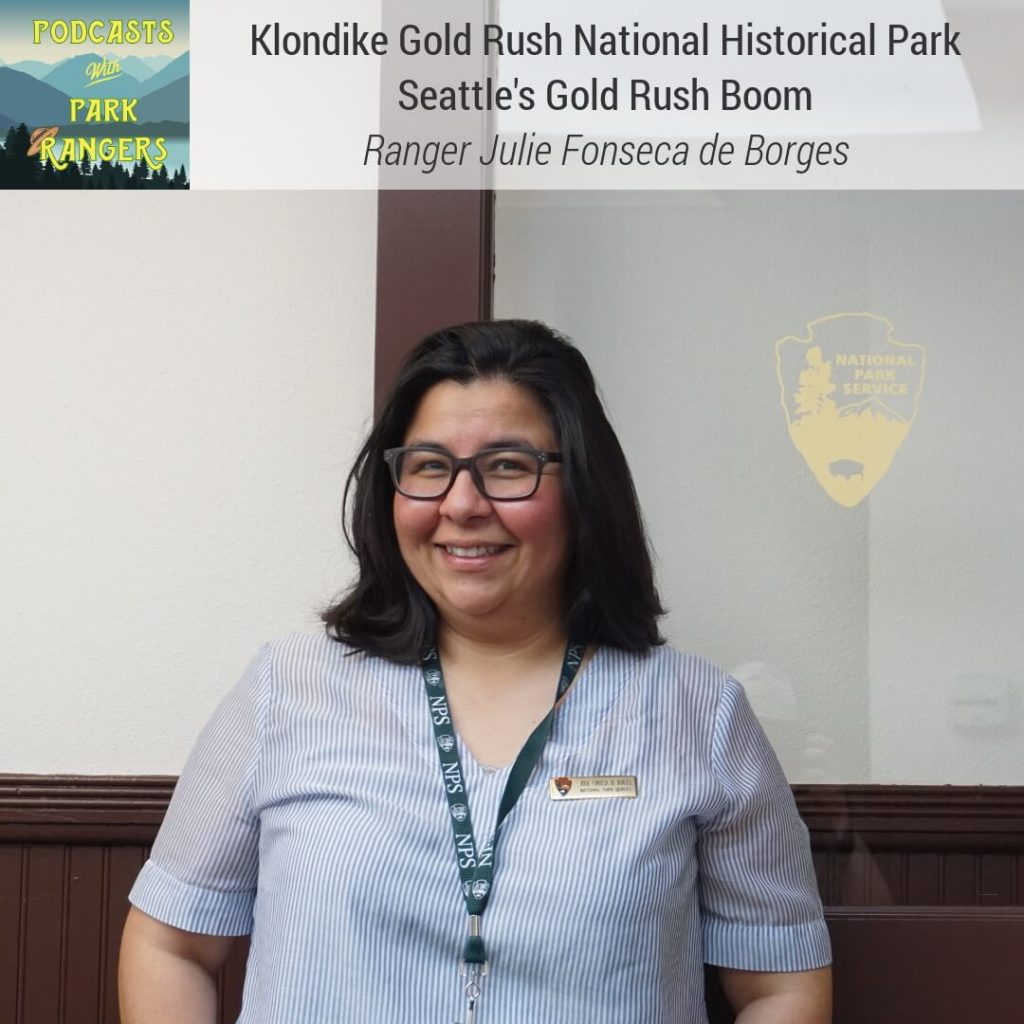 The Klondike Gold Rush of 1897 caused an economic boom for the city of Seattle. People flocked to the Pacific Northwest to gather supplies and board steamships north to Alaska. Newspapers promised new wealth and riches for any who made it to the Klondike. On this episode of Podcasts with Park Rangers, we take a look at how the Gold Rush made Seattle the city it is today.

Ranger Julie Fonseca de Borges is Chief of Interpretation for the Seattle area National Park units which include Klondike Gold Rush National Historical Park. She’s been a Park Ranger for almost 13 years, and specifically at Klondike for 4 of those years.

With a background in journalism and art education, Julie’s start in the parks began at Chamizal National Memorial where they celebrate the peaceful resolution of a 100-year old border dispute between the US and Mexico through the arts. With Ranger Julie’s background, she created art education programs for the public before she relocated to Seattle.

Klondike is unique because it’s an international park which celebrates the 1897 Gold Rush. Two US sites — located in Seattle, WA and Skagway, AK — commemorate the event.

Seattle’s history is important because of the 100,000 people who journeyed to the Klondike for the Gold Rush, about 70,000 came through Seattle. The majority of the people through Seattle took a boat to either Skagway or Dyea, AK.

The story in Seattle is the experience most people who ventured to the Klondike experienced. People landed in Skagway and then journeyed up to Dawson City and beyond to the gold fields. The site in Canada tells more of the tale about the gold fields themselves.

The Seattle area is the home of the Coast Salish people for generations. And in the mid-1800’s, Euro-Americans begin to settle in the area.

The landscape is quite a bit different than what you’d find in Seattle today. New settlers found hilly tidal flats with a lot of wooded areas. The Puget Sound offered great access to seafood, and most people found it a nice place to settle because of the resources.

The Denny Party receives credit for founding the city of Seattle. The coast was a too cold and harsh, and they decided to move inland to what is now Pioneer Square in the heart of Seattle.

The Coast Salish traded with the Denny Party as they settled into the area and helped them survive their first winter. The group named the new settlement after the Suquamish Chief Si’ahl, and he’s commonly referred to today as Chief Seattle.

As more settlers arrived, people began to fill in the hilly landscape with dirt so the city was more flat and amenable to building. However, this also displaced the Salishan people, because to be a modern city you couldn’t have Native American people living in the city — a harsh reality of Seattle’s history.

In the 1950s-70s, a resurgence of Coast Salish culture and history made its way back into Seattle. Their culture is still alive and thriving today in spite of past efforts to displace them out of the city — today the Salishan people are celebrated.

With an influx of people moving from the midwest, new structures needed to be built in order to support the new settlers. And since Seattle had an abundance of wood, they built most of the structures with local timber.

In 1889, a fire broke out at the local glue factory. Since so many of the structures in downtown Seattle were close together, the fire progressed from building to building. And the fact they constructed city plumbing out of wood didn’t help matters either.

The volunteer fire department took time to round up, and the tide was out so retrieving water to extinguish the fire proved difficult. Fortunately, the fire moved slow enough such that no one died. However, the entire downtown was decimated.

Undeterred by the fire’s destruction, city officials decide to rebuild Seattle. The city would rise from the fires like a Phoenix and be better than it ever was before.

Officials decide the city of hills needs to be flatter and more land needs to be next to the Puget Sound. So, dirt from the hills on the east side of the city is pulled down to fill in the gaps on the west side. For existing buildings, the second floor would become street level and the first level would become the basement.

New structures used brick, and people built the buildings with the intention of the second floor becoming the grand entryway. During the transition, open pits and alleyways connected the buildings via the basements and were open at street level. People had to be careful or else they could fall into the pits.

Today, you can see tiny purple square windows on the sidewalks which allow light to enter the lower level tunnels still in existence today.

People flock to Seattle because the rebuilding efforts created jobs. And in 1897, the US found itself in the midst of an economic depression.

In July 1897, Klondike gold finds its way into Seattle. Newspapers around the country proclaim all you have to do is get yourself to the Klondike and you will find gold like the Klondike Kings and Queens of Seattle.

The American identity says if you work hard, you can make a better life for yourself. So, this idea propels people west towards Seattle.

The National Park site is located in the Cadillac Hotel, one of the first 10 buildings built after the Great Fire. The bottom of the building where the exhibits are today held shops and restaurants. And the upper stories were single occupancy hotel rooms, home to the people who sold goods and services to those traveling to the Klondike.

Stampeders – Who Are the People of the Klondike Gold Rush?

The exhibits at the Visitor Center follow 5 different Klondike stampeders which examine why people went on the journey north. For as many people who went there were just as many stories as to why. Some people wanted wealth, others adventure, some wanted freedom or to find another life.

Seattle drew people west with a great advertising campaign. Everything a stampeder needed could be found in Seattle, and from there they could get on a boat towards the gold fields.

The Canadian Mounties required stampeders to bring a year’s worth of materials to survive — a literal ton of supplies — which in today’s dollars costs about $20-25,000. Of course, all the stores in Seattle had the required shopping list.

People borrowed money from banks and business, or communities came together to send one person to chase fortunes for all of them.

Strike it Rich? Or Fool’s Gold?

Only 50 of the 100,000 made any amount of wealth and kept it for any significant amount of time. People didn’t realize how difficult the trip would be. Two routes existed into the Yukon:

The people who made the most were those who sold supplies and took advantage of the Stampeders.

Many stampeders turned around and started a life in Seattle. Some found a claim with gold and sold it off — this is how Nordstrom made his money. And others came back penniless but with a wealth of stories.

Seattle reaped the rewards of the Klondike Gold Rush. Even though it lasted only 2 years, the influx of people and wealth birthed of the city we know today.

Starting in the 2000’s, the city now experiences another sort of gold rush through a tech boom. And, an influx people with new ideas and investments flock to the anchor of the Pacific Northwest once again.

Throughout each step of the tale at Klondike Gold Rush National Historical Park, we find stories of opportunity. As Chief of Interpretation, Julie sees the opportunity to go into other stories at the park: the gold rush’s impact to Native Americans and the Non-Euro American stories.

Just as Seattle was a gateway to gold fields, today it’s a gateway for other National Parks. Ranger Julie hopes to dive into the tale of how Seattle is a stepping off point today for park exploration in the Pacific Northwest.

With regards to the National Parks, it takes a lot for a designated site. The unit must preserve a unique history or resource and it must detail what it means to be an American. Every National Park site helps define and tell the American story — the triumphant tales and the stories which we may not be so proud of.

The NPS is an agency and cultural institution which defines what it means to be an American and where we are going in the future. For Julie, the parks help us to strive to be better.