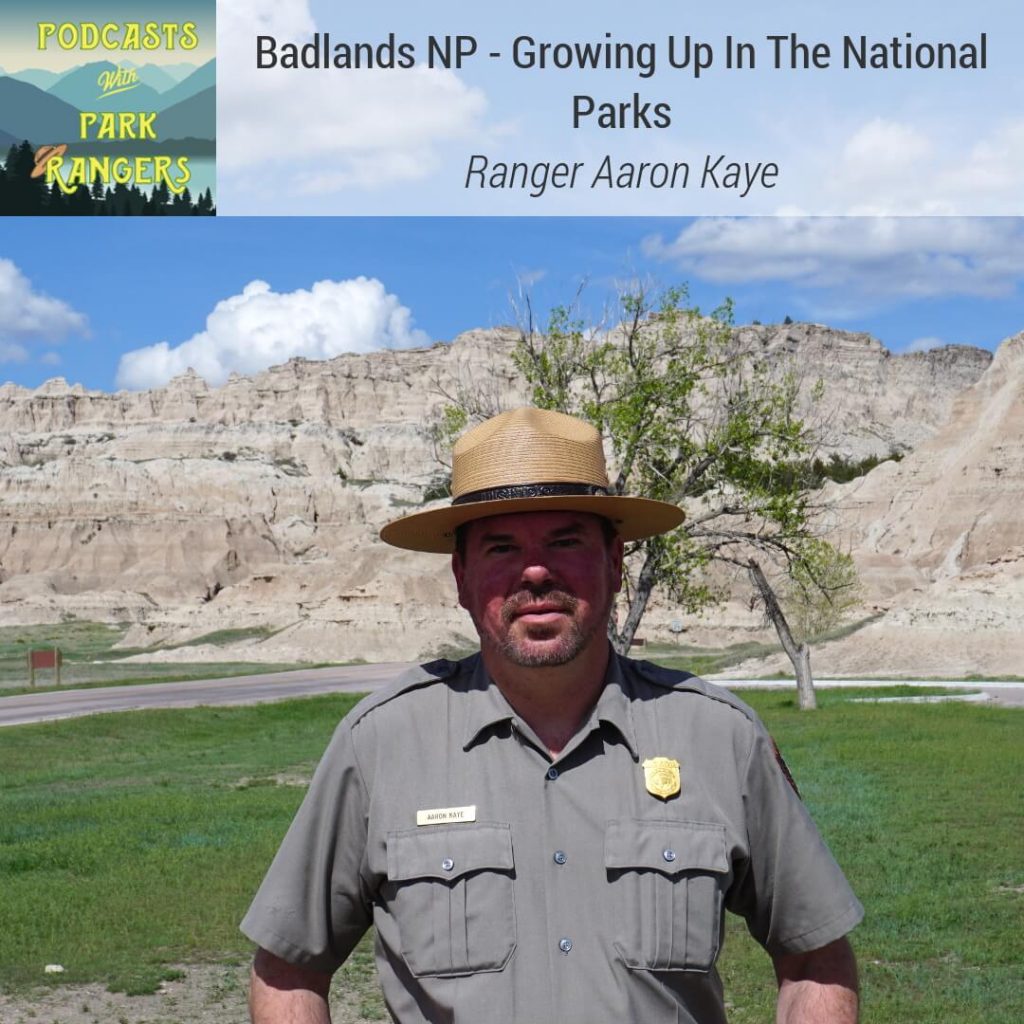 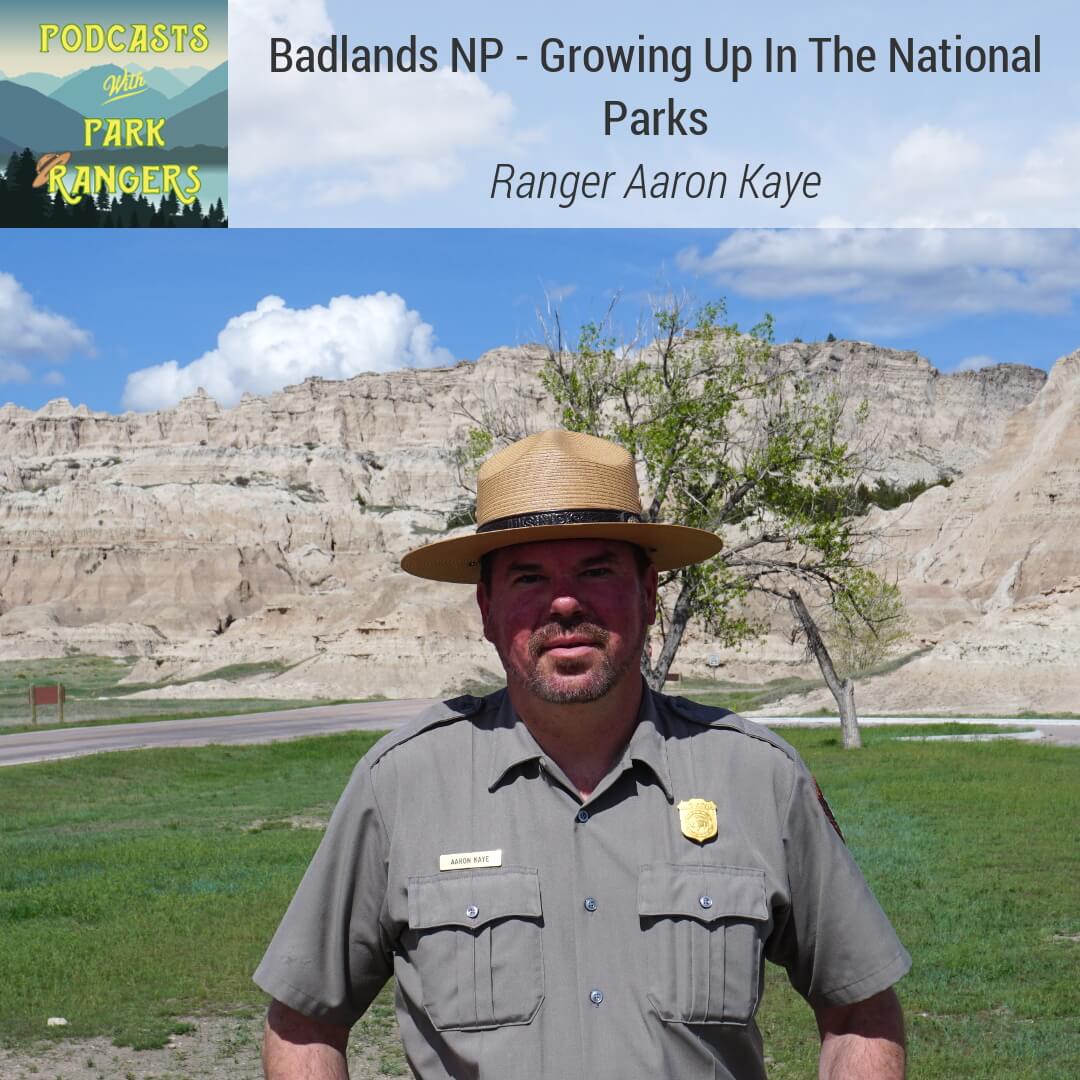 What would it be like growing up in the National Parks? Ranger Aaron Kaye’s father was also a Park Ranger, and the National Parks were his backyard. On this episode of Podcasts with Park Rangers, we discuss Aaron’s unique story and the many jobs he’s had in the Park Service.

Ranger Aaron has a degree in anthropology, with an emphasis in Southwest Archaeology. He used his degree to get a start in the National Park Service at parks like Mesa Verde and Hovenweep. During his time at those locations, he focused on Archaeoastronomy which explores the relationship of archaeological sites to the stars in the sky.

He’s been with the NPS for 27 years, and at Badlands National Park since 1999. He started as an Interpretive Park Ranger, and now works as a Supervisory Park Ranger.

The unique thing about Aaron — he lived his life growing up in the National Parks because his dad was also a Park Ranger. Which in turn, inspired him to become one as well.

Growing Up In The National Parks

Early on in Aaron’s life, his family would move around every 3-5 years so that his father could progress in his career with the Park Service. And, he usually attended traditional public schools. Of course, moving every so often made it difficult to make friends.

Calling the National Parks his backyard for most of his life has fostered a love for the outdoors and outdoor recreation. Additionally, taking a trip to a major city was a big deal, and quite scary in his younger years. Nowadays, he’s grown used to it and can enjoy trips to places like Denver more often.

Nowadays, he still lives in the parks, and his commute is quite short! Usually, only a walk or a bike ride away.

Ranger Aaron has always wanted to be a generalist, and do a little bit of everything. In the past, Park Rangers used to be generalists, but over time they’ve become more specialized. Essentially a tool for every task.

The variety of skills Aaron has picked up: Wildland Fire, Search and Rescue, EMT, and Resource Management

He’s especially enjoyed doing Wildland Firework, and it’s a bit of a rush. For several years, he’d go down to Mesa Verde and working on a helitack team in helicopters. The team fights wildfires in their early stages to hopefully put them about before they get too out of control. Additionally, he’s also fought fires from a fire truck, and participated in prescribed burns.

Now, Ranger Aaron fights fewer fires and stays at the park with his dog.

As a requirement at Badlands National Park, he was required to get his EMT due to how remote the park is. They see a wide variety of injuries from butte rash, which is scratches from falling in the terrain to the more serious stroke or heart attack.

Living In The National Parks

It’s a unique experience living in the National Parks. Some of the people you work with often become your friends.

In the Badlands, Ranger Aaron lives in a community with all the other Park Rangers called the quad. The Rangers get together and do activities like Volleyball in their free time, and the summer is especially fun because about 20-30 seasonals also live in the park.

One of the highlights of Aaron’s career is participating in the bison roundup. The roundups allow the National Park to assess the bison’s health, and to give some of the animals to neighboring parks or Native American tribes.

He says it’s easily one of the top five experiences of his life. They use ATVs, tractors, and even helicopters to round up herds.

Each bison must be weighed, measured and they also take a blood sample to ensure health. This means you’re really close to the bison during the roundup, and Aaron never thought he would ever do anything like that in his entire career!

Aaron’s Love for Badlands National Park and the NPS

Aaron’s favorite thing to do at Badlands National Park is to go fishing. It’s one of the things he’s loved to do since he was a kid. By fishing, he also learned about the resource. Additionally, it’s helped him to orient where he’s at in the Park — now he knows it like the back of his hand.

Other favorites of his at the National Park are the fossils and exploring the park in general.

At Badlands National Park, and many other national parks, they have an Artist in Residence program. Artists can express their connection to the resource through their medium of work while living in the National Park for a month and a half.

They get access to housing and the park, and in return, they provide educational programming in the local schools and donate one of the pieces of artwork they created to the park to be added to the National Park’s collection.