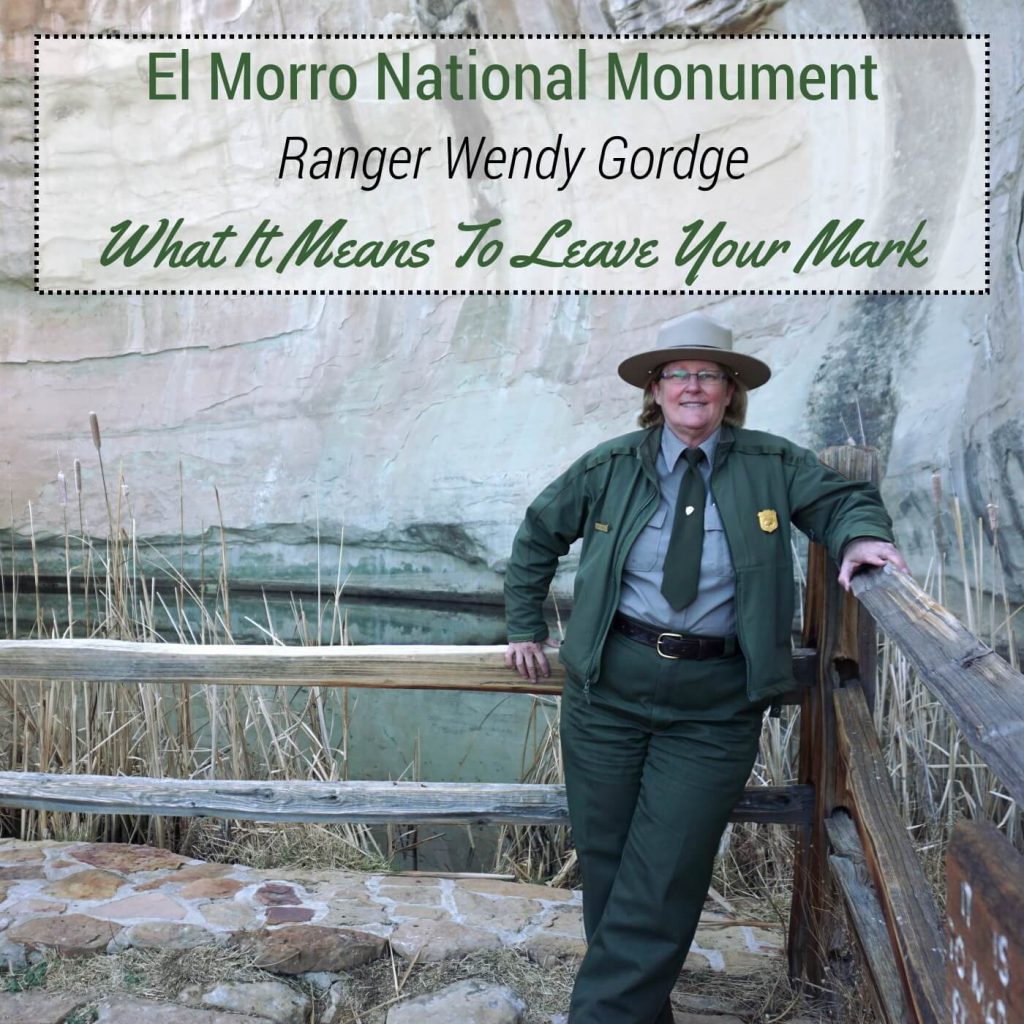 27 AprEl Morro NM: What It Means To Leave Your Mark – PWPR 3 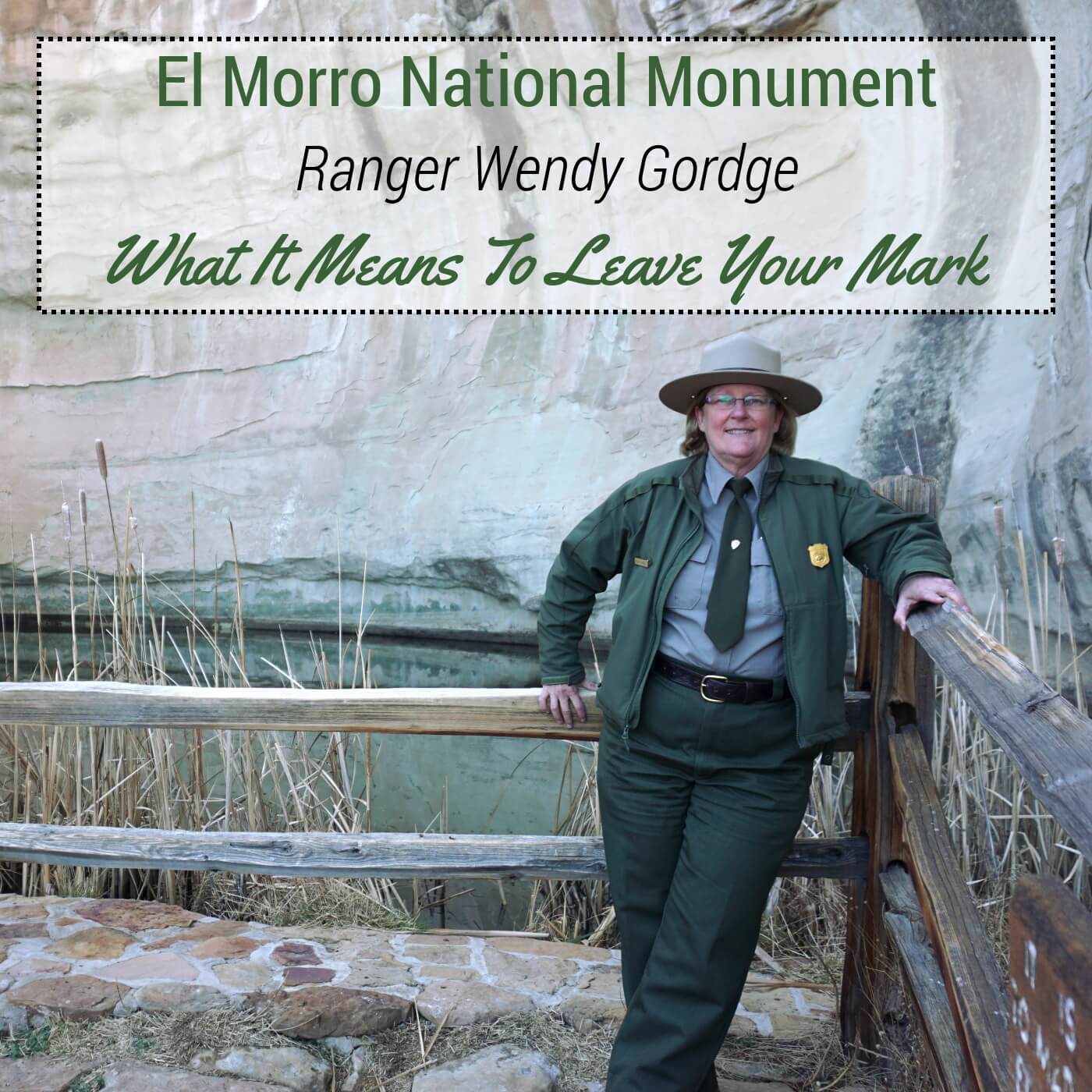 A park well known for historical graffiti – El Morro National Monument is a hidden gem of the National Park System. We speak with Ranger Wendy Gordge about the park’s unique history, what it means to leave your mark, and the camel corp.

Wendy Gordge is the lead interpretive ranger at El Morro National Monument. She worked at ten different National Parks, but for the past 10 years, she’s called El Morro home.

She grew up visiting National Parks as a kid and wanted to work outdoors with the public. So, the National Park Service is a great fit.

The biggest difference between the two is how they are added to the National Park System. Presidential Proclamation designates National Monuments. National Parks are created via congressional vote.

The name, El Morro, means the headland in Spanish. The National Monument is the second place to receive such a designation in 1906, by President Teddy Roosevelt.

Located in the Northwest corner of New Mexico in a high desert plain, the bluff stands out as very intricate, unusual and beautiful. Made of beautiful Zuni sandstone, and its base is a small pond. The mesa top is composed of slick rock with tall trees growing on the surface.

It’s famous for historic inscriptions — over 2000 inscriptions and several hundred Native American petroglyphs are on the sandstone bluff.

The Ancestral Puebloans built a village on the top of the mesa. The location is ideal because at the base of the mesa, there’s a pool of water — the only water source for many miles. People climb down the cliff to retrieve water via hand-and-toe holds carved into the cliff face. Additionally, small depressions in the rock, called tinajas, catch water to drink.

Archaeologists believe about 600 people called the mesa home. Today, the modern Puebloan people call the place Atsinna, place of writing on the rock.

The Ancestral Puebloans drew Petroglyphs on the sandstone. But, their meaning is unknown. Depicted are carvings of bighorn sheep and paw prints of a grizzly bear.

A western viewpoint might see the village site and believe it’s abandoned. However, the descendants of the Ancestral Puebloans don’t see it that way. The spirit of their ancestors still dwells here. The modern Puebloan people consider this place sacred and return to visit their ancestors.

The people who maintain the village site are primarily from the local Zuni who descended from the Ancestral Puebloans. The Laguna and the Acoma Pueblos have strong ties as well.

Why venture north into America? The Conquistadors followed rumors of the 7 cities of gold. Quests to missionize native people, colonize, and gain wealth through land and settlement are also common.

Juan de Oñate is the first Spaniard to inscribe his name in the rock in 1605, 15 years before the Pilgrims landed in the US.

A favorite story of Wendy’s: Early Spanish explorer and conquistador Gaspar Pérez de Villagrá, part of the Oñate’s expedition, fell behind and rushed to catch up with the group. He became separated from his horse and wandered through the desert for days.

He walked backward to thwart being tracked by hostile parties. Then, he walked with his shoes on backward. At last, he found the pool at the base of El Morro which ensured his survival. His never carved his name on the bluff. However, he later wrote poetry about how El Morro helped him survive.

In 1848, via the Treaty of Guadalupe Hidalgo, the area becomes US soil. Shortly after in 1849, gold is discovered in California, and people journeyed westward.

Richard H Kern, an artist and part of an army topographical expedition, was one of the first Americans to inscribe his name on the rock. He sketched all the inscriptions he found, and there were no English ones at the time.

Pioneer families began to head west to settle in California, and both men and women inscribed their names into El Morro. Sallie Fox, a 12-year-old girl, maybe the youngest who wrote her name in the rock. Her inscription has weathered and begun to fade.

The army attempted to create better routes to California and sent an expedition of the US camel corp to test the usefulness of the animals on a long journey across the desert. The camels were successful and often outperformed horses and mules.

But, we don’t see camels today in our history books. The civil war caught people’s attention, and after the war, the railroad began to run to California. Additionally, Jefferson Davis, president of the Confederacy, had originally come up with the idea, and no one wanted to pursue any of his ideas after the civil war ended.

Why leave their mark?

El Morro was a difficult place to get to, and it was a point of pride to say that they made it there.

The Rose-Baley wagon train, of which Sallie Fox was a member, indicated they were the first pioneer train to make it to El Morro. As they continued on, it became insufferably hot and water became scarcer.

They reached the boundary between Arizona and California and attempted to cross the Colorado River. Then, Mojave Indians attacked as they crossed the river. The livestock scattered, and several of people in the party died, many became injured.

They traveled 600 miles back to Albuquerque rather than continue the last 300 miles into California due to fear of the unknown. They returned by way of El Morro, but none of them inscribed their names on the way back.

Water drew people here and water will dismantle the marks people left due to how easily sandstone erodes.

First attempts by the NPS at preservation were well-meaning:

Efforts to seal in an inscription can cause water to travel laterally through cracks. The diversion of water only causes problems with other inscriptions.

Today, we preserve the inscriptions with:

If an inscription is chipping or flaking, conservators can use special epoxies work to put it back together. The inscriptions at El Morro National Monument won’t last forever. In time, nature will take its toll.

In 2014, 2016 and 2018, Wendy Gordge arranged for camels from Texas to visit the National Monument as a commemoration of the camel corp which passed through in 1857.

A historical reenactor, Doug Baum, sets up an encampment with 4 camels. Several days of special programs and school programs bring kids to the monument. The reenactment will occur later this year in 2018.

Wendy loves El Morro National Monument and is a favorite place of employment.

The history, stories and natural beauty of the place fascinate her. It’s rather unusual to find a National Monument in a small concise space with so much history in crossroads of different cultures.

Some people are well known, and others are everyday folk with amazing stories to tell.

The National Park Service resonates with Wendy because it preserves and protects the best the country has to offer. The amazing beauty and our history of who we are and who we hope to become.

El Morro National Monument is always looking for volunteers. Volunteers staff the desk, walk the trails and give interpretive talks. Additionally, if you have a specialized skill set and have a project you’d like to help the park with, feel free to give them a call.

At El Morro, volunteers help with database management, artistic renderings of events, and junior ranger programming. Whether your background is in art, technology or education, the park service can put it to use. 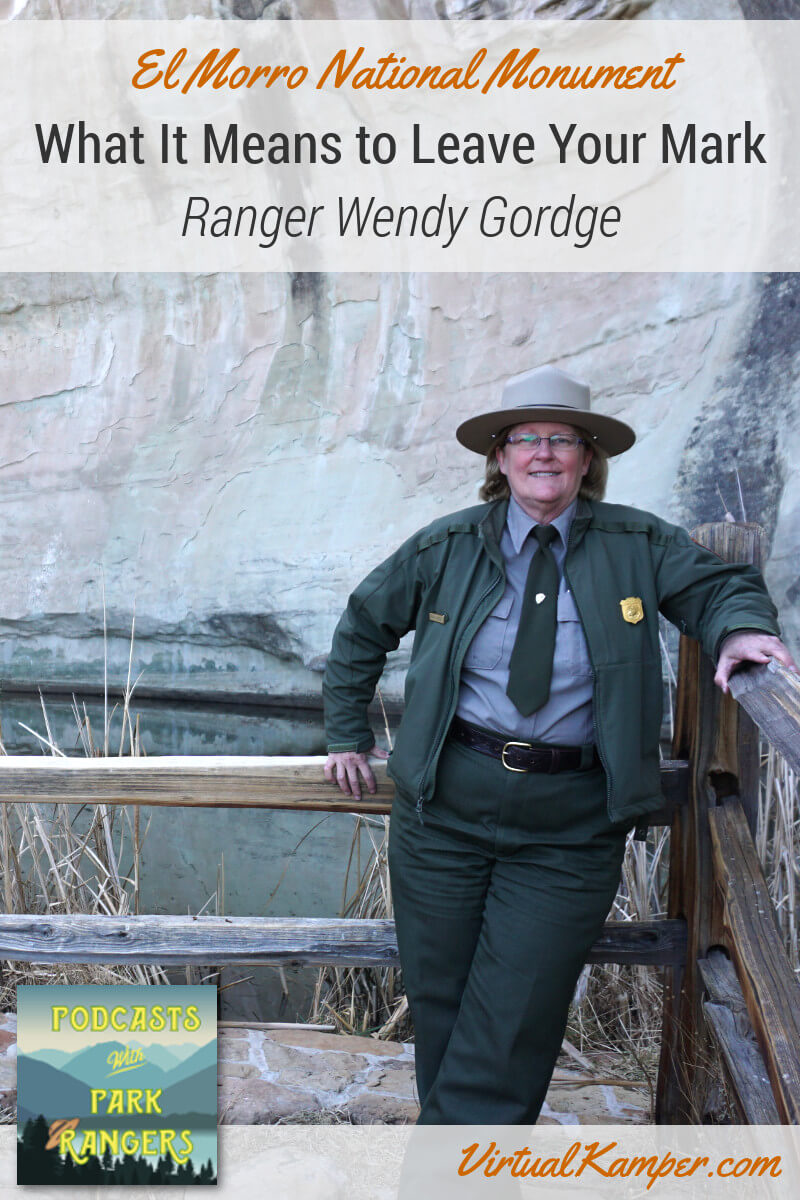 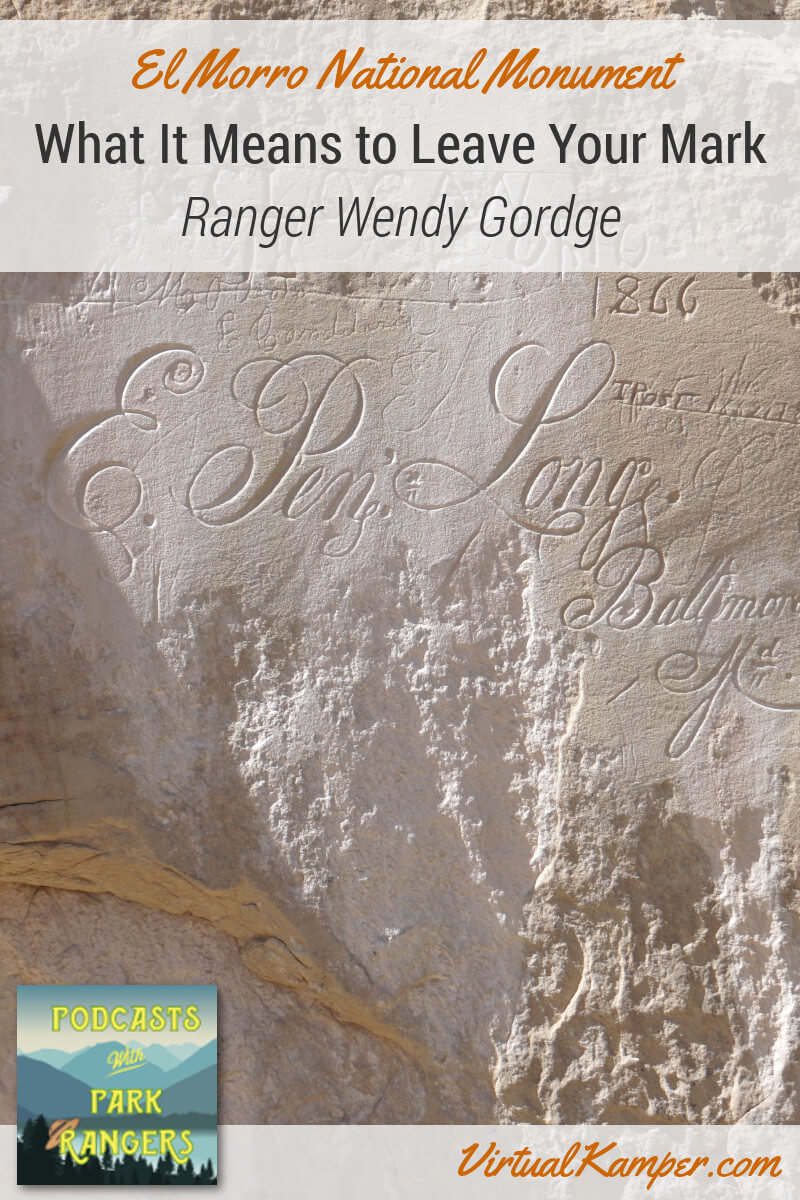