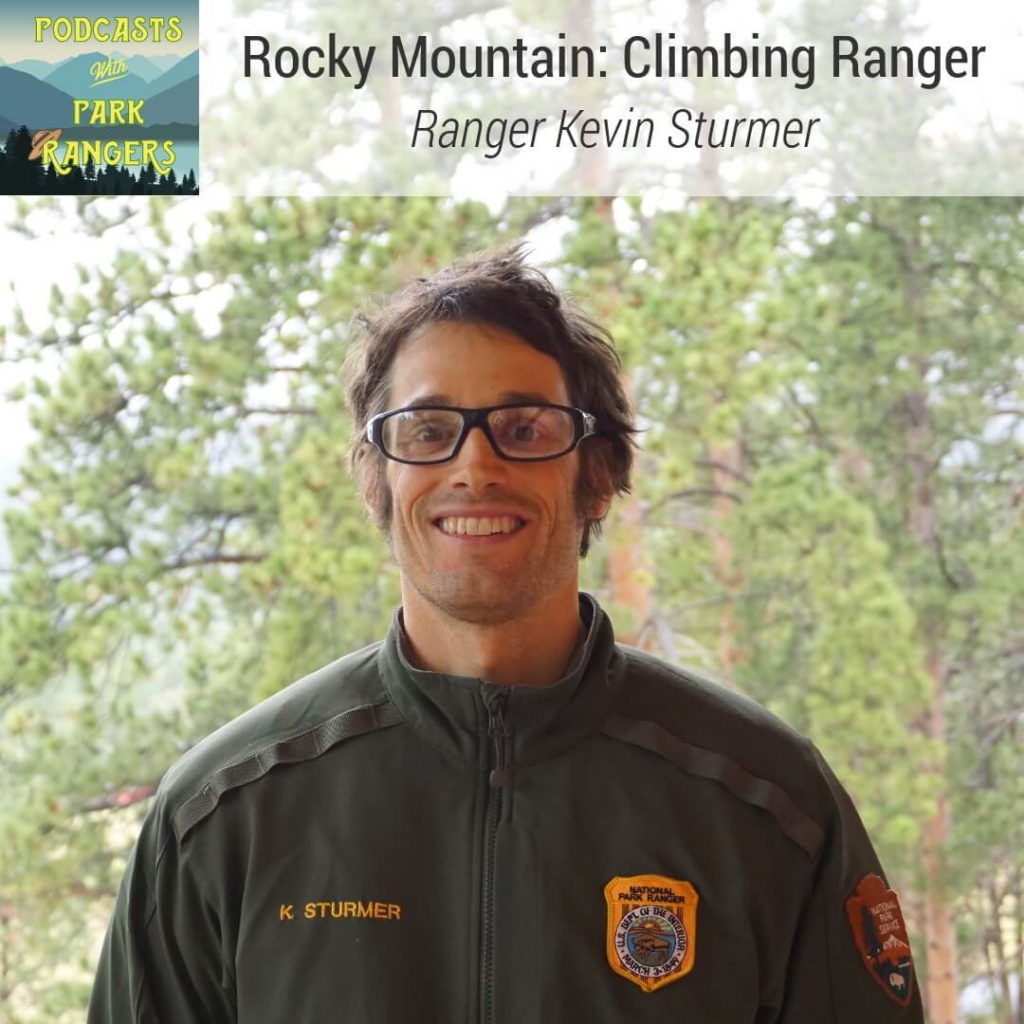 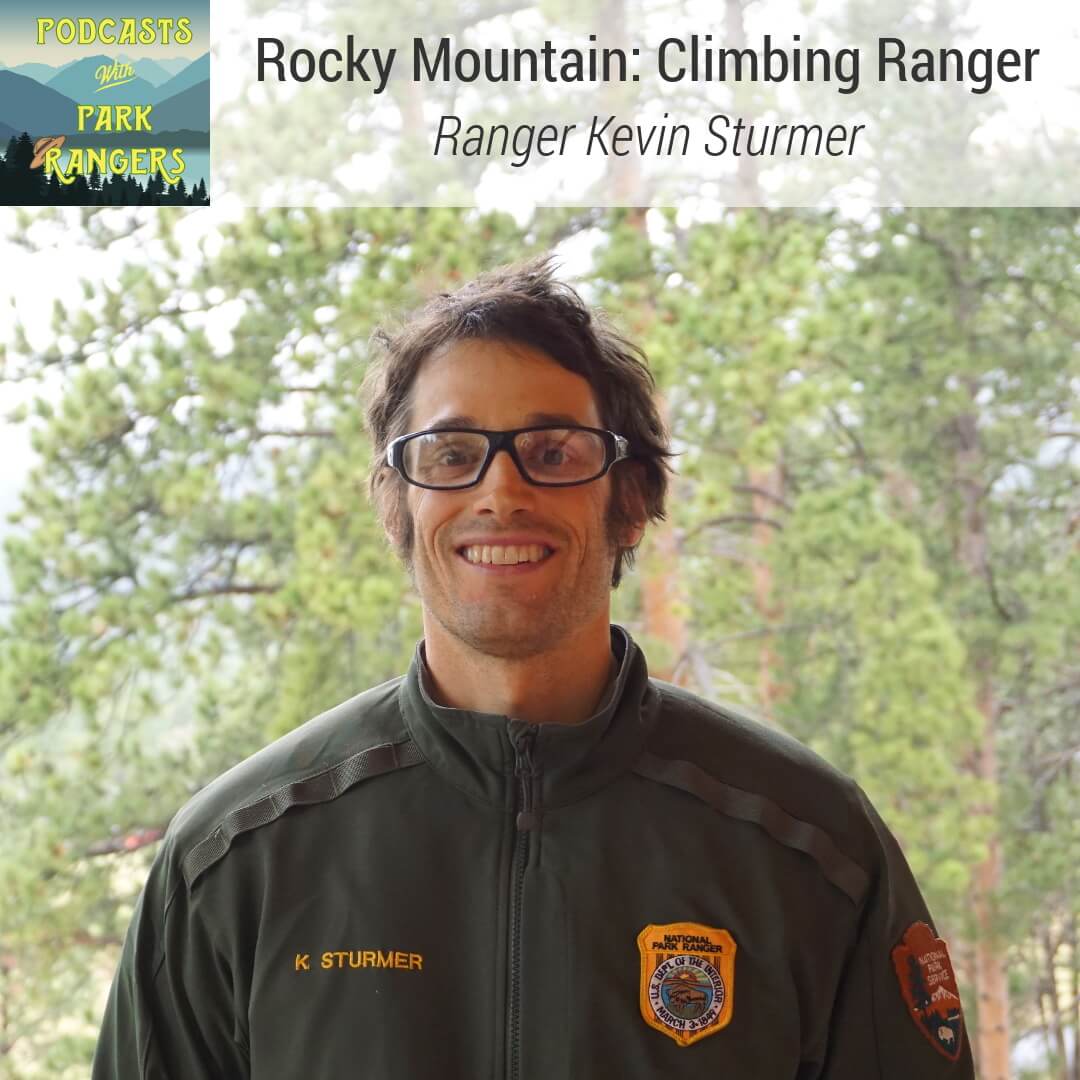 Let’s explore what life as a climbing ranger at one of the premier parks for mountain climbing in the world, Rocky Mountain National Park. We discuss what climbing is like, search and rescue, and the famous Longs Peak on this episode of Podcasts with Park Rangers.

Kevin Sturmer was a climber before he even knew what climbing rangers were. After college, he moved to Colorado and loves the state for its climbing and skiing. He was also a river guide for a while and met his wife this way.

Climbing is his favorite thing to do, and because the hobby puts you in remote places, it’s difficult to get help if you get hurt. Many of his friends were EMTs, and he decided to do the same and became a paramedic.

Kevin found out about being a climbing ranger through a good friend also had the job. He wasn’t exactly sure what he was getting himself into, but he got lucky being able to combine his passion with his medical training.

How Kevin Got Into Climbing

Kevin grew up in New York and went to school in Massachusetts. And though he dabbled with climbing a bit in college, it wasn’t until moving to Colorado that he got bit by the climbing bug.

Typical Day For A Climbing Ranger

Most of the job requires rangers to be out in the backcountry. In the winter there’s ski patrol, and in the summer hiking and climbing. Climbing Rangers talk with climbers while they’re in the park, and answer questions.

Additionally, they do search and rescue. To do that, they must know every inch of the park. So, that’s why they’re found out on the trails so much. This familiarity with the park also allows them to verbally guide lost visitors back to safety over the phone.

They teach visitors about Leave No Trace and resource protection. Because climbing, like any other activity, leaves an imprint on the park. So they must educate visitors on how to leave the least amount of impact possible.

When there’s an emergency, they must participate in search and rescue. All Rangers at Rocky are trained to do search and rescue, which is very unique to the park. They aid in emergencies as simple as a sprained ankle or altitude sickness to someone dying in the backcountry.

Per Ranger Kevin, climbing is AWESOME! Rocky Mountain National Park has a lot of technical climbing in 5th class terrain.

Climbing terrain is divided up into 5 different classes:

Climbers go up a wall by placing a nut into the wall and then put the rope on the nut with other equipment. The rope will keep you from falling.

At what point is rope necessary?

However, it’s up to the individual. The majority of people will use a rope in lower 5th class terrain.

The fifth class terrain is further subdivided into levels.

A decimal system is used, so many fifth class climbs are indicated with 5, followed by a decimal number. (e.g. 5.1) The second number indicates the difficulty of the route from 1-15.

Bouldering is a different type of climbing that has gained popularity. All you need is a pad to fall on, and no other gear is necessary. People climb on boulders close to the ground using their hands and feet.

In Rocky Mountain National Park, there’s a high concentration of alpine bouldering, which is rare. Consequently, people come to the park from all over the world to do bouldering.

How Much Is Actual Climbing Done On The Job?

Seasonal climbing rangers should be out every day, and there is always someone on Longs Peak. They get tons of people on Longs, especially on the keyhole route.

Longs Peak is considered one of the most amazing and difficult 14ers in Colorado. There are times if you slipped and fell, you could fall over 1500 feet.

Additionally, one or two groups are usually on technical climbing patrol, and one ranger on bouldering patrol.

He loves his crew, they’re the fittest and most psyched group of people he’s been around. And they’re a tough bunch to keep up with.

Seasonality of Rocky Mountain National Park as a Climbing Ranger

Summer season is full throttle every day with so many people in the park. There could be multiple rescues a day, or on calmer days they’re on climbing patrols in far off places.

The threat of afternoon thunderstorms is a daily issue, and Ranger Kevin spends a lot of time running from lightning. Visitors stop and ask if they should get to lower elevations, and while he never outright suggests they should, he always says that he’s definitely going down.

In the winter, there’s ski patrol duty. They also do a snow survey for the USGS once a month. Winter is typically a time to catch their breath, but every winter it seems they’re becoming busier!

The search and rescue load comes down in the winter, but when they do get a call it can be nerve-wracking. Things can get bad quickly in the winter.

Ranger Kevin says Longs Peak is amazing! It’s a massive “chunk of rock”, it’s strenuous to hike or climb. There are shorter hikes on Longs Peak to Chasm Lake or Peacock Pool.

On the summit, the weather changes by the minute. It can be sunny, and then the next minute it’s snowing with 60 mph winds.

The most popular route is the Keyhole, a 15 mile round trip to the summit. The last mile is the most technical, and visitors hike through a feature called the keyhole. They go from the east side of the mountain to the west side by climbing through a slot.

The last climb turns east again up to the summit via the homestretch. So, you hike 2/3 of the mountain to get to the summit.

On busy holiday weekends, it’s not uncommon to see 4-500 people on Longs Peak. However, midweek can be a bit quieter. There are thousands of ways to summit the mountain: ski, walk, hike, run, multi-peak adventures, and climbing 3rd-5th class terrain.

Some of the best climbing routes go up the diamond — the east face of Longs Peak. It’s an extremely technical 5th class climb.

Climbing Rangers do overnights on Longs Peak to do preventive Search and Rescue. Additionally, they talk to people enjoying the park and educate them on how to take care of the resource and stay safe.

Rangers stay overnight in the chasm shelter near the peak, and the team takes turns. In the morning, they’ll climb one of the routes to the peak to get a look at the conditions.

The shelter has saved Kevin a few times from storms, or to help someone really sick on the trail. People are pretty curious about the shelter, so they’ll invite people in to have a look around or get them out of the rain.

Other Climbs at Rocky

Lumpy ridge has granite crack climbing, and in the alpine, there is glacier gorge and spearhead. People also get out into the mummy range at Ypsilon.

There’s easily a lifetime worth of rock climbing at Rocky with lots of variety. Everything from steep face climbing to slabby featureless rock climbs.

Why Kevin Combined His Passion and His Career

Has it changed the way Ranger Kevin thinks about his hobby? It has changed it, and it’s different now.

While being a paramedic was OK, he didn’t want to do that full time. However, it’s nice to do that a small portion of the day. So when this job came up, it was the perfect amount of EMT work and he also goes climbing.

Kevin hates doing EMT work in the mountains but also gets to work on the ambulance in Estes Park. The ambulance work keeps his clinical emergency medicine skills sharp.

Emergency services take a toll, and it’s a tough life with long hours in a typical paramedic position. To be able to still use those skills, but have a different lifestyle is great!

Favorite Thing About Being a Climbing Ranger?

The staff at Rocky is amazing to work with, from the folks that work in facilities to the protection rangers, he gets along with everyone.

However, his favorite thing about being a climbing ranger is the hardest part of the job. He gets to help people all the time. Sometimes, it’s on the worst day of their life. And, he would love to meet them in any other context.

On the days he doesn’t do search and rescue, he gets to interact with people having the best day of their life!

He’s learned so much from all of the crew and feels it is a privilege to work with them.

Ranger Kevin likes that he can wake up in the morning, put on his ski boots, and go ski. Then, come back and grab climbing gear for a climb in the afternoon. You could do bouldering, ice climbing and a trail run all in the same day.

It’s amazing the multitude of recreation options. You could start the day in ski clothes, and end up in shorts and a t-shirt by the end of the day.

Kevin has had so many personal experiences in Rocky. He’s been on Longs Peak countless times, and even now he can’t walk up the trail without stopping, looking up at the diamond, and taking it all in.

No matter how many days he’s out in the park, it always stops him in his tracks.

Wild places to go be by yourself are becoming fewer and fewer. It’s a conundrum, we want wild quiet places, but by going out in them they’re not as wild and quiet as they were before. The NPS protects the wild places, and it’s a slippery slope.

But, without the wild open spaces, we’d all go nuts!

Outdoor recreation is so popular now, and the parks are keeping those wild places wild. The park service has a really hard job, and he hopes to keep doing what he’s doing to contribute.

All of our public lands are in search of volunteers. Whether it’s with the Bureau of Land Management, the US Forest Service or the National Park Service which includes Rocky Mountain National Park, there’s probably a volunteer opportunity in your area. Find out more information by visiting Volunteer.gov.