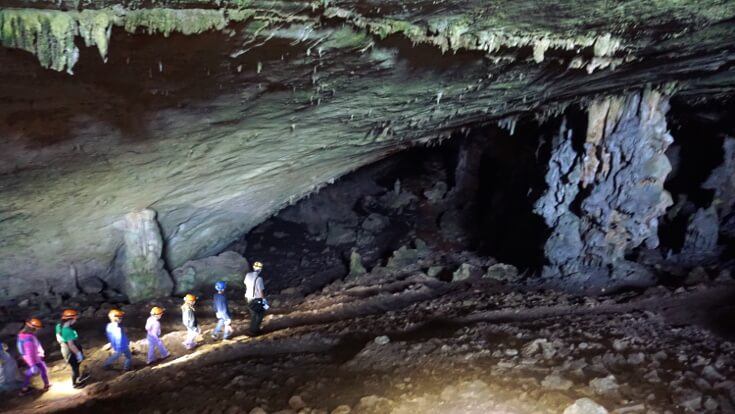 04 AprConquer Your Fear Of The Dark At Carlsbad Caverns

A look at Carlsbad Caverns tours, and what it’s like to explore the caves.


What’s it like to not be able to see your own hand in front of your face? Waving your hand frantically in front of you… it’s pitch black, you know it’s there, but you can’t see it!

Maybe you feel calm as the darkness envelops you. Or maybe, you feel a bit panicked. You grab at something familiar to reassure yourself that it’s all ok. Because in a few moments, the lights will be turned back on!

750 feet underground in the New Mexico desert, you can take one of the Carlsbad Caverns tours led by a ranger and experience complete darkness. Or, if you’re afraid of the dark, you can take a self-guided tour of the Caverns where you can see fantastical formations lit beautifully for all to see.

The Descent Into Carlsbad Caverns

To start the self-guided tour, you must first make a decision on how to get down to the Big Room — the main chamber — of Carlsbad Caverns:

If you’re able, we recommend hiking through the Natural Entrance. 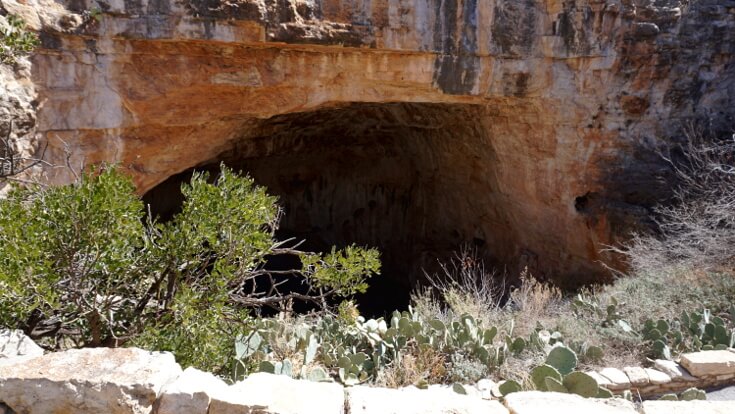 The journey downward is quite the experience. First, you might see the cave swallows right at the entrance. They sing their song as you wind down a steep walk in the mouth of the cave. Take a moment to see if you find them, they nest right at the top in small holes of the roof of the cave.

The descent into the cave.

From there, you wind your way down deeper. The light is sparse. At times it’s hard to tell where the black asphalt path is beneath you because you’re eyes haven’t quite adjusted to the lighting of the cave.

The chilly mid 50s temperature and high humidity surround you, and you’ll want to have a jacket to fend off the chill.

And Then, There Were Cave Decorations 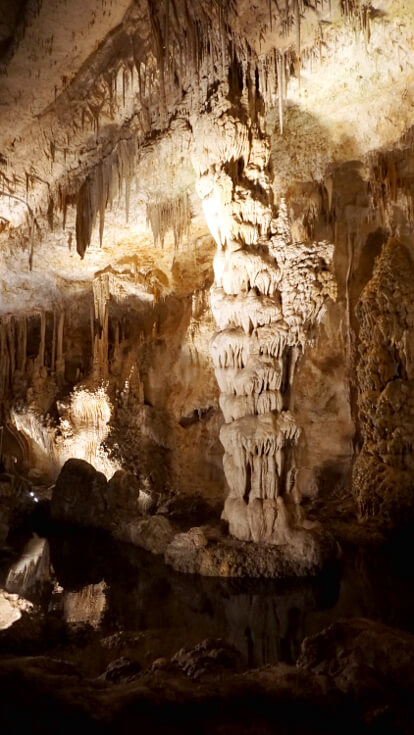 Then, you start to see the white, red and yellow stone. Some of it might look a bit like melted ice cream as the water drips down the face of the structures. You enter a world of wonder and amazement. This is why you came to the caverns — to see the otherworldly formations.

You’ll feel like a kid again as you stare at these huge structures that took thousands of years to form, one drip at a time. You might see shapes of animals, or ghastly images. Stalagmites, Stalactites, Columns, Draperies, and Popcorn… all these formations come together to create the landscape in front of you. 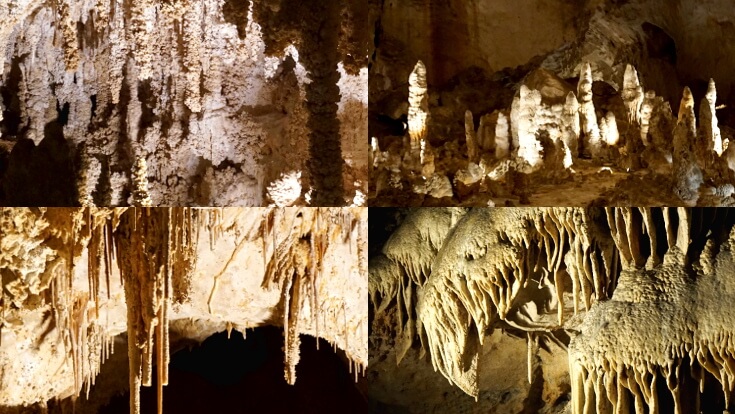 Sometimes your eyes play tricks on you in the dark and you think you see people ahead of when it is really just a formation. But, you persevere, because the wonder of exploration has become greater than your fear of the darkness.

After the descent from the natural entrance, you’ll come to the crossroads of the big room. You can either return to the surface via elevator (because ain’t nobody want to hike out), or you can venture into the Big Room. 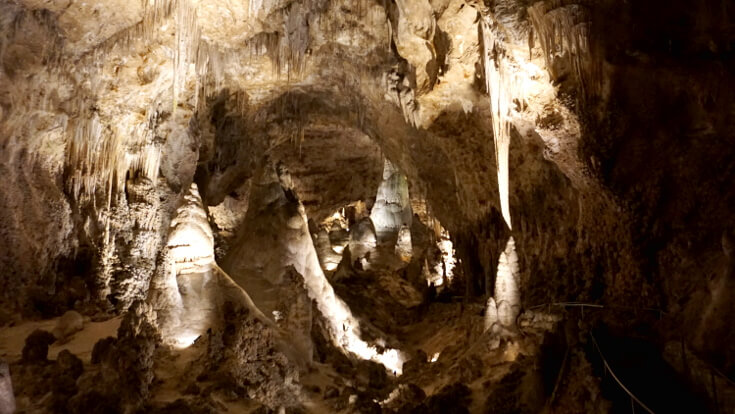 Side Note: Your ticket will allow you to come back over the next three days in case you’re super tired. And, you can take the elevator down the next time if you don’t want to walk down the Natural Entrance again.

Venture down the path, and the cave formations you saw in the natural entrance will pale in comparison.

The Big Room is the largest cave chamber in the United States. A whole six and a half football fields will fit in it. Some of the formations are nearly 3 stories tall and don’t even come close to touching the ceiling. 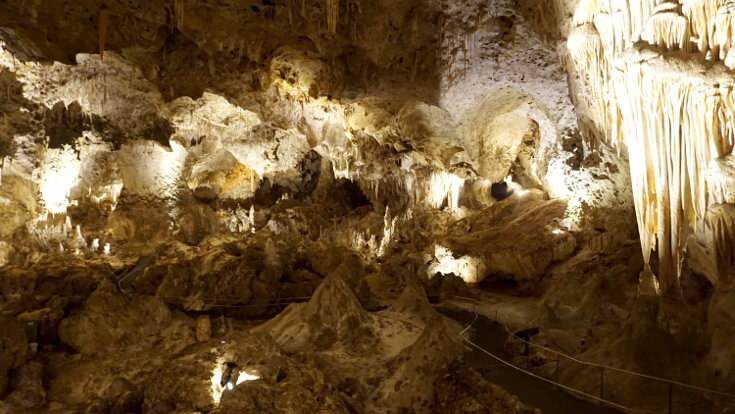 Another Perspective of the Big Room.

As you stare in amazement, you forget that fear of the dark and discover why people have been exploring this cave for over 100 years.

Quenching Your Thirst For More Adventure

After the tour of the Big Room, perhaps you’ve decided you want more. Exploring the cave has been fun so far. Maybe you want to see some bigger formations or experience what it is like to explore a natural cave without the nice footpath and lighting.

On all the Carlsbad Caverns tours, one thing is guaranteed: you’ll get to experience complete darkness in the cave. When the lights go out on the tour, try waving your hand in front of your face. Some panic might set in but just take a few deep breaths. The Park Ranger will turn the lights back on shortly.

So if you’re brave enough, we recommend signing up for a tour on Recreation.gov. However, we want to give you a brief overview of what to expect.

King’s Palace: This tour starts just before the Big Room, but along the Natural Entrance route. It’s the easiest of all the tours and has paved trails. There’s a reason it’s called the King’s Palace, and it’s because the formations on this tour are HUGE!

Left Hand Tunnel: Everyone gets a lantern as they explore this natural cave like the original explorers of Carlsbad Caverns. So, no more paved paths — other than some slippery and steep spots, this tour is of moderate difficulty. The cave formations aren’t nearly as big as those in the King’s Palace, but the experience is something completely different.

Lower Cave: This tour is not for the faint of heart. You’ll lower yourself down a slippery slope with a knotted rope, and descend down 50 feet of ladders to the lowest publicly accessible part of Carlsbad Cavern. You’ll be rewarded with adventure and sights very few in the park get to see! Gloves and headlamps are provided. Just be sure you don’t forget 4 AA batteries to power your lamp. This tour is not offered in the winter.

Slaughter Canyon Cave: While the tour in Slaughter Canyon itself is easy, the hike up is HARD. You start with a ¾ mile hike up the side of a mountain. Expect the hike to take 30-45 minutes. Then, the ranger guides you through Slaughter Canyon Cave to see some of the biggest and scariest formations in the park. Again, gloves and headlamp are provided but don’t forget the 4 AA batteries. This tour is not offered in the winter.

Sidenote: With all tours, we do want to remind you to buy tickets early! Especially in the summer. We recommend reserving your tickets 1-2 months in advance.

Are You Still Afraid of the Dark?

I hope we didn’t scare you off of exploring Carlsbad Caverns National Park. It’s unlike any other National Park we have ever visited. It is dark, and spooky at times, but there is a bit of something for every level of adventure. 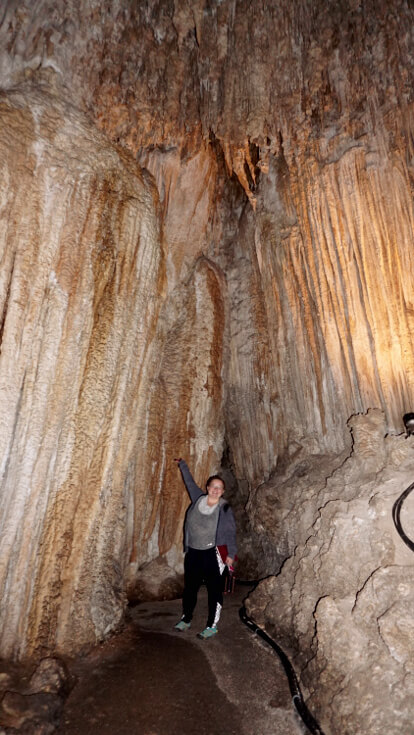 Sarah posing with large draperies on the King’s Palace tour.

Hopefully, that fear of the dark will fuel your excitement to explore the caverns and see a world beneath our feet that you didn’t know existed.

Have you visited Carlsbad Caverns? What did you love about it? Let us know in the comments!

Recommended Visit: 2-4 Days – Depending on availability of tickets for ranger-led tours.
Things to Do: Hiking (both underground and outside), Audio Tour, Evening Bat Flights, Ranger Talks, and Ranger-led tours
Location: Visitor’s Center Address — 727 Carlsbad Cavern Hwy, Carlsbad, NM 88220
Camping Availability: Not in the park, but there are RV Parks, Brantley Lake State Park, and free-camping on BLM land around the park. 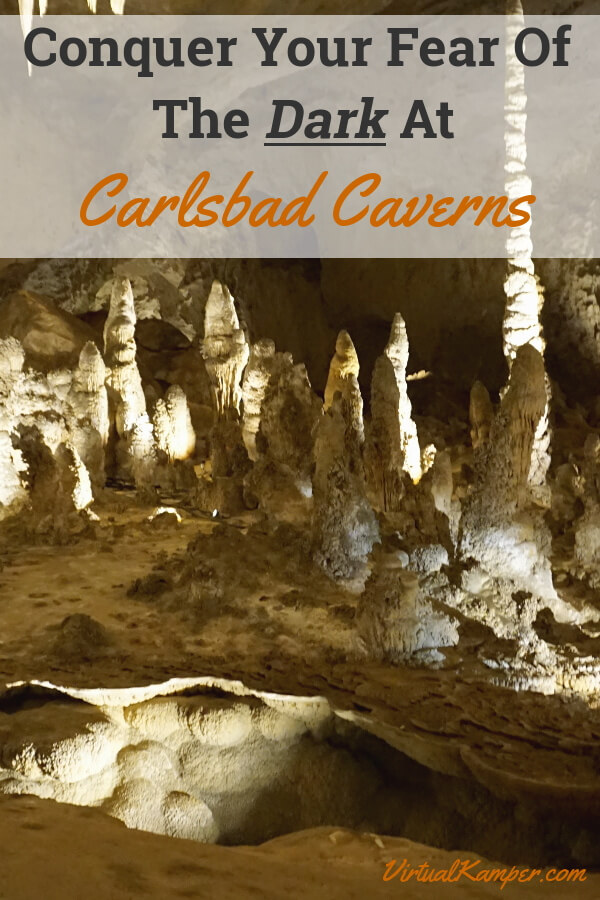