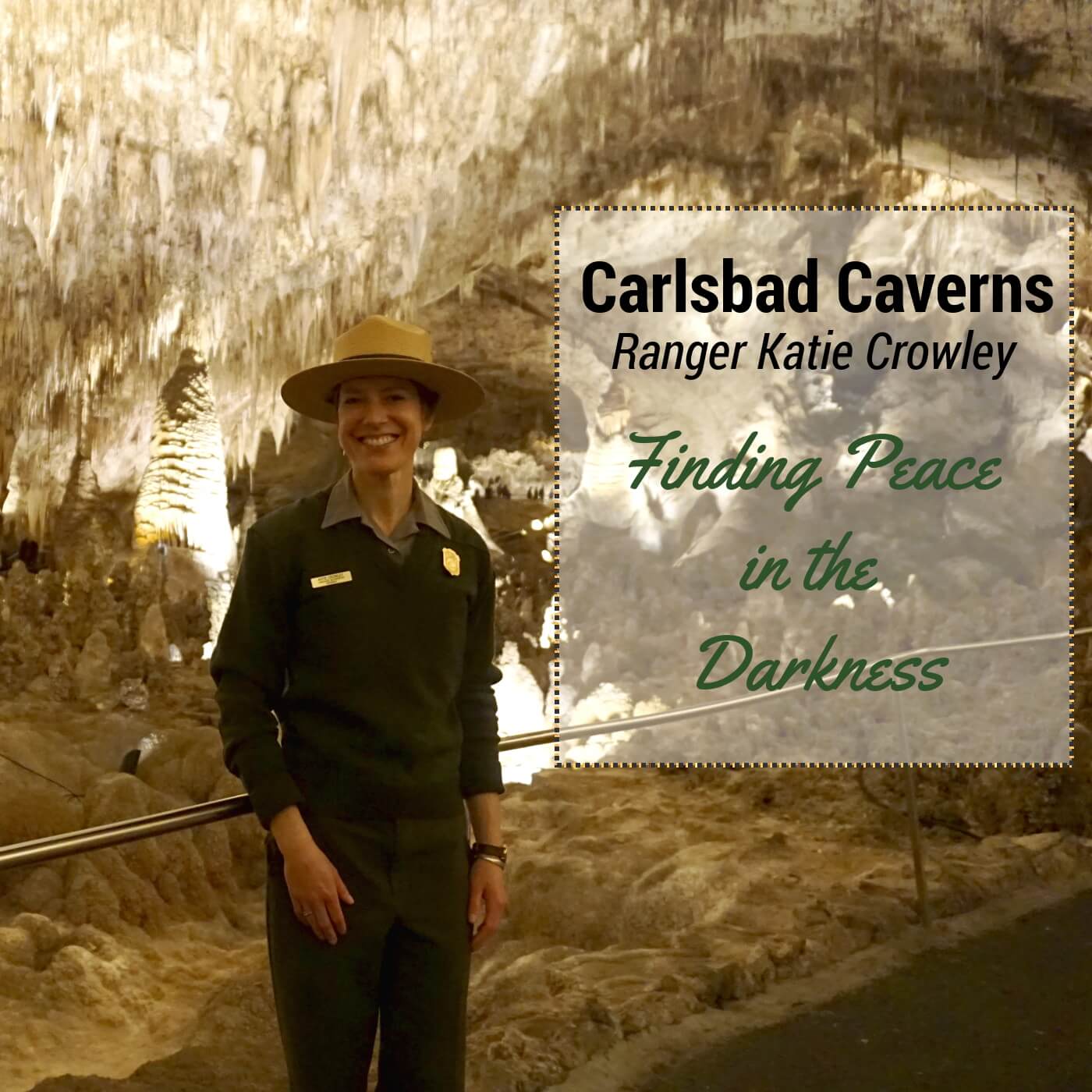 What’s it like to be a Park Ranger at one of the biggest caves in the US? Let’s explore the other-worldliness of Carlsbad Caverns National Park with Interpretive Park Ranger Katie Crowley to find out. She leads cave tours, helps answer visitor questions, and writes poetry about the sites she sees every day.

Ranger Katie grew up in Washington state, and the National Parks played an important part in her life as a kid. In the summers, her family often traveled to Mount Rainier.

She always wanted to be a teacher but felt the need to incorporate an outdoors element to teaching. So, she decided to take a position in environmental education at North Cascades National Park 9 years ago.

Let’s take a journey into the caves: A hike from the surface via the Natural Entrance brings you 750 feet under the surface. The walk deep beneath the surface gets darker and darker; the natural light fades, and your eyes take time to adjust to a new normal of dimly lit paved paths.

The ceilings are hundreds of feet above your head, so the acoustics allow you to hear people on the other side of the cavern you can’t even see! For that reason, people are asked to whisper in the caves.

The journey culminates in the Big Room, the largest cave chamber in the United States. In every direction, there are stalagmites, stalactites, and delicate soda straws to marvel at and explore.

The Discovery of Carlsbad Caverns

Native Americans have called the Chihuahuan Desert around the cave home for 12,000 years. We know this because there are mezcal roasting pits outside the cave where the Native American would roast agave (a plant similar to an artichoke).

As far as we can tell, there’s no evidence they went far into the caves, but there’s plenty of evidence of them around the entrance of the cavern.

Around the turn of the 19th century, Jim White, a local ranch hand, became the first documented European-American discoverer of the cave. He saw what he thought was a giant cloud of smoke from a wildfire. Upon investigation, he discovered it wasn’t smoke but rather a cloud of bats flying out of the mouth of Carlsbad Caverns.

He fashioned a ladder made of sticks and wire to go down into the cave and explore, and only by lantern light!

Jim White named many of the formations in the cave. Due in part to his efforts to share his discovery with so many others, the caverns became a protected landmark.

How Are The Cave Formations Formed?

Two primary acids work to create Carlsbad Caverns as we know it today:

During the Pangaea era of Earth: the cavern used to be part of the Capitan Reef — an ocean reef with sponges and other sea life. Over time, the reef fossilized into limestone and continental movements positioned the fossilized reef near the surface of the Chihuahuan Desert while the Guadalupe mountains formed.

Sulfuric Acid – with its origins still debated – then ate away the limestone in the reef to form the cave portion of Carlsbad Caverns (along with hundreds of other smaller caves in the region).

Carbonic acid creates the cave formations, also known as speleothems. Water from the surface picks up carbonic acid from carbon dioxide in the atmosphere. As the water seeps into limestone cracks from the old reef… the acid dissolves the limestone and redeposits it in the cave as calcium carbonate (calcite).

When the calcite drips on the ground, it forms stalagmites. If the water evaporates quickly and the calcite stays on the ceiling, you get stalactites and soda straws.

If the calcite drips on you while in the cave, don’t worry — it’s akin to a mild soda water, so you’re safe!

Human Impact on the Cave Formations

Sometimes, people touch the cave formations, and this can cause irreparable damage. The oil on our skin waterproofs the formations and they’ll no longer grow.

As a visitor, the simplest way you can keep the Caverns around for future generations is by not touching the formations.

How Long Do The Formations Take To Grow?

Water from the surface takes about 15-30 years to reach the cave — 750 feet underground. And with only 12” of rain a year, you can imagine it’s a slow process.

As an example, let’s look at an 80-year-old tunnel the Park Service blasted out to the King’s Palace. The formations in that tunnel have only grown ¼ and ½ inch long. Nearly a human lifespan to form such a small amount!

Can you imagine how long it would take some of the 20-30 foot tall formations to grow?

The NPS continuously innovates new ways to conserve the caves for future visitors to enjoy.

In recent history, a parking lot was located near the Natural Entrance of the cave. On rainy days, contaminants from cars would wash into the cave. They have since moved the parking lot to reduce the number of pollutants in the cave’s ecosystem.

Additionally, the NPS changed the lighting system from incandescents to LEDs. This change has two benefits: energy efficiency and reduction of algae growth.

Algae doesn’t grow in a cave, but certain wavelengths of light cause algae to flourish underground. The NPS continues to study what wavelengths reduce the number of algae in the cave and will take the results into consideration going forward.

Animals in the Caves

The bats are one of the main attractions of Carlsbad Caverns. A bat flight program in the summers allows people to watch the bats leave the cave at dusk as they go to hunt insects.

Another notable animal you’ll see from spring to fall are the Cave Swallows. About 2,000 to 3,000 Cave Swallows live in the mouth of the cave. You’ll see them the most active in mornings and evenings when you can hear their cave song.

Ranger Katie’s Love for Carlsbad Caverns and the NPS

“I think deep down, it’s all about appreciation, that we have places like this – that are a little wilder than our own backyards.” – Ranger Katie on the National Parks

“We have the opportunity to learn from [these places] and to explore and to just really… take a step back and be. In the present moment.” – Ranger Katie on the National Parks

“I really appreciate the darkness… When you turn out those lights, and you sit in the silence and the darkness — it’s unlike anything else you’ve ever experienced. It’s really true peacefulness.” – Ranger Katie on Carlsbad Caverns

You can volunteer to help at Carlsbad Caverns with the Cave Swallow Band Project — the longest running bird banding project in the country.

Started in 1982, the project attempted to figure out where the birds went to winter. Now, they also determine longevity, sex ratios, number of young, food habits and more.

If you’d like to volunteer, check with the Visitor Center for more information. 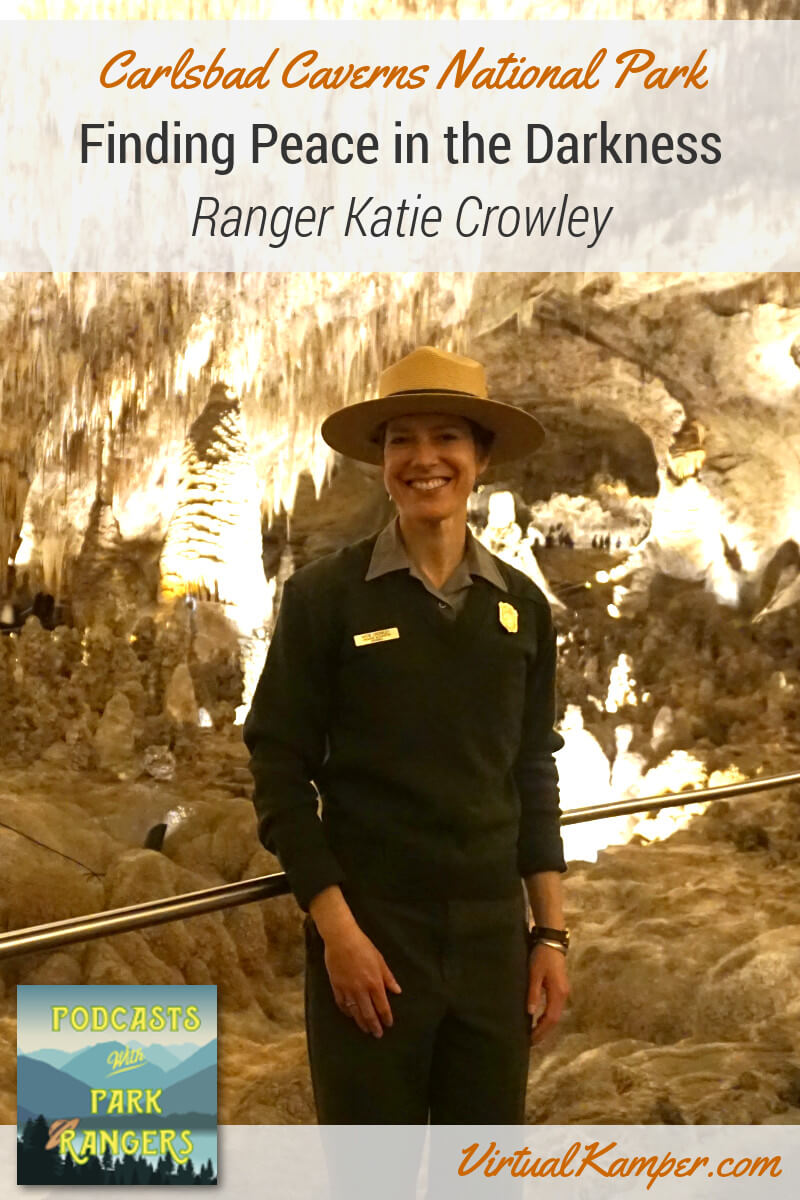 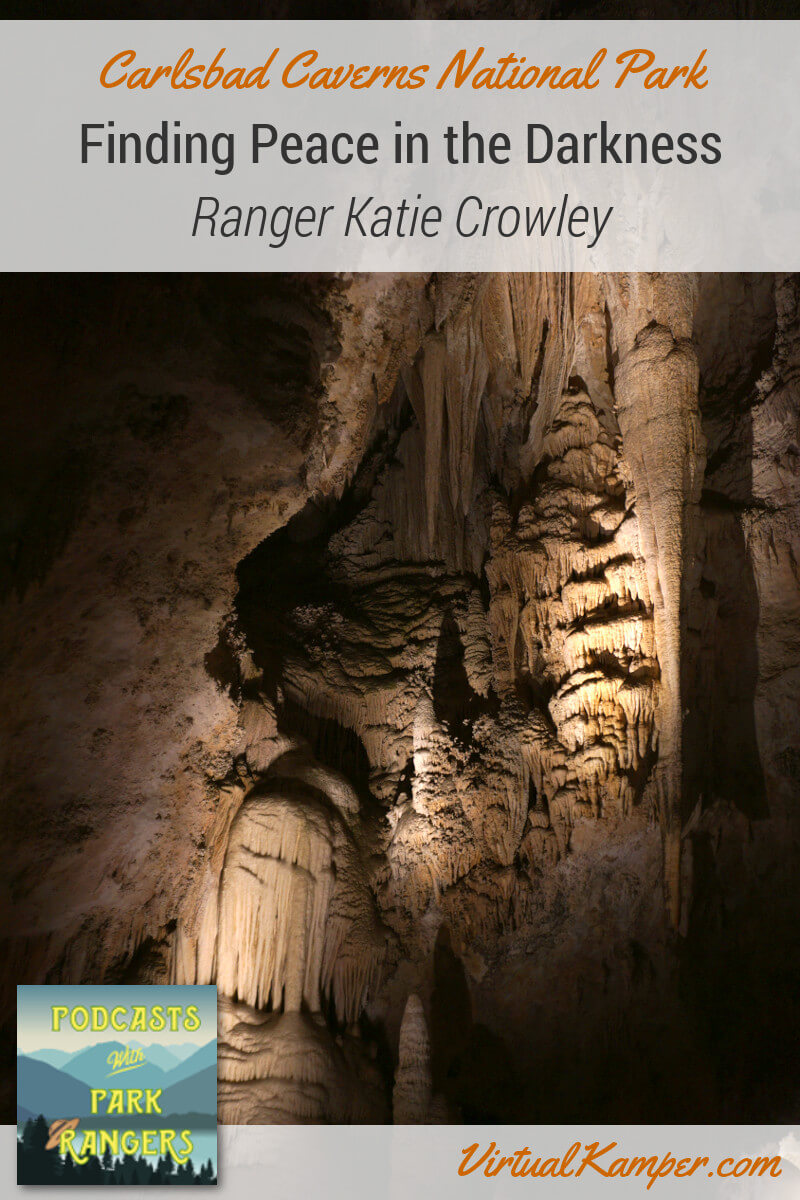