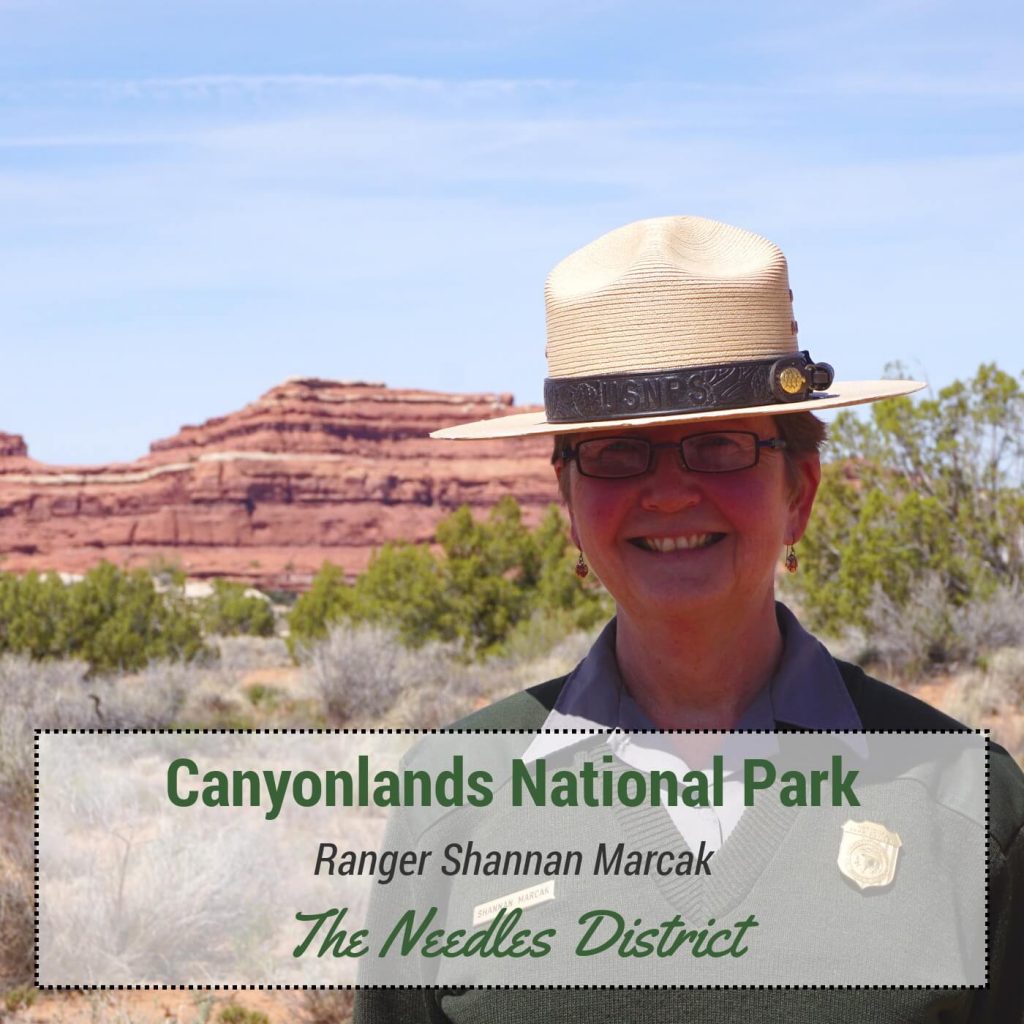 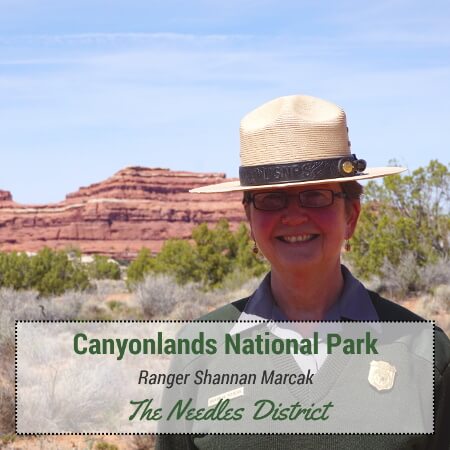 The red rock canyons of Utah are some of the most iconic landscapes in the National Park System. In the Needles district of Canyonlands National Park, red and orange sandstone spires create a dramatic landscape remote from the luxuries of society. The silence and darkness are a stark contrast to the urban environments most of us are used to today.

On this episode of Podcasts with Park Rangers we explore the purpose of interpretive park rangers, cowboys in the desert, and what life is like as a Ranger living in the Canyonlands.

Ranger Shannan Marcak has been the lead interpretive park ranger at the Canyonlands Needles district for 5 years, and with the NPS since 2000. However, she’s been working in National Parks since 1988 when she worked in hotels at Yellowstone.

Working in hospitality, she only served part of the park’s mission: the enjoyment of the people. She also wanted to protect the places she worked, and thus became a park ranger. That delicate balance between enjoyment and protection is what she strives for in her work today.

The moment she knew she wanted to become a park ranger was in a temporary position in Yellowstone when she gave a talk called “Geology Rocks”. A kid and his grandfather attended the talk, and the kiddo said that while his grandpa forced him into attending the talk, he found that geology really does rock! That kind of connection with kids is something Shannan still seeks in her interpretive talks today.

With a world of people becoming more disconnected from natural landscapes as new technologies emerge, interpretive rangers have been asked to step up. The way we communicate has changed, and thus how we connect with the environment must change as well.

Sometimes people have a hard time understanding what’s special about a natural landscape. Or, at cultural and historic sites, people might not connect with the history. The job of an interpretive ranger is to interpret the places or history of the park they’re located, and frame it in a context their audience understands.

One quote stands out to Shannan that speaks to the job of the interpretive ranger:

The position has transitioned from less speaking to more of a connection role. Because, if people care in an emotional way about a place, they will care for that place in real ways.

The Canyonlands are geographically located on the Colorado Plateau, in an almost desert landscape. However, the heart of the park is at the confluence of the Green and Colorado Rivers.

It has four districts:

There are unique geological red rock colors and layers, stacked almost like a layer cake. The horizontal layers are quite flat, which is a rare find in geology.

What Draws People to Canyonlands?

It’s something different than what most people find in their daily lives. Going from humid and green to blinding red and orange colors. There’s beauty to be found in the cragginess.

Additionally, wild places are getting harder to find. Even the remote Needles district has seen an increase in visitation over the past decade, and it isn’t quite as wild as it used to be. But, to others, the Needles is still quite a wild landscape when compared to that of an urban environment.

However, in the backcountry of Canyonlands National Park, it’s easy to find solitude and not see another soul for days.

Canyonlands has so many different kinds of recreation: hiking, biking, camping off-roading, horseback riding, rafting, etc. To manage all of these activities, the park has become more intentional and hands-on with visitors.

They’ve designated backcountry campsites so campers aren’t close together, and to protect the park itself.

Educational efforts were increased to educate visitors about biological soil crust, aka crypto. Crypto is a community of organisms that hold the sand in place. Plants thrive off of this soil crust because it holds water like a sponge and fixes nitrogen for the plants to eat.

However, the crypto is very fragile and susceptible to crush damage like tires or footsteps. Once crushed, sand no longer stays in place and moves to the San Juan Mountains via the wind. Because of the sand on the snow, it causes the ice pack to melt earlier. Something as small as stepping on the wrong piece of soil in the park impacts the environment beyond the park boundary.

About the Needles District

The Needles District gets its name from jagged peaks and red spires in the park. They look a bit like possum teeth. The cowboys who inhabited the area named it the Needles.

How are the Needles Formed?

Below the Needles region, there is a thick layer of salt called the paradox formation. This layer moves, almost like a toothpaste.

On top of the salt are brittle layers of sandstone, and when the salt moves it causes the sandstone to fracture. The movement is in two directions, perpendicular to each other, to form square blocks that erode to create needle-like formations.

Unique Aspects of Being a Ranger In Canyonlands National Park

Ranger Shannan lives in the remote Needles district of Canyonlands. It’s 1 ½ hrs from full-service anything and has no cellular service. She doesn’t even have a cell phone, but rather a TracFone since 80% of her time is spent with no cell coverage.

The extraordinary night skies and silence are something she values now. The milky way can often be seen before the sky is completely dark!

Visitors usually come to the Needles expecting cool landscapes, but don’t realize there is a cultural landscape there too. There’s evidence all over in SE Utah and the 4-corners region that people have been living there for a very long time with the benefit of resources.

Evidence of people in the area goes back 10k-12k years ago. The hunters and gatherers killed mammoths for food.

Gradually they moved into farm experiments and then farming exclusively. Also, the people domesticated livestock and raised turkeys for the past couple hundred years.

The Cave Spring Trail is evidence of the cultural history: there’s a cowboy camp, the old park headquarters, and petroglyphs from the ancestral Puebloan and another time period.

Ranger Shannan discovered she first loved the outdoors when she worked in a hotel in Yellowstone. And, when she worked in Carlsbad, found she loved caving too. Through park experiences, she’s learned so much about herself. She encourages visitors not just explore the place, but explore you!

To protect and manage these extraordinarily important natural and cultural places is important to Shannan. America is a diverse culture, and Americans are just as diverse as the cultural histories.

The National Parks try to represent a broad range of what we value. Natural parks are giving more opportunities for hard to find resources like darkness, aloneness, silence. It’s also of value to us as a species for health.

Also, people naturally want to build their cultural history. The NPS helps define our heritage address the need to develop who we are as a community.

The student conservation association, or SCA, is a non-profit organization building the next generation of conservation leaders. As part of the SCA, students can volunteer at Canyonlands as well as several other of the top most visited National Park sites. 70% of SCA alumni go on to careers that actively create a more sustainable environment. In fact, several of the rangers we’ve interviewed on this show began their careers in the student conservation association.