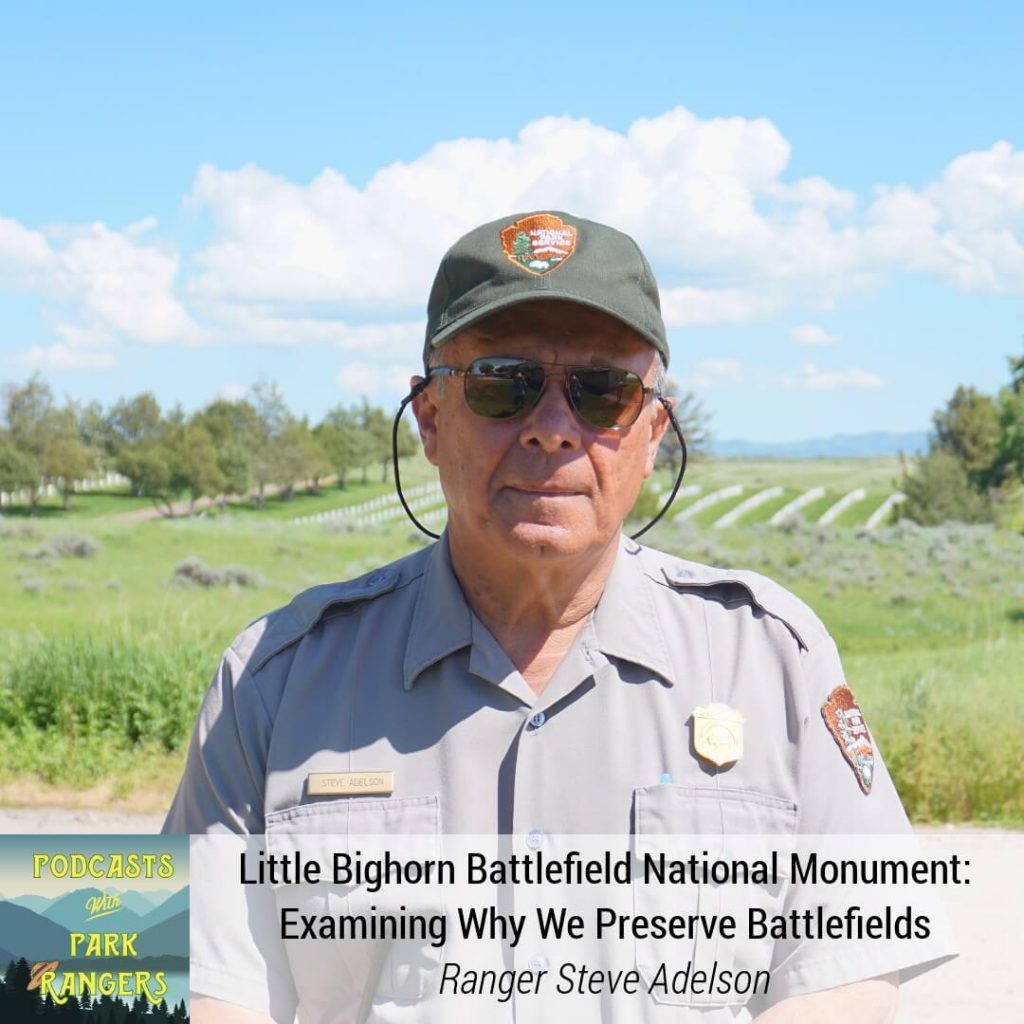 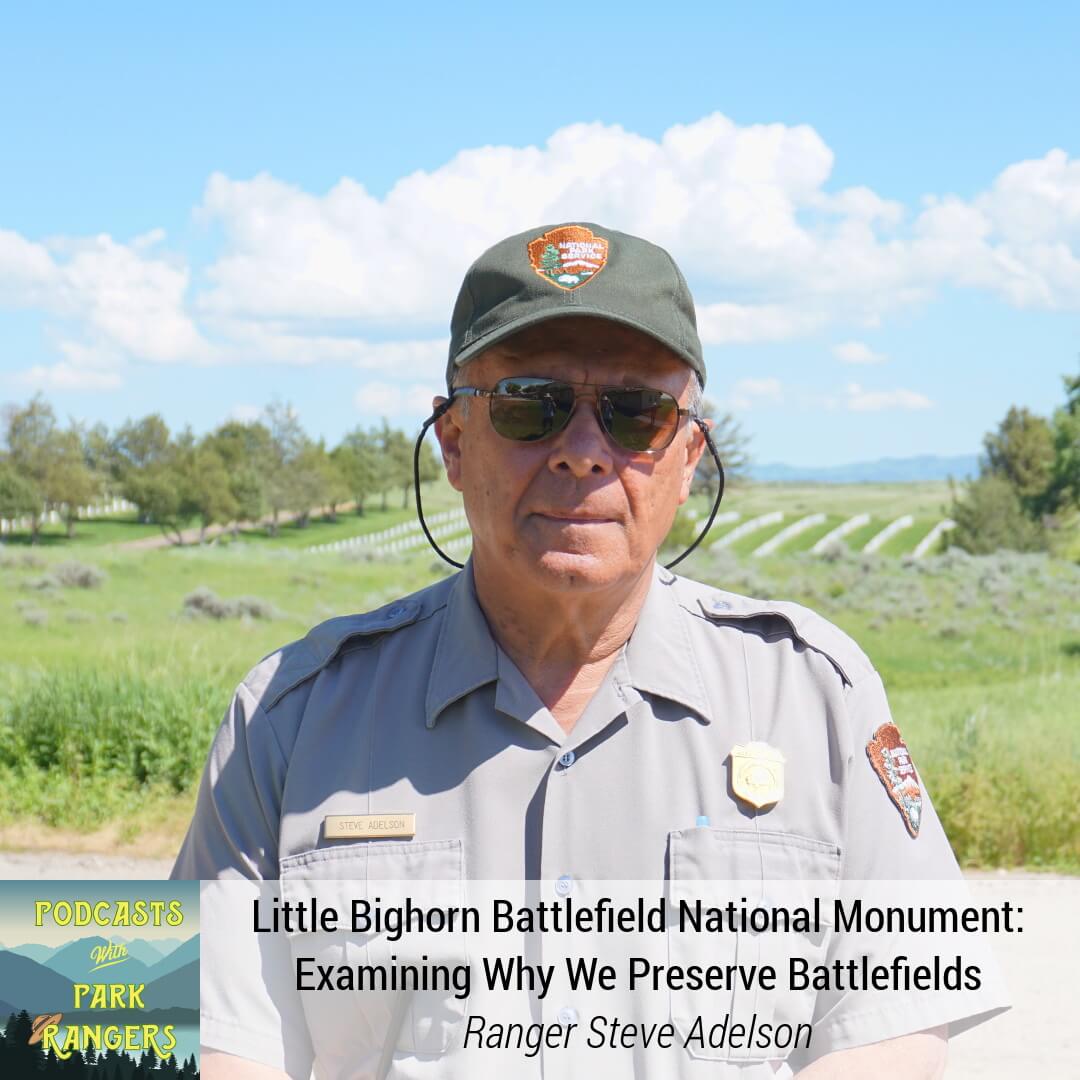 The Battle of Little Bighorn is one of the most written about and mythologized battles in US history. On this episode of Podcasts with Park Rangers, we talk with Ranger Steve Adelson about Custer’s Last Stand, the evolution of the National Monument, and why we preserve battlefields.

Ranger Steve has a deep love for history that began in childhood when his grandmother gifted him a set of Encyclopedia Britannica books. The books served as his first exposure to the story of the Battle of Little Bighorn.

During both graduate school and later in life as a professor at Montana State University, he’s both studied and taught about the Battle of Little Bighorn. Now that he’s retired, Ranger Steve naturally transitioned into a seasonal Park Ranger position at Little Bighorn Battlefield National Monument for the past 9 seasons.

US Events Leading up to the Battle of Little Bighorn

The US economy tanked in 1873, which resulted in a stock market crash, massive unemployment, and people desperate for new opportunities.

General George Armstrong Custer goes into the Black Hills of South Dakota in 1874 under the guise of looking for a fort site. However, they were really searching for gold. And, they found it.

Gold miners and prospectors flood the Black Hills. However, this is a problem because the United States doesn’t own the land. The Treaty of 1868 awarded the land to the Sioux Tribe, which made it illegal for white people to be in the Black Hills of South Dakota.

So, President Grant finds himself in a dilemma. He initially tried to stop the intrusion and he also tried to buy the Black Hills for $6 million. Since the land is sacred to the Sioux, Sitting Bull and other tribe leaders shot down the offer.

Miners refused to leave the Black Hills because they were desperate for economic opportunity. Thus, the United States issued an ultimatum for the Sioux to return to their reservations by January 31st, 1876, or be considered hostile.

In protest, Sitting Bull, Crazy Horse, and many other Sioux leaders move into the Unceded Territory in Montana. The government allowed the Sioux to hunt in this territory, but they weren’t allowed to live there.

So, Chief Sitting Bull decided since they couldn’t stay in the Black Hills, they would live in the Unceded Territory illegally rather than move to a reservation.

In response, the United States sent 3 columns of the military into the Unceded Territory to force the Sioux onto the reservation or fight.

Living on the Little Bighorn River

Around 7,000 – 8,000 people are on the banks of the Little Bighorn River. Of those, 1,500 – 2,000 warriors inhabit the migrant village. Many notable warriors are present that day: Sitting Bull, Gall, Crazy Horse, Crow King, Rain in the Face, along with many others.

The tribes are aware of the military’s search for them. However, Crazy Horse just won a battle against 1,000 soldiers 30 miles away. Spurred by confidence, they continue to camp on the banks of the river.

The government ordered the military to move the Sioux and other tribes onto reservations. However, they demonstrated over and over again, if they found the villages the inhabitants would scatter with no way of containment.

They originally planned to attack during the winter when the villages were less mobile. A couple other columns of the military are in the area early, and successfully carry out the mission.

General Custer employed several Crow and Arikara scouts to help them find the tribal villages. Many wonder why would they help put other Native Americans on reservations? The reason is that both the Crow and Arikara hated the Sioux.

The Sioux inhabited the Crow Tribe’s land along the Little Bighorn, and they wanted it back. But because of the Sioux’s numbers, they didn’t have the manpower unless they aligned with the US military.

The Arikara constantly fought with the Sioux in the past and after many lost battles, they wanted to exact vengeance. So, they also joined the US military.

As it goes, even though the Sioux go on to win this battle, they lost the war and are forced onto reservations. Today, the Crow own the land where the Battle of Little Bighorn was fought, so they accomplished their goal in the end.

At 4:30 AM, Custer’s men camp in the mountains surrounding the valley of the Little Bighorn River when Crow scouts see the smoke from the teepees. They’re convinced of a mass village below, and tell Custer to look for “worms in the grass”. The “worms” they speak of are the 20,000 horses accompanying the tribe encampment.

Advice to Custer is divided. Some of the Crow scouts think there are too many Sioux, others think they will scatter if they attack. However, Custer gets news the Sioux and Cheyenne spotted them. So, rather than rest and take time to decide, he starts the soldiers down the mountainside for the attack at high noon.

Custer found the land itself difficult to maneuver in for an attack. Many of the bluffs and ravines made it easy to hide, but not so easy to negotiate for a battle.

As the day progresses, spirits are high in the Sioux camp after Crazy Horses’ win the previous week. Celebrations occurred the night before, and families gather along the river to play and work for the day. It almost seems idyllic right before the battle descends.

At 90 degrees, the sun beats down on the soldiers as they begin the attack at high noon. Custer separates his command: Frederick Benteen goes south to scout and Marcus Reno separates to attack the village head on because Custer believes the Sioux and Cheyenne are running.

These 3 men hate each other’s guts, so you might imagine the separate commands might struggle to trust one another.

Custer promises Reno he’ll have the whole outfit’s support on his charge. As Reno leads 140 men into the village, he quickly begins to realize the Sioux and Cheyenne aren’t running and he’s faced with a huge force. Reno had very little experience, and most likely panicked before he even needed backup.

Reno was right though, Custer’s outfit would never return.

Where does Custer go?

Custer moves north onto the bluffs to see down into the valley and watches Reno advance. However, he has trouble penetrating the Cheyenne camps as he encounters quicksand along the way.

Custer employed this strategy before to his advantage during other battles with Native Americans. So, even though not a soldier from his outfit survived, this is accepted as the most likely reason he went north.

How Do We Know What Happened Next?

At a high level, Reno ends up retreating back to Benteen. These two will testify about the events of that day, but they’re unclear on Custer’s intentions and movements because the General never shared anything with Reno and Benteen. However, what we gather from these two is a scene of utter chaos.

Sioux and Cheyenne warrior witnesses are able to piece together the day’s events on Last Stand Hill. And then in 1984, a fire at Little Bighorn Battlefield creates an opportunity for archaeologists to corroborate Native American accounts with thousands of artifacts.

Using forensics and archaeology, the artifacts found on the field after the fire build a more solid picture of events than ever before.

With over 1500 different Native American accounts of events spanning the battlefield over a mile in size, it’s difficult to piece history together. Each warrior had his own perspective of how the battle played out.

However, the way in which Custer died at the Battle of Little Bighorn is clear. After he attempts to head north, the Sioux and Cheyenne overrun his soldiers. Slowly, they are forced to retreat to Battle Ridge and dig in atop Last Stand Hill.

The Sioux and Cheyenne shot their horses so Custer and his soldiers had no quick escape, and within a matter of 10-15 minutes, the whole outfit dies on the retreat or on top of the hill.

Why Visit the Battlefield?

Plenty of books are written about the Battle of Little Bighorn. However, it’s difficult to figure out how a battle occurs without walking the terrain. Ranger Steve describes it as trying to paint a picture into thin air without a canvas. You must have a canvas, and that’s the land.

It’s easier to understand Custer’s tactics, how it fell apart, and the sheer scale of the battle when you visit the Monument.

The Evolution of Research on the Battle of Little Bighorn

Custer’s Last Stand is one of the most mythologized pieces of US History because we don’t know exactly what happened on Last Stand Hill. However, the way we understand the battle has changed.

The fire in 1984 helped archaeologists build a better picture of the events, and more credence is lent to warrior accounts now than in the past. Racism and distrust being the major causes for why historians brushed off Sioux and Cheyenne testimony for decades up until the ‘60s.

An Indian memorial dedicated in 2003 recognizes the Native Americans who fought in this battle and many others in a desperate attempt to hang on to their way of life. The memorial helped calm anger and resentment amongst Indian people and white people which existed at the Monument for over 100 years. Now, a new peace takes over in its place.

A unique feature on the battlefield are markers for fallen soldiers. Ranger Steve emphasizes many are not exactly accurate, because they placed them 15 years after the battle.

The markers show only fallen US soldiers. So, in the early ‘90s, the Park Service placed 17 markers to commemorate the Sioux and Cheyenne who also died in battle that day in places where their families believe they fell.

Battlefields deal with human drama, catastrophe, and loss. Is there anything more powerful in the human experience than death and sacrifice?

If we can’t commemorate and honor what men fought and died for, we may risk losing who we are as a people.

What Lessons Can We Learn From the Battle of Little Bighorn?

We need to learn to not be so judgemental in how we look at the way other people live. The reason this happened is a clash of cultures. One culture attempted to dominate and extinguish another because they didn’t have the ability to step back and dismiss their own judgments.

Steve’s Passion for Little Bighorn National Battlefield and the NPS

This is a story about humanity and human suffering. Ranger Steve wants people to feel what happened and emotionally connect with the enormity of loss and suffering as the result of the conflict, and to have people know what it was like to be there that day.

The National Parks are an essence of our heritage and who we are. To maintain and preserve these places provides an opportunity to understand where we’ve been and where we’re going in a democratic society.

All of our public lands are in search of volunteers. Whether it’s with the Bureau of Land Management, the US Forest Service or the National Park Service which includes Little Bighorn Battlefield National Monument, there’s probably a volunteer opportunity in your area. Find out more information by visiting Volunteer.gov