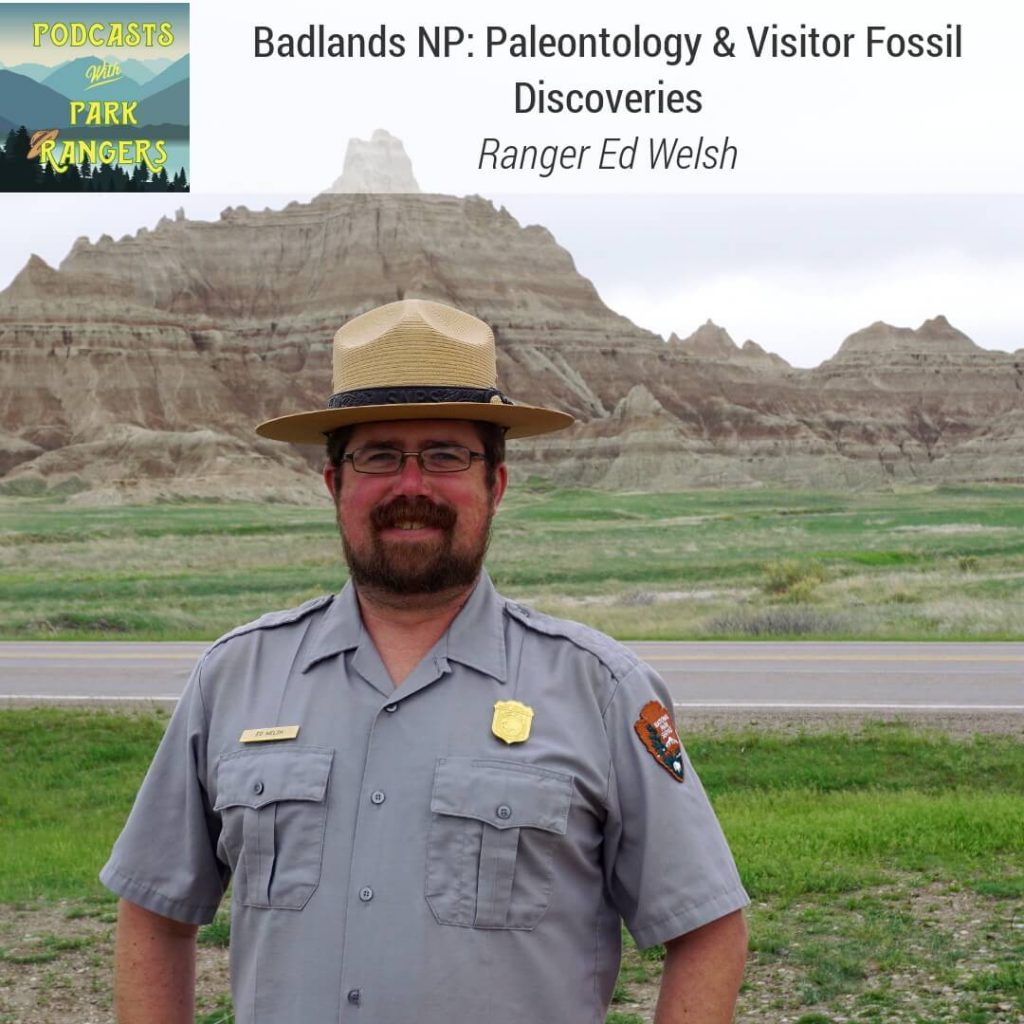 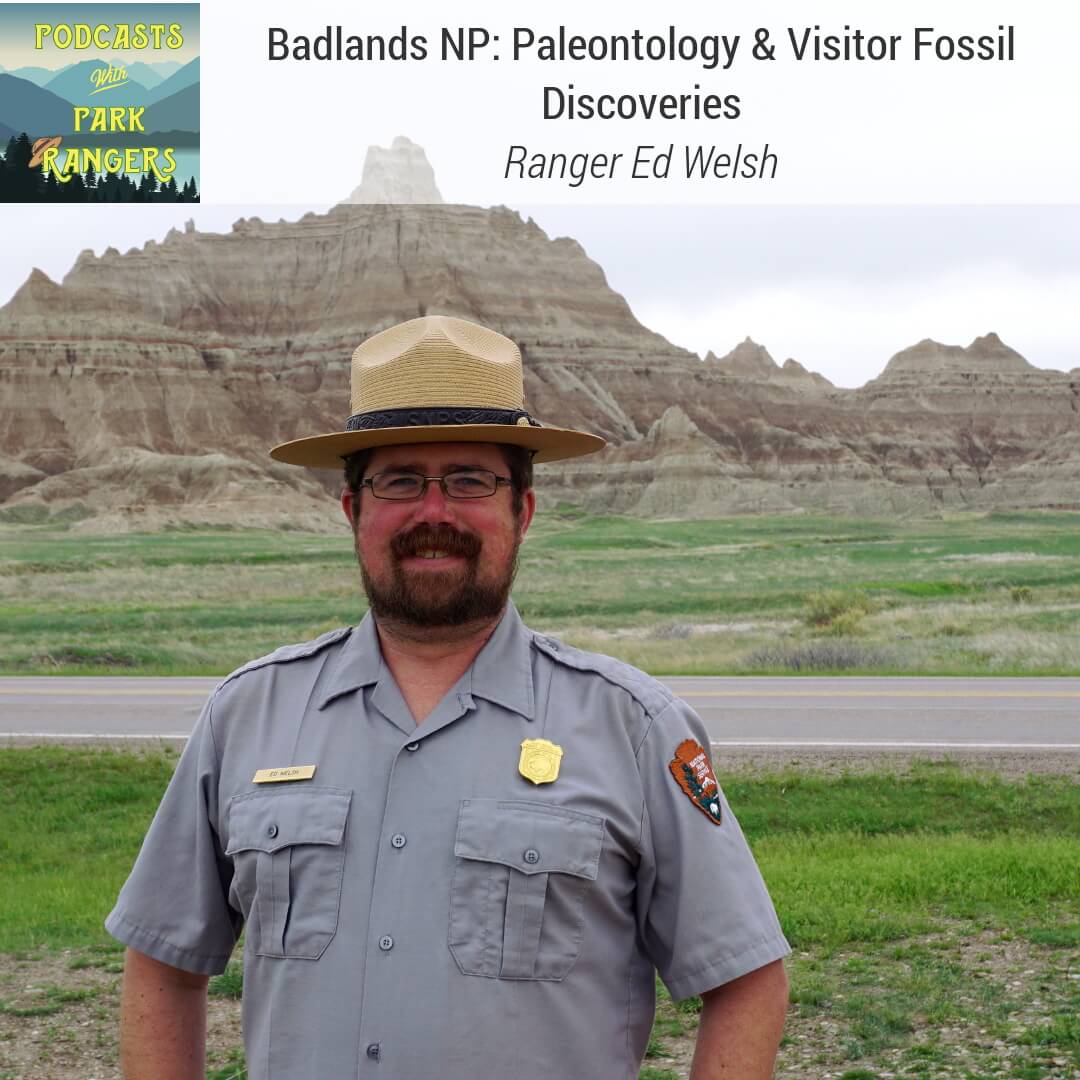 Did you know the birth of American Paleontology occurred at Badlands National Park? The park is home to one of the largest mammal fossil caches in the world and attracts scientists from all over.

On this episode of Podcasts with Park Rangers, we talk to Interpretive Ranger and Paleontologist Ed Welsh to discover more about North America during the age of mammals, and how you as a visitor can discover fossils too!

Ranger Ed has been with Badlands National Park for 6 years, and it’s his one and only park. Many Rangers like to move around, but Ed’s skillset works best at the Badlands because he has a Masters in Paleontologist.

He started as a seasonal doing monitoring and mitigation to make sure fossils remained intact during renovation work and fossil digs. The Chief of Interpretation loved how Ed worked with the public and moved him into Resource Education as an Interpretive Ranger.

Ed is involved in field trips with grade schoolers and in distance learning over Skype — which has an international scope.

Jagged spires in a rainbow of colors dominate the landscape in hues of grey, tan, brown, red, yellow and white. The time frame represents the time of mammals — between humans and T-Rex — starting approximately 30 million years ago. A trip through the park is like traveling through time.

The park started as a National Monument due to the unique landscape, the geology, and the history of paleontology. However, the establishment of the monument has evolved, and the scope of resources has expanded include wildlife protection and archaeology dating back to pre-Columbian native cultures.

In 1978 the Monument became a National Park.

Why are they called the Badlands?

Ranger Ed jokes: Because they are ill-behaved. In all seriousness, it’s because the land is difficult to traverse in the period before paved roads didn’t exist. The high temperatures and clay-laden waters made it a difficult place to live.

Several cultures call it the Badlands, the most prominent being the Lakota and the French Fur Trappers. This name stuck for several hundred years and continues today.

Geology of the Badlands

As discussed previously, the land is composed of several colorful layers, which represent different time periods in history.

The black shale and sediment under the formations are from the Cretaceous Era (145-66 Million Years Ago). It gives the land a generally dark hue — this is where the Black Hills of South Dakota get their name. The shale comes from an ancient seabed. There’s only sea life found in this layer, but now the Badlands is 2400 feet above sea level: what happened?

North America as we know it slams into the Pacific Plate to create the Rockies, the Front Range, the Laramie Range and the Black Hills. The Midwest is now above sea level, and they create a basin for the current area.

The yellow mounds are from the Mesozoic era, which is before and including the Cretaceous era. On top of that, is the Badlands. There are three main layers, from bottom to top:

Currently, all these formations are eroding away. Rivers block new sediments from settling in the Badlands. Wind and gravity also contribute to the erosion to the tune of ¾ an inch per year. Which washes away to the Gulf of Mexico via the Missouri River.

Fossils in the Badlands

The geologic layers that make up the Badlands contain a lot of fossils.

Steps to becoming a fossil:

Fur Trappers in the early to mid-1840s found some of the first fossils in the Badlands. The fossils were described in publications and the Smithsonian sent Thaddeus Culbertson to collect fossils for the museum in DC.

Joseph Leidy, the father of American Paleontology, describes the fossils that Culbertson sent to the Smithsonian. He’s also is credited as the father of Forensics studies. In 1847, Leidy names the first prehistoric camel in North America, and in 1858 he names the first dinosaur found in New Jersey.

News of the fossils spreads in the science community, and a student of Leidy’s, Edward Cope, discovered fossils at both the Badlands and John Day Fossil Beds National Monument. His rival, Othniel Marsh, names many dinosaurs found at Jurassic excavations like Dinosaur National Monument.

The Chadron Formation is thought to be quite wet and swampy. We can tell because alligators are found in the fossil records of that layer. What types of places have alligators today? Places like Louisiana or Florida, which are wet, warm and swampy.

Other National Parks like Big Bend, Butte National Monument, and Theodore Roosevelt National Park have similar fossils around the same time period. That tells us that North America was wet and tropic with lots of forest and jungle.

The Chadron formation contains crocodiles, alligators, primates and other evolving mammals. After the Chadron, it gets a bit drier and cooler, because alligators disappear from the fossil record.

After the Chadron we find:

Carnivorous animals are also beginning to evolve. They are split into two groups:

The fossil record demonstrates the evolution of modern mammals as they are known today.

How do we know when the climate changed?

After the Chadron Formation and into the Brule formation, we see evidence of tortoises. They don’t require water but are a great climate indicator because they require a certain body temperature to survive. The area is still warm, but cooling.

The grassland ecology in the Brule Formation also indicates a drier, cooler climate.

Three-toed horses are found in the Brule, and as time continues their middle toe gets bigger, the outer get smaller, and they become a one-toed hoofed mammal related to the modern horse. Their teeth also evolve better use on grasslands.

Carnivores like the Creodonts and Hyaenodons show up in the fossil record, which is typical in a tropical climate. They compete against saber-toothed cats and Entelodonts for food.

Animals must do three things to survive a changing climate:

In some of the exhibits at Badlands National Park, we can see coat colorations of various animals. We may not know if that is true, however, modern-day biology might be able to tell us.

We know there were tsetse flies in this time period. Many African animals have a difficult time with this insect due to disease, except zebras. It’s hypothesized the stripes might keep the flies away. So, prolific herbivores like oreodonts or three-toed horses might survive tsetse flies because they had a striped pattern.

Of course, this means the exhibits in the Badlands is inaccurate because it’s possible those animals were striped.

The Badlands has an open hike policy, and because of the high rate of erosion visitors can discover fossils for further study.

If you find a fossil:

Ranger Ed published scientific articles based on fossils that visitors have found, so their discovery is contributing towards the study of paleontology today.

A photographer from Iowa found rhino bones on the side of the road near a picnic area on an afternoon walk. During excavation, they found more rhino skeletons, resulting in 19,000 specimens found. All because a visitor reported that initial rhino fossil.

No other Badlands site comes close to the number of fossils found there.

Ed’s Love for the Badlands and the NPS

He sums up his love for the Badlands with a John Muir quote: “When we try to pick out anything by itself, we find it hitched to everything else in the universe”. It really describes the park, and how everything is connected together.

The Badlands makes Ranger Ed feel very humble because we’re only here for a fraction of a second if you examine man’s blip of existence from the beginning of time. It’s an honest humility and not bad thing!

The places preserved in the NPS are very unique, and you won’t see them anywhere else in the world OR in another National Park.

The geology or paleontology draw people into Badlands National Park. And, at first, they might think the park is a one-day “drive-thru” park, they might find there is a lot more to learn and stick around for a couple more days. It’s truly a special park.

Have you ever browsed the bookstore at a National Park? The majority of our Parks, including the Badlands, offer a place to purchase souvenirs and books to remember your journey. The proceeds from your purchase go directly back to the park to help with maintenance, new purchases and more! Next time you visit the parks, be sure to stop by the bookstore to help support the places you love!